Memory chips store data as a string of ones and zeroes. Today, most memory chips are based on silicon and come in two basic types, volatile and non-volatile. Volatile memory, such as random access memory (RAM), offers fast but temporary storage. When the power shuts off, the zeros and ones vanish. Non-volatile memory, such as the flash memory in cell phones, is slow but stable. Even if the battery expires, the data remains.

In one experiment, Wong worked with postdoctoral fellow Seunghyun Lee and Ph.D candidate Joon Sohn on a technique known as resistive random-access memory (RRAM) to demonstrate the possibility of constructing non-volatile RRAM while densely storing data without consuming more energy. 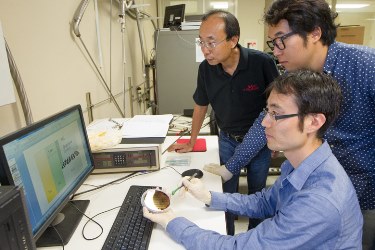 Stanford engineers are developing high-capacity, energy-efficient memory chips that are not based on silicon. Image credit: Norbert von der Groeben.In RRAM chips, tiny jolts of electricity switch certain metal oxides between resistive and conductive states. When the metal oxides resist the flow of electrons, a zero is created. When the materials conduct electrons, a one is created. RRAM is fast, like volatile silicon memory, but like flash memory it retains stored data when the power is turned off.

The Stanford team pioneered the use of graphene as the conductive metal to carry the jolts that switch the resistive materials between zero and one. Unlike conventional metals, graphene remains conductive at atomically thin dimensions. This allows engineers to make each RRAM cell much smaller than was previously possible, leading to chips that hold more data than was possible with RRAM based on conventional metal conductors.

In phase-change memory, a jolt of electricity causes an alloy of germanium, antimony and tellurium to change its atomic structure. One jolt tweaks the atoms into a regular, crystalline structure that allows electrons to flow, notated as a digital one. A second jolt makes the structure irregular, or amorphous, creating a zero. Each jolt toggles the phase-change material from one to zero. Like RRAM, it retains its stored data when the power is turned off.

In the Applied Physics Letters paper, Pop led a team that included former students at the University of Illinois Urbana-Champaign and collaborators at the Universities of Modena and Bologna in Italy. They used ribbons of graphene as ultra-thin electrodes to intersect phase-change memory cells, like skewers spearing marshmallows. This setup also exploited the atomically thin edge of graphene to push current into the material and change its phase, again in an energy-efficient manner.

These studies show that graphene is far from a laboratory curiosity, they say. The material's unique electrical, thermal and atomically thin properties can be used to create more energy-efficient data storage—whether to extend the battery life of mobile devices or to create data centers that use far less energy.

By posting a comment you confirm that you have read and accept our Posting Rules and Terms of Use.
Advertisement
RELATED ARTICLES
New Ultrafast Flexible and Transparent Memory Devices Could Herald a New Era of Electronics
Watch: Mass Production of Microscale Robots
Year In Review: Graphene Advancements in 2017
Analog Computer Chip Cuts Power Demand
Innovative Cooling Process for Refrigeration
Advertisement