Scientists deemed more trustworthy when presenting their own work via video

A new study from North Carolina State University found that viewers of science videos respond positively to researchers who present their own work versus those presented by third-parties.

“We wanted to see how effective researchers could be at presenting their own work in science videos aimed at the public,” said Selina Ruzi, co-corresponding author of a paper on the work and a postdoctoral researcher at North Carolina State University. “We found that scientists seem to have an advantage when it comes to presenting their work.” 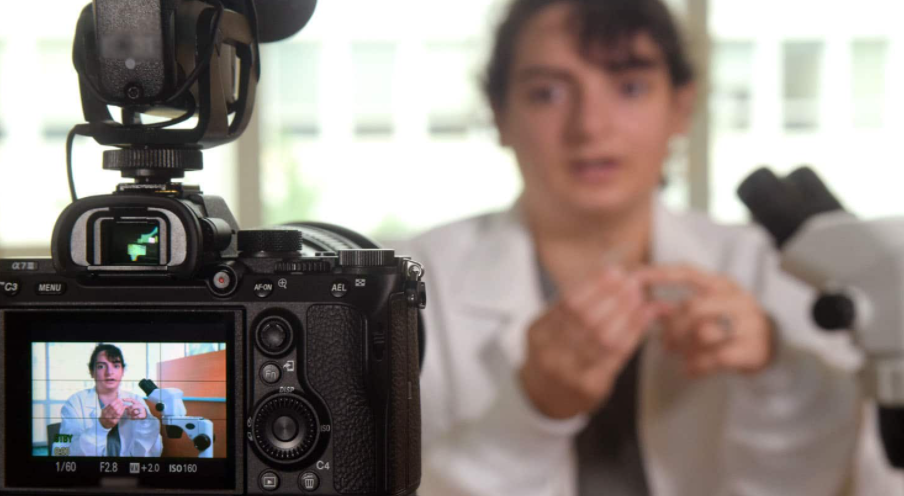 After watching the video, participants completed a survey that asked them about the video, the presenter, and their views on science and scientists.

“We also found that participants who saw researcher-presented videos were more likely than people who saw the other videos to phrase survey responses in a way that made it clear that a person had done the research, as opposed to using language that suggested the research was done in a vacuum. First-person accounts helped humanize the science.”

While researcher-presenters were seen as having more expertise than third-party narrators, the choice of presenter had no impact on how participants viewed the overall trustworthiness of the video or how much they enjoyed it. Nor did the presenter affect a participant’s views of scientists in general or funding for research.

“I think the finding here is fascinating, because we found that there were clear effects from what were actually very tiny differences between videos,” said Adrian Smith, co-corresponding author of the work and a research assistant professor of biological sciences at NC State. “The only real difference between the researcher videos and third-party videos were a few instances of speaking in the first person versus speaking in the third person.

“This tells me that scientists have an automatic leg up when it comes to reaching people via science videos. If we want to convey expertise and build trust, we have an advantage when we provide our own perspective and tell our own stories.”

From a practical standpoint, reaching a large audience can help researchers comply with public communication requirements in grant agreements — such as the “broader impacts” requirements included in grants from the National Science Foundation. Public outreach is also associated with increases in scholarly metrics.

“This doesn’t mean that all researchers have an obligation to engage in public communication efforts,” said Smith, who also heads the Evolutionary Biology & Behavior Research laboratory at the North Carolina Museum of Natural Sciences. “And there is clearly a need for professional science communicators.

“Rather, we think this research highlights an opportunity for scientists who are interested in public engagement efforts. And we think these findings could inform how professional communicators work with scientists to highlight their research.”

The study collaborators say there are two clear lines of research moving forward.

“For one thing, the videos in this experiment were about the discovery of an obscure species of ant that would be unimportant to viewers,” Ruzi said. “What happens when the subject matter is something that is immediately important or relevant to them? Something that affects their health or well-being?”

“It’s also worth exploring whether repeated exposure to more researchers presenting their work in the first person contribute over the long term to more positive views of scientists in general or to increased support for research funding,” said Smith.

The paper, “Testing How Different Narrative Perspectives Achieve Communication Objectives and Goals in Online Natural Science Videos,” is published in the journal PLOS ONE.

Re: Scientists deemed more trustworthy when presenting their own work via video
#1

Re: Scientists deemed more trustworthy when presenting their own work via video
#2

The scientist will always be biased towards the big donator of money for the research information, so reality is, the scientist will inevitably be biased with information. There is no 'real' information being passed on. All is manipulated and that is how the world today works. The day a scientist states the unbiased truth will be the day he or she looses their job, and no one will believe a word and they will be ridiculed. Bob Lizar, Ed Snowdon, Mark Felt.