Mitsubishi Power is developing combustion equipment that can utilize ammonia, which does not emit carbon dioxide, as a fuel. By promoting the use of ammonia as an alternative to coal and other fossil fuels typically consumed in thermal power stations, this system will support the decarbonization of thermal power generation.

The company has conducted tests using basic combustion test furnaces that simulate the combustion conditions of coal-fired boilers in power stations. These tests were used to compile basic data on ammonia and coal co-firing and ammonia-exclusive firing. The data were used to identify optimal systems and conditions for combustion and improved understanding of nitrogen oxides generation, which is a concern for ammonia firing, and the potential for unreacted residual ammonia to be released outside the power generation system. 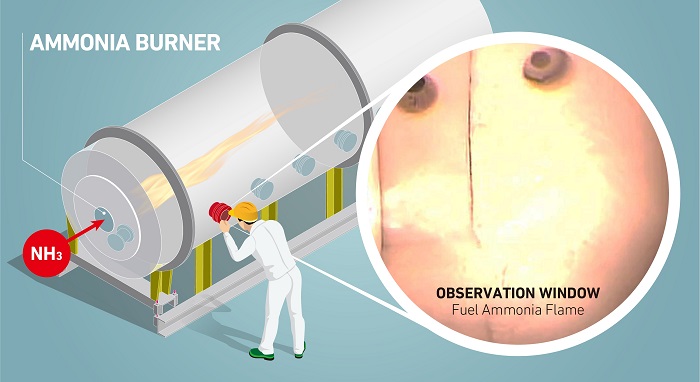 Additional combustion tests for ammonia and coal co-firing and ammonia-exclusive firing using a small-scale combustion test furnace confirmed that flames remained extremely stable during combustion, as NOx emissions were as specified by the basic combustion test target, and there were no residual ammonia.

Based on these results, Mitsubishi Power plans to demonstrate the technology using a full-sized combustion system and take steps to implement the technology at an existing facility, with the aim of gradually introducing the ammonia fuel to the industry.

Where does the ammonia come from? Does the manufacture of the ammonia leave a carbon footprint?

Further, use of NH3 as fuel is net energy consuming: "...Each metric ton of ammonia packs about 5 MW h of energy. “The best, most efficient Haber-Bosch plants work at around 10 MW h per metric ton of ammonia,”..." __ https://cen.acs.org/environment/green-chemistry/Industrial-ammonia-production-emits-CO2/97/i24