Ammonia is produced through the catalytic reaction of nitrogen and hydrogen combined over an iron catalyst at high temperatures and pressure via the Haber-Bosch process. This process — so named for German chemists Fritz Haber and Carl Bosch who developed it back in the early 1900s — is still widely in use today.

While the Haber-Bosch process is used predominantly for the production of ammonia, which is then used to manufacture fertilizers for the agricultural industry, ammonia production is reportedly environmentally unfriendly, so to speak.

As such, engineers and chemists the world over have sought to make the ammonia production process a green process. Assorted efforts to accomplish this include wind or solar powered electrolysis of water, powering reactions via renewable energy sources to produce hydrogen without fossil fuels and more. Follow along with Engineering360 to see some of the ways experts in the chemical manufacturing field are attempting to make the manufacture of ammonia greener. 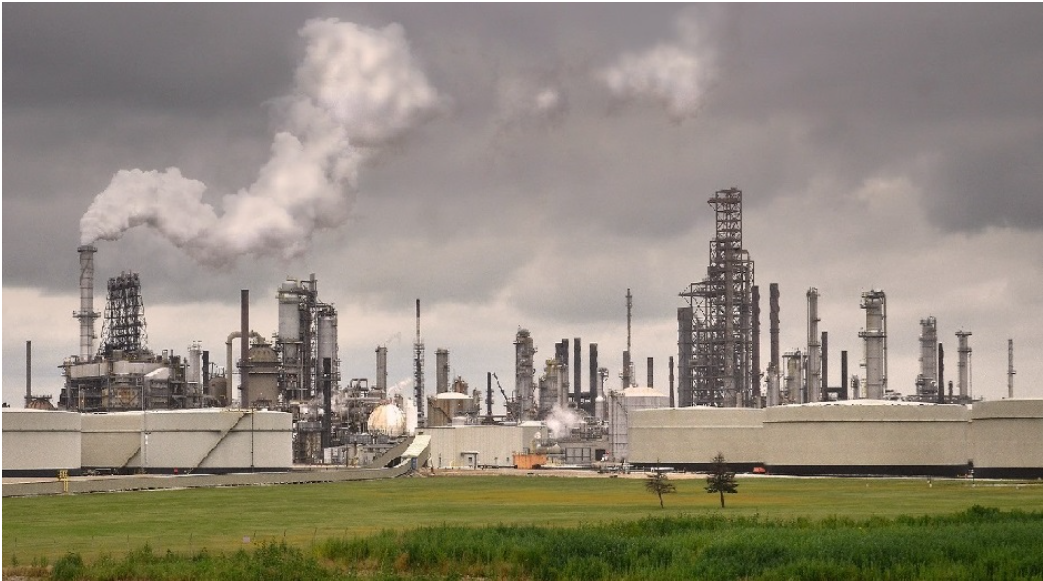 The current method for producing ammonia is the energy intensive, carbon dioxide (CO2) emitting Haber-Bosch process, which converts hydrogen and nitrogen into ammonia to make fertilizers and other products — such as pharmaceuticals, plastics, textiles and explosives, for instance.

Preventing the Haber-Bosch process from being a green process is the use of hydrogen, which is a raw material that is fossil fuel-derived from sources such as natural gas, oil or coal via processes that release CO2.

Researchers from the Japanese company JGC are working to develop a green ammonia plant that runs on solar power, produces hydrogen via water electrolysis and generates a Haber-Bosch-like reaction using a ruthenium catalyst developed in house.

According to its developers, this process produces hydrogen at significantly lower pressure than standard processes and, consequently, the plant does not require the output of a lot of energy to pressure the system. 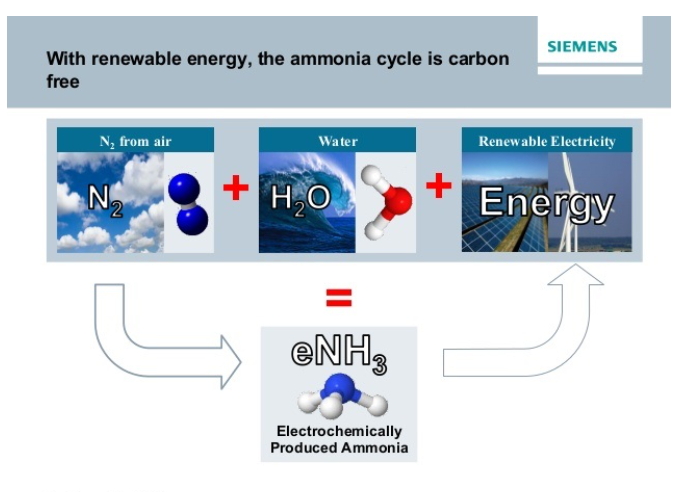 Siemens, working in conjunction with universities throughout the U.K., such as Oxford University, are using a wind-powered Haber-Bosch process to produce ammonia. At its small demonstration plant, dubbed The Green Ammonia Energy Storage Demonstrator in Oxfordshire, U.K, the researchers showed that the plant takes electricity from a wind turbine, runs it through a hydrogen electrolysis unit and the resulting hydrogen produced is then used to synthesize ammonia.

A researcher from Australia’s Monash University is aiming to replace the Haber-Bosch process with its newly developed fuel cell that converts renewable electricity into carbon-free ammonia. According to its developers, the stainless-steel device from Monash features two plastic tubes that feed the device nitrogen, gas and water while a power cord supplies electricity. Meanwhile, a third tube on the front of the device emits gaseous ammonia, all without the heat, pressure and carbon emissions generally necessary to make the chemical. In other words, the device essentially breathes nitrogen in and breathes ammonia out.

Researchers from the Korea Institute of Machinery and Materials (KIMM) have devised a technique for creating a zero carbon emissions process via renewable energy, producing ammonia at room temperature and with the application of normal pressure. This process, according to the researchers, could bring researchers one step closer to achieving carbon neutrality in the future. 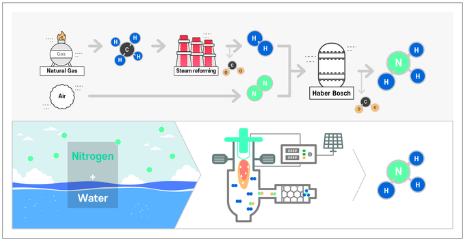 Instead of using the Haber-Bosch process usually employed in the making of ammonia, the researchers combined water with nitrogen plasma, producing hydrogen and nitrogen oxides. According to the researchers, the oxides can be reduced to ammonia with hydrogen via catalysts. For instance, 99% of the nitrogen oxides produced in the plasma reaction become nitrogen monoxide, which can then subsequently be further reduced to ammonia because nitrogen monoxide reacts with hydrogen to produce ammonia with 95% high selectivity.

A research team led by the University of Colorado Boulder, the National Renewable Energy Laboratory and the University of Nottingham (U.K.) claims it has made progress in advancing a microbial means of carbon dioxide capture that could one day lead to more eco-friendly fuel and chemical production methods.

To accomplish this, the team activated specific enzymes within microbial cells using light-activated quantum dots. This, according to the team, led to the creation of nanobio-hybrid organisms that convert CO2 into items such as biodegradable plastic, gasoline, biodiesel and ammonia.

Upon exposure to sunlight, nanoscopic quantum dots diffused into common microbial species in soil, driving the renewable production of different biofuels and chemicals using CO2, water and nitrogen from air as substrates. No external energy or food sources were required to accomplish these energy-intensive biochemical processes.

The researchers suggest that this technique can be customized to produce specific products. Combining quantum dots and green wavelengths encourage bacteria to consume nitrogen and produce ammonia.

Researchers from Massachusetts Institute of Technology (MIT) have devised a sustainable alternative for fertilizer production. According to the researchers, a decentralized approach to ammonia production would help both reduce greenhouse gas emissions and the high costs linked to current manufacturing facilities while offering remote and rural users access to fertilizer products. 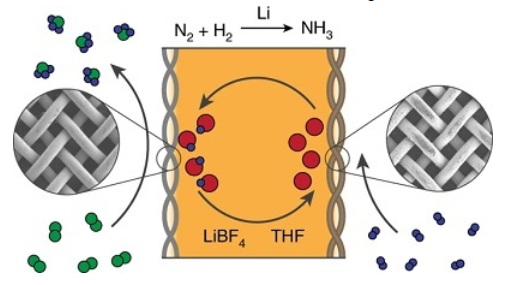 The nitrogen admitted by the mesh is converted to ammonia through a series of reaction steps mediated by lithium. Source: Nikifar Lazouski et al.

As an alternative to the heat-intensive Haber-Bosch process, the MIT scheme uses electric current to produce a lithium catalyst where the reaction occurs. To eradicate reliance on expensive organic solvents, the researchers created a stainless steel, mesh electrode that enables nitrogen gas to diffuse through and interact with hydrogen, which is then dissolved in ethanol at the surface of the electrode. The nitrogen admitted by the mesh is then converted to ammonia via a series of reactions mediated by the lithium.

This list is by no means exhaustive. It includes just a handful of the many efforts currently underway in the search for a greener ammonia production process. Check back with Engineering360 for more developments in the chemical processing industry as well as other technological innovations.

By posting a comment you confirm that you have read and accept our Posting Rules and Terms of Use.
Advertisement
RELATED ARTICLES
New process produces ammonia with zero carbon emissions
Imitating Nature to Produce Ammonia
A process for decentralized ammonia fertilizer manufacturing
New Method For Producing Ammonia is Eco-friendly and Happens on the Small-scale
Ammonia, Renewables Combine in Energy Storage Demonstrator
Advertisement