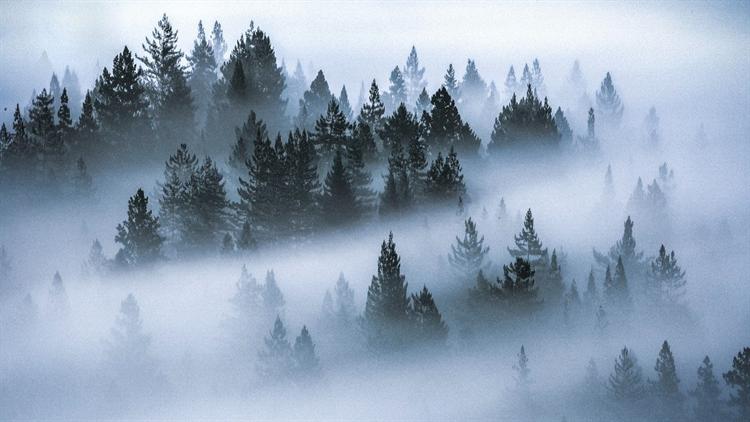 Natural carbon capture, supplied by dense forests and foliage, can't keep up with the current rate of CO2 emissions.

As each day passes, the worldwide call for sustainable energy seems to get louder. The price of carbon emissions is increasing, funding is more widely available for renewable energy projects, and residential power solutions are on the rise. While strides are being made in sustainable technology and policy, the worldwide CO2 emissions have never been higher.

The International Energy Agency (IEA) recently released the Net-Zero by 2050 Roadmap to provide a path for the energy industry to follow in achieving sustainable energy production. This report illustrates that switching to renewable energy will likely be the primary source of emissions reduction. However, the report also highlights the need for other methods to be utilized in reducing CO2 output. These methods include a large increase in the utilization of carbon capture and storage (CCS) technologies.

CCS offers a few distinct advantages that make it a useful technology in the sustainable energy battle.

First – CCS can retrofit existing power plants. This makes it a viable solution to CO2 emissions reduction while renewable energy capacity is being built.

Forms of CCS occur naturally. For example, trees remove CO2 from the air and store it in the form of new trunks, stems, and roots. Unfortunately, the world is producing CO2 at a much higher rate than natural processes can handle. Man-made CCS processes can help to handle the excess CO2 emissions.

As the name suggests, CCS can be broken down into two primary steps: 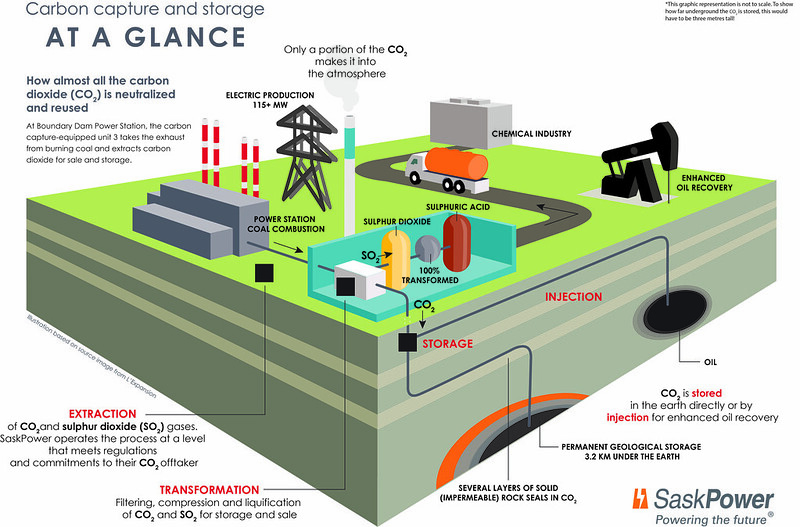 The goal of carbon storage is to permanently find a location for captured CO2 emissions to remain so that they are not released into the atmosphere.

Though the storage step of the CCS process is not typically as complex or costly as the capture step, it is not without challenges.

After being captured, the CO2 needs to be transported to the storage location. The most common method of CO2 transportation is through pipelines, however, ships, trains, and trucks may also be used in some cases. There are significant challenges associated with the transportation of CO2. Significant energy is required to compress the CO2 to manageable volumes, as well as to move the CO2 through pipelines. Additionally, this pressure requirement means that both CO2 pipelines and containment vessels are typically highly pressurized, which can lead to explosive failures and high-volume leaks.

Ocean storage was also once considered a viable solution, however, multiple regulatory bodies have banned this practice due to the potential acceleration of ocean acidification.

Geological CO2 storage refers to the storage of CO2 in underground formations, which may include depleted oil and gas reservoirs, saline formations, and coal seams.

As CO2 is injected at high pressure into deep reservoirs, the required volume of downhole storage is much less than that at the surface. As such, geological formations have the capacity for vast volumes of CO2 storage.

CO2 can also be used to aid in enhanced oil recovery operations. In this process, CO2 is injected into the oil reservoir, where it helps to push the oil into the producing well. Though this process results in some CO2 being trapped, some CO2 is also produced with the oil and thus this is not a carbon-neutral process.

Though geological storage options have huge potential storage volumes, they are not without their potential drawbacks. For example, concerns regarding the potential leakage of CO2 through the reservoirs have been raised. In a 2018 study, models illustrated that well-regulated wells would maintain minimal leakage for at least 1000 years. There is also the concern of induced seismic activity associated with high-pressure CO2 injection.

While planting more trees helps combat the effects of deforestation, this will likely not be fast-acting enough to provide the required CCS capacity.

Technology advancements in the area of microalgae growth show promise in the ability to act as a CO2 storage option. Certain algae have the ability to absorb CO2 and use it as a building material for rapid growth.

As a bonus, some microalgae are capable of being used as renewable biofuels. For example, a process known as Bioenergy with Carbon Capture and Storage (BECCS) has been modeled as a potentially negative emissions energy-producing technology.

Mineral CO2 storage refers to the process of converting CO2 into solid carbonates. This isn’t so much a storage location as a storage process. Once the solid carbonates are formed, they can be stored above ground in an environmentally safe location.

CO2 mineralization is accomplished by reacting the CO2 with metal-oxides. Typically these include magnesium and calcium silicates, which are abundantly available.

1) It has the theoretical highest storage capacity, with the ability to store all current CO2 emissions.

2) It is the safest storage method, as there is no concern of loss of storage capacity or leakage of emissions.

3) The mineralized CO2 can be useful. For example, solid carbonates can be used for construction materials, or in the production of Urea and Methanol.

However, mineralization is also a very expensive carbon storage method, even when the cost is offset by industrial uses. As such, it is not currently widely utilized.

Advances in technology are bringing new and improved methods of clean energy production. However, the rate of emissions worldwide continues to climb. If the world is to make the transition to sustainable energy, the energy industry will need to invoke a broad portfolio of measures and technologies.

Though not yet widely utilized, CCS can aid the transition from fossil fuel to renewable energy sources, as well as supplement a renewable-dominated energy industry.

One key to the effectiveness of CCS is the ability to safely and permanently store captured CO2. As technologies such as BECCS develop, the world may even be able to utilize CO2 as an unlikely ally in the renewable energy landscape.
Powered by CR4, the Engineering Community

By posting a comment you confirm that you have read and accept our Posting Rules and Terms of Use.
Re: Carbon storage - lending the forests a hand
#1

This seems to be much fear mongering, a nice scare tactic to fool people yet again. It is stated that the CO2 has never been higher. Clearly the graphs show otherwise and that CO2 is falling for the UK and Sweden. In S Africa and India the CO2 is rising.

In SA this is understandable given that ESKOM cannot produce electricity, nor supply enough for the population, so wood fires are most peoples backup or daily method of cooking.

India similar story, just with a heck of a lot more people and vehicles.

I am quite sure that the data and dates are a tad falsified too. For Sweden I see no figures for the pollution levels from the 10th century until 1992 when copper mining was a boom and all smelting was done with charcoal fires and trees were cut down for this charcoal. Therefore CO2 absorption was very limited and there should have been massive levels in your graph pre 2019. Your figures only start around 1880 so it is assumed that you have no figures for the period prior to 1880, making the basis that your figures are not true and selected to make a picture of doom and gloom.

Besides this, the idea to put CO2 back in the ground, clever as it may be, is not yet proven smart, clever nor viable. It is conjecture and theory at this stage as no one has any results as to what may happen, will happen or could happen once the CO2 is 'stored' in the ground.

Can it assist in moving the tectonic plates resulting in more earth quakes for some areas? Can it leak out of the ground and become a gas that rises up and chokes us? Methane, compared to carbon dioxide, which is the other major greenhouse gas, has a shorter lifespan in the atmosphere. However, this gas is more efficient in trapping radiation, which increases the heat. Methane (CH4), is a naturally occurring gas found in wetlands and soil.

So by pumping the mixture of CO2 into the ground, how can anyone be assured that this mixture does not lubricate the tectonic plates or surrounding rock formations, or find its way into the aquafers and underground water course, of which there are many, and create another havoc on the planet.

It has been proven, I understand, that oil companies pumping slurry mixes of water and oil back down wells, have been responsible for quite a few earth quakes, lubricating tectonic plates and causing devastation under the pretence of nature. What cleverness will prevent this happening with CO2 disposal in the earths mantle.

I am sure there are some who will like to have the assurances that pumping CO2 down into a hole id not going to come back and bite them or others, at a later date, on the butt, as so often has been the case.

Re: Carbon storage - lending the forests a hand
#3
In reply to #1
IQ

And no better time than the present, in a 'pandemic' of fear, to add more fear, to enhance the fear already instilled in this CO2 farce.

“Natural volcanic and man-made CO2 emissions have the exact same and very distinctive carbon isotopic fingerprint. It is therefore scientifically impossible to distinguish the difference between volcanic CO2 and human-induced CO2 from the burning of fossil fuels. This major problem with the AGW principle has been rationalized away by consensus climate scientists who insist, based upon supposedly reliable research, that volcanic emissions are minuscule in comparison to human-induced CO2 emissions (Gerlach 1991).

“Terrance Gerlach’s volcanic CO2 calculation was based on just 7 actively erupting land volcanoes and three actively erupting ocean floor hydrothermal vents (seafloor hot geysers). Utilizing gas emission data from this very limited number of volcanic features, Gerlach estimated that the volume of natural volcanic CO2 emissions is 100 to 150 times less than the volume of man-made CO2 emissions from the burning of fossil fuels and therefore of no consequence.

“To put this calculation process into perspective, the Earth is home to 1,500 land volcanoes and 900,000 seafloor volcanoes/hydrothermal vents. By sampling just an extremely small percent of these volcanic features it is impossible to imagine that the calculation is correct.

Re: Carbon storage - lending the forests a hand
#2