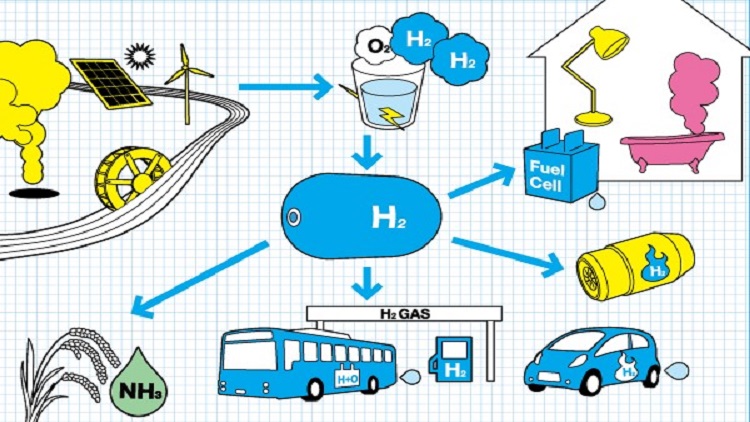 Illustration of the flow from production, storage and application of renewable hydrogen. Source: CC BY-SA 3.0

The world has witnessed a meteoric rise in the adoption of clean energy resources, replacing non-renewable fossil fuels. Still, these emerging systems have a slew of pitfalls, including long distances between power plants from the point of consumption and posing energy transmission challenges. Due to the unreliable and fluctuating existence of renewable energy sources, electricity supply is uncertain, and there will often be a discrepancy between clean energy production and power demand. Thus, with current centralized electricity generation and distribution systems, increasing the number of decentralized renewable energy generation plants, such as photovoltaic arrays and wind turbines, will directly impact grid reliability. As a consequence, load curtailment is commonly required to address those issues, but it is costly and inhibits future growth of clean energy.

Energy storage is indeed a potential solution to the above-mentioned issues. Among the different energy storage mechanisms available, including batteries, compressed air, pumped hydro, capacitors and flywheels, hydrogen is a potential candidate to assist in the development of our future energy grid. The basic theory behind this idea is a modern power distribution mechanism based on hydrogen. This method encompasses the processing, storage, transportation, delivery and use of hydrogen. The gas itself can be derived thermally, electrolytically or photolytically from a variety of different fuel sources, including water, natural gas, coal, biomass, boron hydrides and hydrogen sulfide.

Hydrogen is produced by three popular industrial processes: gasification, partial oxidation and reforming. Hydrocarbons combine with water, oxygen or an oxygen/water series to form the gas. In simple terms, the distinction between gasification and reforming is the essence of the arriving fuel. Gasification is the process of converting a solid fuel, including solid waste, biomass or coal, into synthesis gas (hydrogen and carbon monoxide mixture) or hydrogen gas, while reforming is the process of converting a fluid fuel, whether as a gas or a liquid, into synthesis gas.

Another method of generating hydrogen is the decomposition process of thermo-catalytic cracking, which applies thermal energy to hydrocarbons. Thermal cracking can be carried out in an oxidative or nonoxidative manner using catalysts. Likewise, hydrogen can also be produced by thermolysis, based on a single-step to directly split water molecules. Thermo-chemical water splitting, a variation of this method, involves merging the process without the use of a catalyst and lowering the required temperature to 900° C. This route entails a sequence of reaction cycles where all chemicals used, except water, are recycled. Hydrogen and oxygen are synthesized independently in this process.

Hydrogen can be derived from a variety of renewable biomass using the thermo-chemical processes described above, such as reforming and gasification. Biological processes such as anaerobic digestion, in which bacteria are fermented under darkness in bioreactors, or photofermentation, in which algae and bacteria are grown in photobioreactors under light, also yield hydrogen. These options are regarded as promising methods for producing hydrogen with high efficiency and low emissions.

Hydrogen for the gas grid

Hydrogen energy storage systems are being advanced as a potential energy storage candidate for power grids with high penetration rates of renewable energy resources. In that context, power-to-gas concept has emerged as shown in the figure below. Low cost extra renewable power is fed to electrolyzers to generate hydrogen and feed it into the gas grid. There are two primary modes of transportation: direct injection and methanation. The easiest method is to directly pump hydrogen into the natural gas system, delivering the benefits of a one-step operation, no extra cost or energy loss, and no need for extra hydrogen storage. Evidence also indicates that direct injection of large amounts of hydrogen may have an effect on the transportation and thermo-dynamic properties of natural gas, and also on the natural gas pipeline and its applications such as gas burners and turbines. Nonetheless, researchers have shown that direct injection leads to a major decrease in wind power curtailment and maintenance expenses of the hybrid gas and electricity grid network. In the other processes, hydrogen can combine with carbon dioxide to produce additional useful materials. For example, in methanation, hydrogen combines with carbon dioxide or carbon monoxide using a metal catalyst to generate methane that can be directly fed into the gas distribution system without any restrictions. However, due to the need for the extra stage in the power-to-gas network, additional expenditure in methanation plants and hydrogen storage is needed, which results in additional energy and reliability losses.

Hydrogen energy storage systems are a solution to problems associated with power grids integrated with renewable energy resources. The uncertainty of renewable energy sources such as wind and solar, along with the difficulty of forecasting, has a major influence on the electrical grid, creating power quality issues, voltage dips, power surges and shortages, and low power factors. With hydrogen energy storage systems, renewable power can be temporarily stored and then fed back to the power grid during times of low generation.

By posting a comment you confirm that you have read and accept our Posting Rules and Terms of Use.
Re: Hydrogen energy storage systems
#1

Methanation is a fairly well-known method of converting CO2 or CO into methane, using H2, with water as the byproduct. If this methane is then burned, you have a circular process with no net creation or removal of CO2 from the atmosphere. The difficulty will be in sourcing the CO2 for the process.

I like the overall idea of hydrogen as a storage material for excess electricity produced from solar or wind sources. Problems encountered with it will include embrittlement of the steel pipelines, leakage due to its very small molecular size, very broad explosive limits, flame visibility, and conversion of existing burners. However, another application (which has been studied or explored for at least 35 years) is using hydrogen as the fuel source for transportation. I have heard that this is actively being introduced in California, with at least one manufacturer of cars powered by hydrogen and installation of refueling locations and the related infrastructure.

Re: Hydrogen energy storage systems
#2
In reply to #1
WoodwardDL

Three autos that use hydrogen with fuel cells are in service in California. They are made by Toyota, Honda, and Hyundai. They are also in use in Japan and Germany.