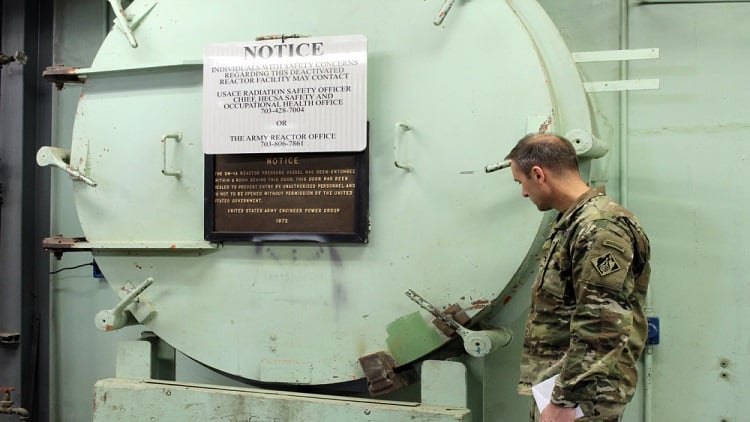 The U.S. Army Corps of Engineers (USACE) has finalized a strategy to preserve the history of a mothballed nuclear reactor at Fort Greely, Alaska. Final decommissioning of the 20.2 MW (thermal) SM-1A pressurized water reactor, which operated from 1962 to 1972, is due to begin next year.

Based on a prototype for stationary medium-power plants, the reactor was designed as a test facility for this type of equipment in an arctic environment. While its primary mission was to supply electrical power and heating steam for utility systems at Fort Greely, it was also used to study the economics of operating a nuclear plant compared to conventional oil-fired systems in a remote area where fuel costs are high and supply lines unusually long.

Construction with highly enriched uranium oxide fuel clad in stainless steel began in 1958, and first criticality was achieved in March 1962. Final shutdown in 1972 entailed preparation of the reactor for safe storage, removal of nuclear fuel, minor decontamination, shipment of pre-packaged radioactive waste, encasing some reactor components in concrete and grout, sealing the pressure vessel and installing warning signs and monitoring devices. Some areas were maintained as restricted areas for radiation safety considerations.

Final decommissioning and dismantlement of SM-1A will soon be initiated so the site can be released for unrestricted use. USACE has also signed a memorandum of agreement with the Alaska State Historic Preservation Office and the city of Delta Junction, delineating how the history of SM-1A and its arctic mission will be preserved. This will include documenting the dismantling of the facility through video and digital photography, as well as recording interviews with former operators, employees and other personnel associated with the construction, operation and initial closure of SM-1A.