Carbon sequestration may be safer in old oil fields

Underground carbon sequestration has been used in the oil and gas industry to mitigate climate change, but it is not without risks, including triggering earthquakes. Now, a new study by Stanford University geophysicists No’am Dvory and Mark Zoback demonstrates that injecting fluids is less likely to trigger earthquakes today in certain conditions.

Injecting wastewater or other fluids into the rocks underground increases pressure, which puts the rocks and any present faults under higher stress. Earthquakes can occur when the pressure and stress get high enough.

The researchers focused on the Delaware Basin, an oil- and gas-producing field in West Texas and New Mexico with more than 10,000 active wells. Drilling has occurred there since the 1970s or earlier. Dvory and Zoback noticed that shallow earthquakes were mostly occurring in the southern half of the basin, even though wastewater injection happened throughout the basin. 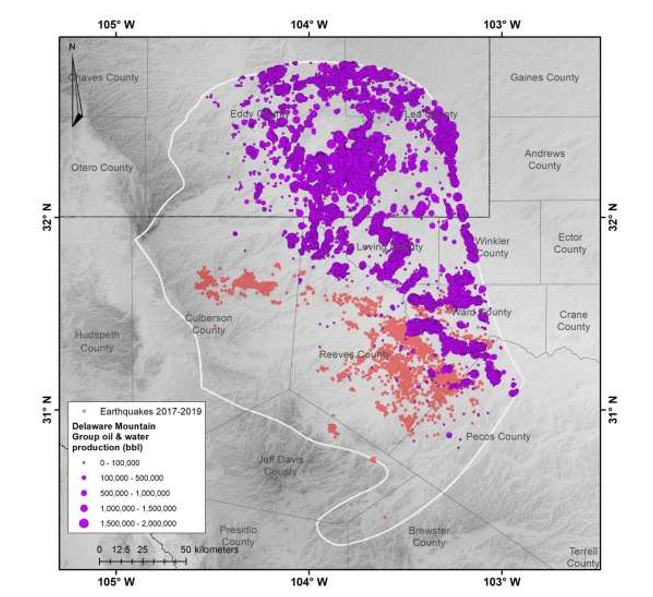 Earthquakes in the southern Delaware Basin (red dots) occur where there has been no historical production from the Delaware Mountain Group (purple circles, the size of the circle indicates the volume of oil and water produced). Source: Dvory et al.

"The compelling question, then, is why are all the shallow earthquakes limited to one area and not more widespread?" Zoback said.

The injection-induced earthquakes in the southern Delaware basin are typically shallow and lower magnitude — not strong enough to cause damage, but enough to cause dishes to rattle. One such earthquake, a 4.6 most likely caused by deep injection that reached the faults in the crystalline basement rock five miles underground, shook Mentone, Texas. The odd pattern of earthquakes made the area a great place to learn about how to minimize the earthquake risk of subsurface operations.

"The size of an earthquake is limited by the size of the fault that slips," Dvory explained. Quake magnitudes tend to be small where faults are shallow and only a few kilometers in size. "You can still feel it, but it's less dangerous."

The scientists modeled the underground pressures needed to cause faults in the basin to slip and connected those values to the estimated stress values. After establishing a baseline, they calculated the pore pressures throughout the basin and observed that in the north, an area where hydrocarbons had been produced previously, there were lower pore pressures and no earthquakes. Conversely, the south, where no previous production took place and the rock was “unperturbed,” had higher initial pressures and experienced earthquakes.

"In some areas we have evidence of oil and gas development from even the1950s," Dvory says. "Where there was significant hydrocarbon production, pressure was depleted, and the formations essentially became more stable."

With lower earthquake risk, areas of past oil production could be good locations for carbon sequestration, the study found.

"We have a global challenge to store enormous volumes of carbon dioxide in the subsurface in the next ten to twenty years," Zoback says. "We need places to safely store massive volumes of carbon dioxide for hundreds of years, which obviously includes not allowing pressure increases to trigger earthquakes. The importance of geoscience in meeting this challenge can't be overstated. It's an enormous problem, but geoscience is the critical place to start."

The study is published in the journal Geology.

Re: Carbon sequestration may be safer in old oil fields
#1

"We need places to safely store massive volumes of carbon dioxide for hundreds of years, . . . "