The European Association of Automobile Manufacturers (ACEA) has published an interactive map showing the number of truck-specific hydrogen refueling stations required in Europe by 2025 and 2030 for each country.

The first hydrogen fuel‐cell electric vehicles are now being rolled out in Europe. At least 60,000 trucks are 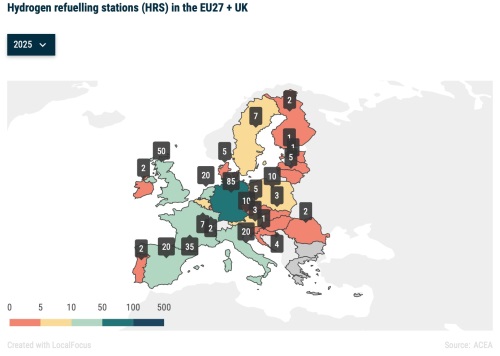 Source: ACEAexpected to be in operation by 2030, and these cannot use existing refueling infrastructure for cars.

The ACEA maintains that a European Union-wide goal of about 300 truck‐suitable hydrogen refueling stations by 2025, and at least 1,000 by 2030, should be adopted. One hydrogen refueling site should be available every 200 km along the TEN‐T core network by 2030. Refueling stations designated for trucks are recommended to offer a daily capacity of at least six tons of hydrogen with a minimum of two dispensers per station.

Infrastructure is also lacking for electric truck recharging. The ACEA advocates a target of 10,00 to 15,000 higher‐power public and destination charging points no later than 2025, and 40,000 to 50,000 charging points no later than 2030. A target of at least 40,000 lower power (100 kW) public overnight chargers at truck parking areas along the highways should be set for 2030.

By posting a comment you confirm that you have read and accept our Posting Rules and Terms of Use.
Advertisement
RELATED ARTICLES
Video: Hydrogen race truck designed to deliver at Dakar 2022
Video: New hydrogen storage tech to be piloted in UK
Shell Opens EV Recharging Stations for UK Drivers
Hydrogen is powering transportation everywhere
Toyota and Hino to develop heavy-duty fuel cell truck
Advertisement