Overhaul planned for B-52 wheels and brakes

As the U.S. Air Force extends the operational service life of the B-52 Stratofortress into the 2050s, it has selected Collins Aerospace to design and develop a new wheel and carbon brake for the platform, leading to fleet retrofit of 77 aircraft.

Collins will design the new wheel and carbon brake for the B-52H using the company’s proprietary DURACARB carbon heat sink material. With its increased wear life, DURACARB will allow the Stratofortress to conduct more landings per overhaul, helping to reduce maintenance time and cost while increasing aircraft availability. The ability of the material to handle higher thermal energy loads during braking will also increase the safety margin when stopping heavily loaded B-52s. 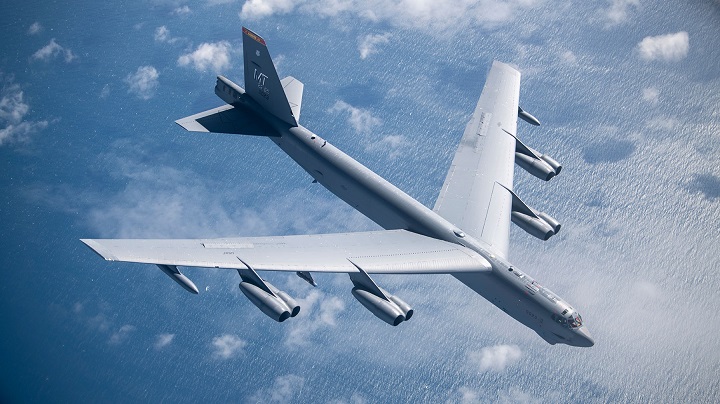 Collins is a leading provider of wheels and brakes for military platforms as the supplier for the U.S. Air Force's F-15, F-16, C-5, C-130 and Global Hawk fleets. The company has also completed wheel and brake upgrades for several air forces around the world, and provides wheels and brakes for more than half of all active C-130s worldwide.

Collins now supplies numerous systems for the B-52, including generators, communication and navigation systems, environmental control systems, engine systems and sensors. The company is actively working with the U.S. Air Force and the plane’s manufacturer to explore how it can support further B-52 modernization efforts, including communications and avionics upgrades.

Re: Overhaul planned for B-52 wheels and brakes
#1

Re: Overhaul planned for B-52 wheels and brakes
#2
In reply to #1
rashavarek

A testimony to slide rule engineering.

Re: Overhaul planned for B-52 wheels and brakes
#3
In reply to #2
PAPADOC

Up, over and back down. (Multiplying with the slide rule)

Re: Overhaul planned for B-52 wheels and brakes
#4
In reply to #3
rashavarek

Yep. still have mine. Actually remember how to use it which kinda freaks me out.

Re: Overhaul planned for B-52 wheels and brakes
#5
In reply to #4
PAPADOC

I was so happy when the hand held calculators came out. No more worrying about the decimal point. However, I was working for a petrochemical design and build construction company. The piping draftsmen made more money than the structural engineers. They all bought them but didn't know how to use them. Sometimes, our economic system isn't fair. The foreign engineers diluted the need for engineers. The foreign engineers came here to learn engineering and then, go back to their country to help their country. They didn't go back. They stayed here. Working for less than a piping draftsman was ok with them. It beat the hell out of what they would get in their country. Supply and demand is a natural law. When there's plenty of supply, the costs go down. And the government allowed them to stay and keep American engineers pay low. That's still a sore spot with me.

Re: Overhaul planned for B-52 wheels and brakes
#6
In reply to #5
rashavarek

But look how many millionaires we created in the process. Doesn't that make you proud to have sacrificed so much so they can have it all and not appreciate it or you?

As long as America worships wealth and holds the stupid idea that rich people are better people because they are rich, (a very common belief among dirt primitive peoples) we will continue our headlong drive to slavery again. After alll it is the most profitable form of business when you consider your workers as expendable and easily and cheaply replaced.

I have long said I will never be rich because I am morally and ethically incapable of treating people the way the rich do.

Re: Overhaul planned for B-52 wheels and brakes
#7
In reply to #6
PAPADOC

If we would replace the American Dream of being a multimillionaire to just being a good citizen with the good things of life-home, auto, education, entertainment, the pleasures and security of a middle class American. That would help a lot. If one does become a multimillionaire by his own wit and brawn, more power to him. And when he passes, his heirs are taxed at the same rate as the ones that worked for their money. They would still have plenty left. This would knock down some of the perpetual de facto royalty in this country. If one works or inherits their income, they should pay taxes at the same rates. It will someday come to past because the world is headed that way.