In-wheel motors are nothing new. The earliest U.S. patent dates back to 1884 and detailed an in-wheel electric motor for locomotives. The concept was further developed by Ferdinand Porsche in 1900 when he introduced a wheel hub motor for an electric car dubbed the Lohner Porsche. More recently, several companies have reinvigorated in-wheel motors, looking to use them on the roads once again.

As the name suggests, in-wheel motors are electrically-powered motors designed to fit within a vehicle’s wheel. The motors are powerful despite their relatively small size and are considered to be highly efficient. Over the past decade companies such as Schaeffler, Siemens VDO (now a part of Continental AG) and Protean Electric have developed various versions of in-wheel motors, along with concept cars to showcase the technology.

In-wheel motors can be integrated into two or all of the wheels on a vehicle and could potentially use up to 96% of generated energy. That compares with a roughly 85% efficiency for hybrids and as low as a 50% efficiency for internal combustion engines. The higher efficiency is due to the motors being located where the power is needed most so there are fewer power transmission losses involved. 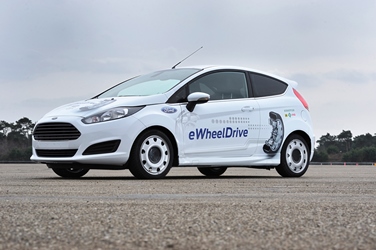 Ford and Schaeffler AG teamed on this concept car. Source: Schaeffler AGHowever, some inefficiencies remain due to the fact that electric motors are most efficient at high speeds. At automotive speeds, wheels turn relatively slowly, so manufacturers have experimented with integrated planetary gear drivetrains to keep the motors running at high speeds. In this configuration, the wheels are geared down to a slower speed. Versions with these additional planetary gear drivetrains introduce transmission losses and thus decrease drive system efficiency. Others have fine-tuned the motor in other ways to be efficient at slower speeds.

In-wheel motors use permanent magnets that rely on rare earth materials such as lanthanum, neodymium, dysprosium or terbium to make lighter and smaller high-efficiency motors. Rare earth materials are expensive because of their relative scarcity. China is the largest producer—it controls around 97% of the current global supply—but since Chinese manufacturers are looking to use this supply for their own use, export quantities are low and prices are high. Because of this, motor manufacturers are focusing efforts on reducing the amount of raw earth material content in their magnets and less on advancing other motor technologies.

In-wheel motors also gain efficiency by using regenerative braking to slow the wheels. Additional power is generated as a result of this action. When the vehicle's driver engages the brake, an electronic control system switches the wheel motors from drive motors to power generators. This points to an additional advantage of in-wheel motors over centrally-powered electric vehicle drive systems: with independent regenerative braking, each wheel acts in a similar way as ABS friction brakes by allowing more control to be maintained at each wheel.

Outside of energy efficiency and safety, other design and manufacturing advantages exist for pursuing in-wheel motor technologies. In theory, in-wheel motors allow for the same motor design and assembly to be used across multiple vehicle platforms. By developing a universal wheel design, similar designs could be used across many vehicle platforms.

And because in-wheel motors integrate multiple components such as the drivetrain, steering, shock absorbers and brakes directly into the wheel assembly, they simplify the design process by providing additional work space in other areas of the vehicle. This potentially could eliminate components that need to be custom designed for each model, would allow for better parts interchangeability and might offer still greater design and production efficiencies. Manufacturers could then use their proprietary powertrain management systems to differentiate performance for each application. They even could go a step further and allow owners to differentiate performance by driver skill level.

To address this concern, Protean Electric, a U.S.-based in-wheel technology company, commissioned a study on the effect of shifting unsprung mass. The study included test vehicles and theoretical studies and concluded that there were perceptible performance differences with increased unsprung weight. It found, however, that these differences would be indistinguishable to the average driver and could be easily overcome by common engineering processes during development.

Two manufacturers that appear to be leading the development of in-wheel motors are Protean, with its Protean Drive design, and Schaeffler, with its eWheelDrive design. Siemens VDO also investigated in-wheel motor applications with its eCorner module concept. This design had strong initial development and was integrated into several concept cars.

Protean Electric is targeting its in-wheel electric drive system for electric light-duty vehicles. Its motors have a total mass of 68 lbs. and are low-speed, high-torque, direct-drive motors capable of up to 100 hp and 735 lb.-ft. of torque at each wheel. They operate at a voltage range of between 200-400Vdc. To maximize torque, the coils and magnets are mounted with the largest possible diameter, making the outside diameter of the motor 16.5 in. with a 4.5 in. width.

Protean Electric is targeting both passenger and light commercial applications with this wheel. The motors are capable of being the sole power source for an electric vehicle, but they also can be paired with conventional internal combustion powertrains to improve their efficiency. Protean is developing the wheel for use in a variety of hybrid and electric vehicles, but it also sees an opportunity to retrofit existing vehicles. Since 2007, the company has retrofitted six demonstration vehicles, including an all-electric 4WD Ford F-150 and a hybrid Mercedes-Benz E-Class.

Schaeffler is a leading German-based automotive component manufacturer. Its eWheelDrive motors have a total mass of 117 lbs. and are liquid-cooled, direct-drive motors capable of outputting up to 110 hp and 516 lb.-ft. of torque at each wheel. They operate at a voltage range of between 360–420Vdc.

As with the Protean Drive, torque is maximized as a result of the coils and magnets being mounted with as large a diameter as possible to fit within a 16-inch wheel rim. The eWheelDrive system also has a steering system that enables vehicles to move sideways into parking spaces, providing enhanced maneuverability, especially in urban environments. Schaeffler partnered with Ford Motor Co. to build a prototype based on a Ford Fiesta. The manufacturers are working again on a project called MEHREN (Multimotor Electric Vehicle with Highest Room and Energy Efficiency) to develop two new vehicles by 2015.

In-wheel motor technology has made great advancements over the past 134 years and consumers can look forward to seeing production-ready products. Perhaps the primary lingering concern is that in-wheel motors won’t be an acceptable drive technology until the designs are extensively road tested and subjected to harsh undercarriage environments, a process that is fraught with unpredictable outcomes.