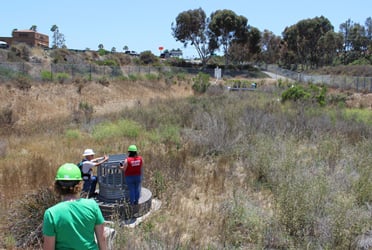 Students and workers inspect a biofilter in Irvine, Calif. Image source: James Beam / UCI Examples of the technology are green roofs that absorb and evapotranspire rainfall; rainwater tanks attached to homes and other buildings; and permeable pavement for roads, driveways and parking lots.

These strategies were suggested by an international group of experts who recently collaborated on a review article in the American Chemical Society journal Environmental Science & Technology.

Managing stormwater runoff in urban environments is a challenge for engineers and water officials. During pre-industrial times, rainwater gradually seeped into the ground and, from there, into rivers, lakes and oceans. However, humans have replaced forests and grasslands with a lot of impermeable surfaces that send runoff in a torrent directly to the closest waterways.

"The volumes and pollutants associated with stormwater runoff are a one-two punch for streams and lead to a condition known as 'urban stream syndrome,'" says Asal Askarizadeh, lead author and UCI graduate student in civil & environmental engineering.

Symptoms include erosion, flooding and rising stream temperatures; an imbalance in nutrients, carbon and oxygen in the water; and an increase in unwanted sediments, chemical pollutants and human pathogens.

One possible answer, Askarizadeh says, is to harvest and reuse as much of the stormwater runoff as possible and allow a portion to infiltrate into the ground to support streams and groundwater.

"Using LIDs to create this kind of localized, widely distributed approach to stormwater management will require individuals and public agencies to be open to significant change," says co-author David Feldman, professor and chair of UCI's Department of Planning, Policy & Design. "We expect the government to manage our water supply completely, and in some places, it's even illegal to harvest rainwater locally. Laws and habits are going to have to change if we are to adapt to new climate and urban realities."

One change that the authors argue for is a movement toward distributed infrastructure (rainwater tanks and green roofs). These distributed systems could complement the centralized infrastructure (aqueducts, water treatment plants and, more recently, desalination plants) that cities rely on.

"The reason is that in order to protect receiving waters and streams, we need to capture the runoff as close to where it's generated—for example, your home—as possible," says co-author Brett Sanders, professor and chair of the Department of Civil & Environmental Engineering at UCI.

"The question then becomes: What do you do with the stormwater once you've captured it?" says co-author Megan Rippy, a UCI postdoctoral researcher in civil & environmental engineering. "Our work provides a blueprint for estimating how much of the captured water should be infiltrated into the ground and how much should be harvested for any purpose that keeps it out of the stream, such as for non-potable purposes in the home. The ratio of those two volumes depends on local climate and what the landscape looked like in pre-industrial times."

"The bottom line is that these solutions are good for the environment and good for people too; they just require changing habits," Grant says. "For example, over 2 million people in Australia use rainwater from their roofs to flush toilets."

With funding from a National Science Foundation PIRE grant, he and his colleagues were able to spend time in southeastern Australia studying how people there have dealt with their historic drought.

"They have had a positive experience implementing LID technologies to manage scarce water resources, and in doing so, they've provided a good example of how universities can work with governments and private-sector entities to come up with solutions to water challenges," Grant says.

By posting a comment you confirm that you have read and accept our Posting Rules and Terms of Use.
Advertisement
RELATED ARTICLES
How (and why) to harvest stormwater
Rainfall Collection Could Lower Potable Water Use by 25%
Evaluation Process for Green Roofs Developed Using Earthquake Engineering Math Technique
New Purification Method Uses Sand to Clean Chemical-ridden Stormwater
Video: Plan stormwater infrastructure projects with this CLASIC tool
Advertisement