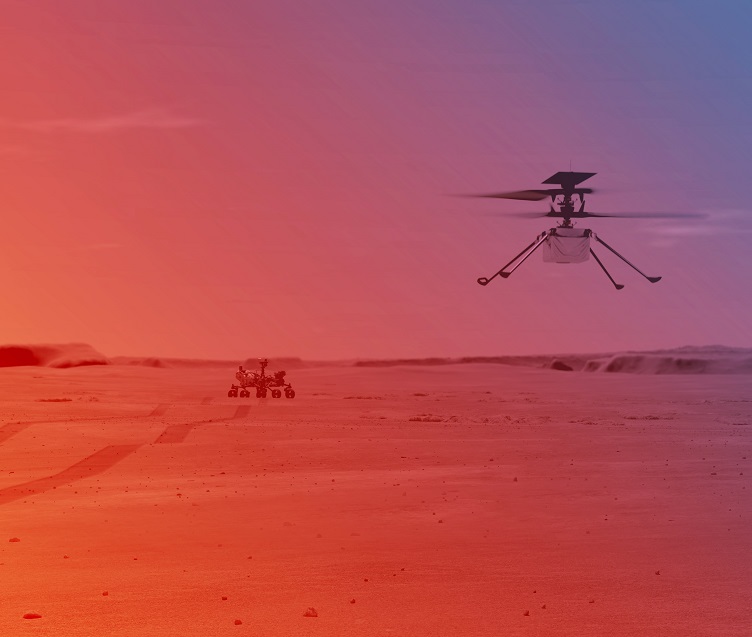 An artist illustration of the flight of the Ingenuity Mars helicopter. Source: NASA

NASA plans to make its first attempt to fly the Ingenuity Mars Helicopter no earlier than April 8, making it the first controlled flight of an aircraft on another planet.

Currently, the 4 lb rotorcraft remains attached to the belly of NASA’s Perseverance rover, which touched down on Mars on Feb. 18. Earlier this week, the rover deployed the guitar case-shaped graphite composite debris shield that protected Ingenuity during landing.

Perseverance is in transit on Mars to a flat area where it will attempt to fly. When deployed, Ingenuity will have 30 Martian days to conduct its test flight.

“When NASA’s Sojourner rover landed on Mars in 1997, it proved that roving the Red Planet was possible and completely redefined our approach to how we explore Mars,” said Lori Glaze, director of the Planetary Science Division at NASA Headquarters. “Similarly, we want to learn about the potential Ingenuity has for the future of science research. Aptly named, Ingenuity is a technology demonstration that aims to be the first powered flight on another world and, if successful, could further expand our horizons and broaden the scope of what is possible with Mars exploration.”

NASA said flying on Mars is harder than on Earth because the Red Planet has significant gravity but its atmosphere is just 1% as dense as Earth’s at the surface. During the day, the surface receives only about half the amount of solar energy that reaches Earth during the day and nighttime can drop to as low as -90° C.

The Ingenuity drone helicopter must be small and lightweight to make the trip to Mars but able to withstand the harsh conditions of the cold Martian nights as well as have enough energy to power internal heaters.

“Every step we have taken since this journey began six years ago has been uncharted territory in the history of aircraft,” said Bob Balaram, Mars Helicopter chief engineer at JPL. “And while getting deployed to the surface will be a big challenge, surviving that first night on Mars alone, without the rover protecting it and keeping it powered, will be an even bigger one.”

Perseverance is moving to an “airfield” that measures 33 ft x 33 ft, which was chosen for its flatness and lack of obstructions. Once the helicopter and rover confirm that the rover is in the spot NASA wants, the process to deploy the helicopter on the surface begins.

“As with everything with the helicopter, this type of deployment has never been done before,” said Farah Alibay, Mars Helicopter integration lead for the Perseverance rover. “Once we start the deployment there is no turning back. All activities are closely coordinated, irreversible, and dependent on each other. If there is even a hint that something isn’t going as expected, we may decide to hold off for a sol or more until we have a better idea what is going on.”

Deployment will take about six days with the team on Earth activating a bolt-breaking device that releases a locking mechanism to hold the helicopter in place during launch and landing. Next, a cable-cutting pyrotechnic device will be used and a mechanized arm that holds Ingenuity will begin rotating the helicopter out of its horizonal position, allowing the drone to extend two of its four landing legs.

On the third day of deployment, a small electric motor will finish rotating Ingenuity, bringing the helicopter vertical, and on the fourth day the final two landing legs will snap into position. On the fifth day, the team will utilize Perseverance as a power source and charge Ingenuity’s six battery cells.

“Once we cut the cord with Perseverance and drop those final five inches to the surface, we want to have our big friend drive away as quickly as possible so we can get the Sun’s rays on our solar panel and begin recharging our batteries,” Balaram said.

On the final day, the team will confirm that all four legs are on the Martian surface, that the rover did drive about 16 ft away and both the helicopter and rover are communicating via the onboard radios. If the helicopter survives the first night of the sequence period on the surface of Mars, the team will spend the next several days prepping for a successful flight including wiggling the rotor blades and verifying performance of the inertial measurement unit on-board.

Once cleared for flight, Ingenuity will climb at a rate of about 3 ft per second, hover at 10 ft above the surface for up to 30 seconds, then descend and touch back down on the surface. Several hours after the first flight, data, images and video will be uploaded to NASA verifying that the flight was a success.

By posting a comment you confirm that you have read and accept our Posting Rules and Terms of Use.
Re: NASA preps for first Martian drone helicopter flight
#1

Will NASA be posting photos and/or video that this drone will be taking? If so, where?