The injection of lithium pellets injected into the divertor would liquify and radiate strongly, diffusing much 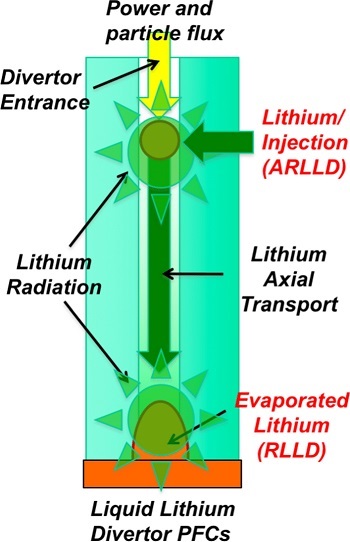 A liquid lithium injection system is proposed to prevent extreme heat from damaging divertor components in tokamaks. Source: M. Ono et al./PPLof the extreme heat escaping from the core of the plasma and minimizing the amount striking the divertor wall. Lithium is currently injected into tokamaks with simple, gas gun injectors that tend to inject a load of gas into the vacuum chamber housing the core plasma, which could cause problems. The gas guns could be replaced with newly engineered high-speed electromagnetic particle injectors designed to remain in stand-by mode until needed and inject a radiative payload on a fast timescale.

Extreme heat flux is signaled by sudden flashes of light that heat bursts produce at the edge of the plasma. Such bursts could reach the divertor in about 10 milliseconds, but the electromagnetic particle injector would rapidly fire a high-speed projectile into the divertor region to radiate away the onrushing heat flux.

The researchers plan to test the lithium injection system at the National Spherical Torus Experiment-Upgrade fusion facility at PPPL.

A paper on this study is published in the Journal of Fusion Energy.

By posting a comment you confirm that you have read and accept our Posting Rules and Terms of Use.
Advertisement
RELATED ARTICLES
China's EAST Reactor Sets Another Plasma Record
Long-range plan for fostering US fusion energy
MIT Announces a Working, Pilot Commercial Nuclear Fusion Reactor is 15 Years Away
Video: Commercial fusion turns up the heat
Watch how a divertor takes the heat off tokamak technology
Advertisement