The barriers blocking rivers in Europe were inventoried

River fragmentation throughout Europe is more prevalent than previously thought, raising concerns for biodiversity and the provision of ecosystem services. More than 1.2 million barriers, from large-scale dams to locks to weirs, stretch across rivers on the continent, more than twice as many as previously thought, according to an international research project.

To conduct a detailed survey of rivers in 36 European countries, scientists first examined more than 120 databases of river infrastructure throughout 1.65 million km of rivers in Europe. Realizing that structures less than two meters in height were not included in the datasets, the researchers took an extended field trip and 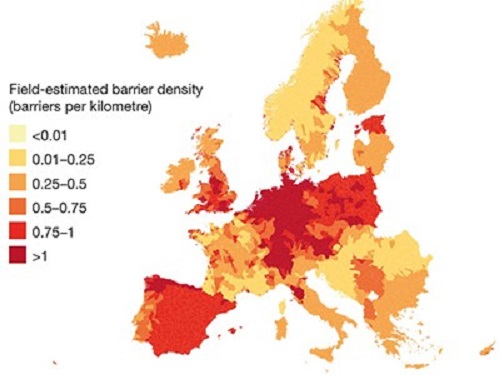 The rivers were observed to average one barrier every 0.6 km, with densities ranging from five barriers per 1,000 km in Montenegro to almost 20 barriers per kilometer in the Netherlands, making Europe’s waterways possibly the most fragmented river network in the world. Large-scale projects, classified as 15 m or higher, account for less than 1% of the barriers on European rivers. More than 90% of blockages are under 5 m tall.

Barriers of all sizes disrupt the transport and delivery of sediments and nutrients, as well as the migration and dispersal of aquatic organisms. The study could inform the implementation of the EU Biodiversity Strategy formulated to reconnect 25,000 km of Europe’s rivers by 2030.

By posting a comment you confirm that you have read and accept our Posting Rules and Terms of Use.
Advertisement
RELATED ARTICLES
Researchers Discover that Flash Floods Carry Significiant Amount of Microplastics from Rivers to the Sea
Boom in Hydropower Could Endanger Freshwater Biodiversity
Study: Ocean clean up technology is not the solution to stopping plastic pollution
Study: Plastics Found in Freshwater Insects
Concentrations of 29 Different Pharmaceuticals Found in York Rivers
Advertisement