NASA readies system to send samples back from Mars 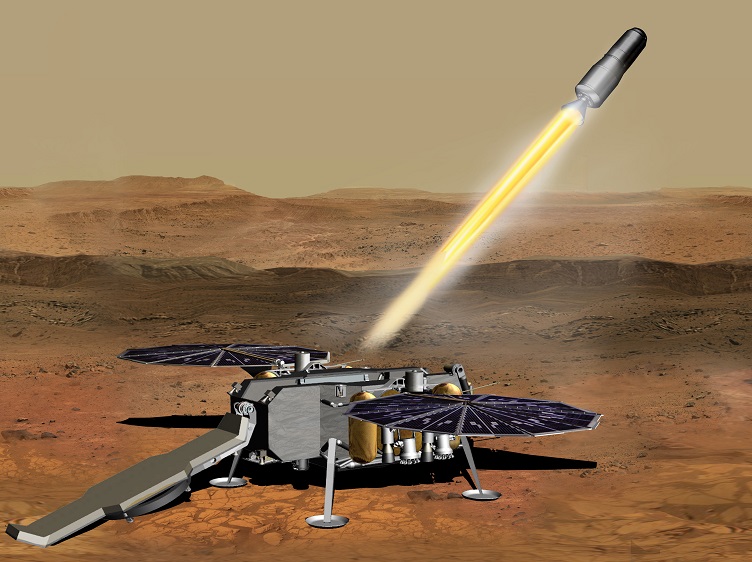 An artist's rendering of how the Mars Sample Return system might work on the Red Planet, which is just one step to returning soil samples back to Earth. Source: NASA

NASA has completed a review of its Mars Sample Return (MSR) campaign that would create a system to send samples from Mars back to Earth for scientific study.

The review of the system concluded that NASA is prepared for the campaign and with an international partnership with the European Space Agency (ESA) will be able to return the first samples from another planet.

The MSR campaign will require three space vehicles to accomplish the task of sending samples from Mars back to Earth. The first vehicle is the Mars 2020 Perseverance rover, which is halfway to Mars following a launch in July. The Perseverance contains a sampling system with a coring drill and sample tubes. Once on Mars, the Perseverance rover will cache rock and regolith samples in its collection tubes. It will then leave some of them on the Martian surface for an ESA rover to collect and deliver to a NASA-provided Mars Ascent Vehicle.

This spacecraft would then launch the samples into orbit around Mars. An ESA Earth Return Orbiter would then rendezvous with the Ascent Vehicle in orbit around Mars and return them in a secure containment capsule bound for Earth. The entire program should take place beginning in the 2030s, NASA said.

“The MSR campaign is a highly ambitious, technically demanding, and multi-faceted planetary exploration program with extraordinary scientific potential for world-changing discoveries,” said Thomas Zurbuchen, associate administrator for NASA. “Ultimately, I believe this sample return will be well worth the effort and help us answer key astrobiology questions about the Red Planet — bringing us one step closer to our eventual goal of sending humans to Mars.”

The MSR Independent Review Board (IRB) found that NASA had developed a feasible concept and a broad set of architectural options to inform the planning for the MSR campaign over the next several years. The board acknowledged the cooperation between NASA and ESA in robotic and human space exploration as an asset for the campaign.

Re: NASA readies system to send samples back from Mars
#1

`
In the meantime...
/Patiently waiting for America’s manned space program to escape the 1960s.