The Mayflower departed England on September 16, 1620, carrying 102 passengers and a crew of about 30 across the Atlantic Ocean to the New World. Marking the 400th anniversary of this voyage with technology never dreamed of by the Pilgrims, the Mayflower Autonomous Ship launched from Plymouth, England. During sea trials the solar- and wind-powered trimaran ship will collect oceanographic data in preparation for a trans-Atlantic voyage to Plymouth, Massachusetts, in the spring of 2021. 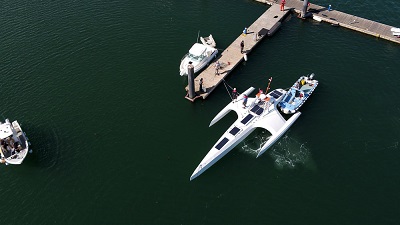 Sea trials will be conducted before the autonomous ship embarks on a trans-Atlantic crossing. Source: IBMlightweight 5 ton vessel of 15 m length and capable of achieving a speed of 20 knots. Instead of a crew, the ship will rely on an artificial intelligence (AI) navigation system developed by ProMare and IBM. The AI Captain system makes use of data from onboard radar, GPS, nautical charts, attitude sensors, a fathometer, a vehicle management system and weather data from The Weather Company.

The solar-powered hybrid electric propulsion system includes dual 20 kW permanent magnet motors and banks of lithium-iron-phosphate batteries. An interactive web portal provides real-time updates about the ship's location, environmental conditions, battery state of charge and data from research projects. The portal includes contributions from a seven-armed, stowaway octopus chatbot called Artie, who claims to be hitching a ride on the ship. Powered by IBM Watson Assistant technology and created in partnership with European start-up Chatbotbay, Artie has been trained to provide information about the Mayflower Autonomous Ship in an accessible format.