The Alpha Dogfight Trials, which were designed to examine the role of automation in air to air combat, concluded on August 20, with the AI algorithm developed by Heron Systems the victor in each of the five simulated dogfight rounds. 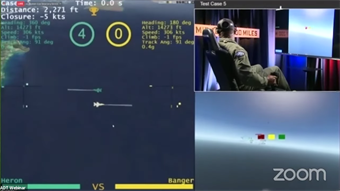 To watch the battle between AI and the human pilot, watch the accompanying video that appears courtesy of DARPA.

By posting a comment you confirm that you have read and accept our Posting Rules and Terms of Use.
Advertisement
RELATED ARTICLES
Sikorsky Gets Green Light for Aircraft Automation Program
DARPA Advances Work to Boost Aircraft Automation
Video: Automated System Co-Pilots a Simulated Boeing 737
Botanical Sentries: Plants as Security Sensors
Watch: DARPA to disarm suspicious drones with pink string?
Advertisement