Scientists have developed a process to treat waste coffee grounds to allow them to store methane. The soak-and-heating process develops a carbon capture material with the benefits of recycling a waste product. The results are published in the journal Nanotechnology.

Methane capture and storage removes a greenhouse gas from the atmosphere that can then be used as a fuel. 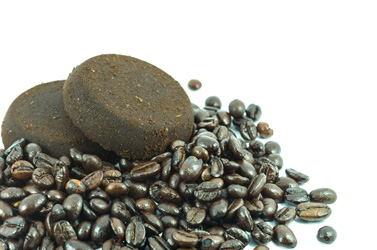 Scientists have developed a process to treat waste coffee grounds to allow them to store methane.

The process developed by the researchers, based at the Ulsan National Institute of Science and Technology (UNIST), South Korea, involves soaking the waste coffee grounds in sodium hydroxide and heating to 700-900° C in a furnace.

"The big thing is we are decreasing the fabrication time and we are using cheap materials," says Christian Kemp, an author of the paper now based at Pohang University of Science and Technology, South Korea. "The waste material is free compared to all the metals and organic chemicals needed in other processes."

The absorbency of coffee grounds may be the key to successful activation of the material for carbon capture. "It seems when we add the sodium hydroxide to form the activated carbon it absorbs everything," says Kemp. "We were able to take away one step in the normal activation process—the filtering and washing—because the coffee is such a brilliant absorbant."

By posting a comment you confirm that you have read and accept our Posting Rules and Terms of Use.
Advertisement
RELATED ARTICLES
How Coffee Grounds Can Beget Biodegradable Plastics
In Coffee News: A 'Green' Coffee Maker and Ink from Coffee Grounds
Watch: Fueling Up on Coffee for London Commuters
Kickstarter campaign launches for hoodie made from coffee grounds, plastic bottles
Spent Coffee Grounds to Fuel Some London Buses
Advertisement