Rice serves as the staple food for more than half of the world's population, but it is also one of the largest manmade sources of atmospheric methane, a greenhouse gas. Now, with the addition of a single gene, rice can be cultivated to emit virtually no methane from its paddies during growth. It also packs much more of the plant's desired properties, such as starch for a richer food source and biomass for energy production, according to a study in Nature. 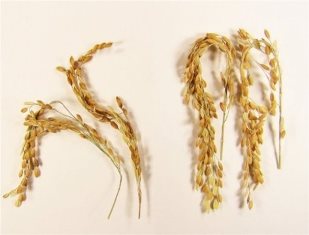 In addition to a near elimination of greenhouse gases associated with its growth, SUSIBA2 rice produces substantially more grains for a richer food source. Source: wikipedia.comWith their warm, waterlogged soils, rice paddies contribute up to 17% of global methane emissions, the equivalent of about 100 million tons each year. While this represents a smaller percentage of overall greenhouse gases than carbon dioxide, methane is about 20 times more effective at trapping heat. SUSIBA2 (SUgar SIgnaling in BArley 2) rice, as the new strain is dubbed, is one of the first high-starch, low-methane rice strains that could offer a significant and sustainable solution.

Researchers created SUSIBA2 rice by introducing a single gene from barley into common rice. This results in a plant that can better feed its grains, stems and leaves while starving off methane-producing microbes in the soil.

The results represent a culmination of more than a decade of work by researchers in three countries, including Christer Jansson, director of plant sciences at the Department of Energy's Pacific Northwest National Laboratory and EMSL, DOE's Environmental Molecular Sciences Laboratory (EMSL). Jansson and colleagues hypothesized the concept while at the Swedish University of Agricultural Sciences and carried out studies at the university and with colleagues at China's Fujian Academy of Agricultural Sciences and Hunan Agricultural University.

"The need to increase starch content and lower methane emissions from rice production is widely recognized, but the ability to do both simultaneously has eluded researchers," he says.

During photosynthesis, carbon dioxide is absorbed and converted to sugars to feed or be stored in various parts of the plant. Researchers have sought to better understand and control this process to coax out desired characteristics of the plant. Funneling more carbon to the seeds in rice results, in a plumper and starchier grain. Similarly, carbon and resulting sugars channeled to stems and leaves increases their mass and creates more plant biomass, a bioenergy feedstock.

In early work in Sweden, Jansson and his team investigated how distribution of sugars in plants could be controlled by a special protein called a transcription factor, which binds to certain genes and turns them on or off.

"By controlling where the transcription factor is produced, we can then dictate where in a plant the carbon—and resulting sugars—accumulate," he says.

To narrow the mass of gene contenders, the team started with grains of barley that were high in starch. They then identified genes within that were highly active. The activity of each gene was analyzed in an attempt to find the specific transcription factor responsible for regulating the conversion of sugar to starch in the above-ground portions of the plant, primarily the grains.

Upon discovery of the transcription factor SUSIBA2, further investigation revealed it was a type known as a master regulator. Master regulators control several genes and processes in metabolic or regulatory pathways. As such, SUSIBA2 has the ability to direct the majority of carbon to the grains and leaves, and essentially cut off the supply to the roots and soil where certain microbes consume and convert it to methane.

Researchers introduced SUSIBA2 into a common variety of rice and tested its performance against a non-modified version of the same strain. Over three years of field studies in China, researchers consistently demonstrated that SUSIBA2 delivered increased crop yields and a near elimination of methane emissions.

Jansson will continue his work with SUSIBA2 this fall to further investigate the mechanisms involved with the allocation of carbon using mass spectrometry and imaging capabilities at EMSL. He and collaborators also want to analyze how roots and microbial communities interact to gain a more holistic understanding on any impacts a decrease in methane-producing bacteria may have.

By posting a comment you confirm that you have read and accept our Posting Rules and Terms of Use.
Advertisement
RELATED ARTICLES
Waste Coffee Used for Methane Storage
Risky Rice
Breakthrough Advancements in Biofuels Research?
Video: NASA paints a 3D portrait of atmospheric methane
Production of ethanol and its effluent treatment
Advertisement