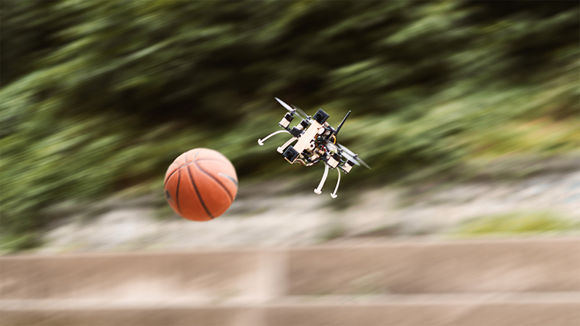 Source: University of ZurichTo improve drone reaction times to other flying objects that may pose a collision hazard, researchers from the University of Zurich in Switzerland have outfitted a drone with algorithms and specialized cameras to detect and avoid such obstacles.

To develop a high-speed drone capable of quickly detecting and avoiding collisions with static objects, birds or other drones, for instance, the research team equipped a quadcopter drone, which is a drone with four propellers, with algorithms and so-called Event Cameras.

The Event Cameras include independent smart pixels, which, unlike traditional camera pixels, stay the same when the pixels do not detect changes. Meanwhile, pixels that detect alterations in light intensity will instantly communicate that information. This means that only a fraction of the pixels of the image require processing via the on-board computer, thereby expediting the drone’s computation.

During testing of the drone, the combination of Event Cameras and algorithms enabled the drone to avoid objects launched in its path 90% of the time. Likewise, the combination of specialized cameras and algorithms enabled the drone to cut its reaction time — which is typically 20 to 40 milliseconds in standard drones — to just a few milliseconds. To demonstrate the improved response time of the drone, the research team filmed the enhanced quadcopter avoiding collision with a ball thrown at it from a short distance.

With its improved response times and collision avoidance capabilities, the University of Zurich team envisions that quadcopters enhanced with the cameras and algorithms could improve search and rescue missions in the aftermath of a disaster. The team also sees use cases for the technology beyond improving drone operations including applications for transportation, mining and conducting remote inspections using robots.

The research appears in Science Robotics.

To see the drone's avoidance capabilities, watch the accompanying video that appears courtesy of the University of Zurich.

By posting a comment you confirm that you have read and accept our Posting Rules and Terms of Use.
Advertisement
RELATED ARTICLES
Watch this drone swarm fly through dense forest
Watch this shape-shifting drone from UC Berkeley
Disney Develops a Graffiti Drone
Researchers Urge Aircraft Engine Hardening to Protect Against Drone Strikes
Rules for Drone Use Drafted by Private-Sector Group in Japan
Advertisement