Researchers from Russia’s Skolkovo Institute of Science and Technology (Skoltech) have developed a way to position a swarm of rescue or research drones.

Wearing a virtual reality (VR) helmet, a pair of gloves with markers and a tactile interface, the user imitates shooting a bow, which guides each drone toward its intended destination. 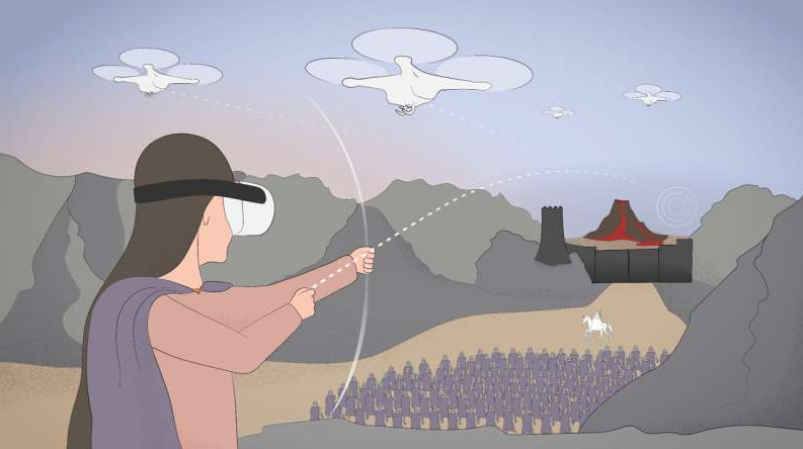 A motion capture system featuring several infrared (IR) cameras surround the so-called "shooter," tracking the locations of the gloves and drones while the tactile interface enables the wearer to feel the tension of the virtual bowstring according to the distance between the gloves. This feedback is then used to modify the distance to the location where the drone will be deployed.

According to the researchers, the wearer uses the VR helmet to visualize in real time the ballistic trajectory of the drones. Once the operator approves of the trajectory, he or she can unclench their fist, which is confirmed by the camera, and the trajectory is locked in, and the drone is deployed to follow that approved trajectory.

As soon as the drone reaches its intended destination, it performs a task such as forest fire detection, a rescue operation, vegetation index-based crop monitoring, infrastructure inspection or maintenance, natural resource management or pollution detection via a conventional form of control guiding the drone on its mission.

"The benefit of using an arrowlike ballistic trajectory is that it feels natural for a person, and that way a human operator can quickly find a way to deploy drones while avoiding obstacles. It's a fairly natural task for humans," the researchers explained. "You could use software to set the coordinates for drones to travel to, but then they would have to figure out the path that avoids the obstacles on their own, and that means each machine must be equipped with a camera."

Further, using VR enables the operator to deploy drones without being anywhere near the drone swarm’s destination. Likewise, the drones have been built to withstand various harsh conditions such as fire, radioactive contamination or freezing temperatures in a remote location.

The team of researchers suggested that the technology could also potentially be used in the video game industry.

For more on the VR bow, watch the accompanying video that appears courtesy of Skolkovo Institute of Science and Technology.

By posting a comment you confirm that you have read and accept our Posting Rules and Terms of Use.
Advertisement
RELATED ARTICLES
Watch this drone swarm fly through dense forest
Oil Spill Mapping by Flocks of Drones
Defense company develops anti-drone laser technology
Single operator controls a swarm of 130 drones
Watch how drones take on rebar tying tasks
Advertisement