Scientists at Zhejiang University in China have enabled a swarm of drones to autonomously fly through dense forest, avoiding obstacles and subsequent collisions.

Unlike drone swarm tests that were previously performed in open environments without obstacles and thus the risk of collision, or those obstacle locations already programmed in, the team of scientists flew the palm-sized drones in an unstructured environment. 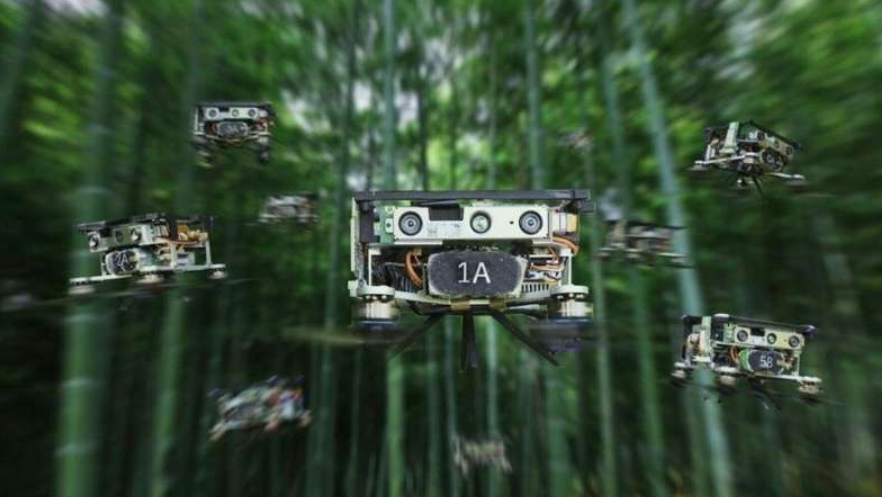 To accomplish this, the drones were outfitted with depth cameras, altitude sensors, onboard computers and algorithms that enable collision avoidance, flight efficiency and coordination within the swarm. Further, the drones do not rely on outside infrastructure such as GPS.

The obstacle-avoiding drone swarms, according to the scientists, can be used to survey damages in the aftermath of natural disasters, assessing unsafe buildings and performing search and rescue functions. Likewise, swarms could potentially be used to collectively lift and deliver heavy objects or employed by the military.

To see the drone swarms tested in a bamboo forest where they avoid obstacles such as trees and other drones, watch the accompanying video that appears courtesy of Zhejiang University.

For more on the drone swarm, read the article Swarm of micro flying robots in the wild, which appears in the journal Science Robotics.

By posting a comment you confirm that you have read and accept our Posting Rules and Terms of Use.
Advertisement
RELATED ARTICLES
Oil Spill Mapping by Flocks of Drones
Defense company develops anti-drone laser technology
Engineers develop 'bug algorithm' for drone swarming capabilities
Team working on AR interface to offer hands-free control of drone swarms
Single operator controls a swarm of 130 drones
Advertisement