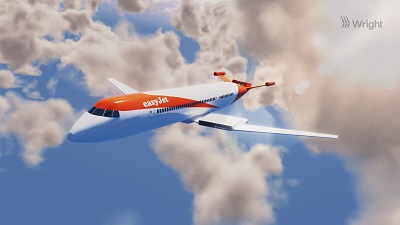 Wright plans to conduct ground tests on the new motor in 2021 before starting flight tests on an adapted aircraft in 2023. It will simultaneously be working on the aircraft’s fuselage to improve its aerodynamics and collaborating with BAE systems in the development of flight controls and energy management systems.

The aircraft will be powered using swappable battery packs, which will sustain it for flights of up to two hours. As well as eliminating emissions, Wright says that the planes will be cheaper to operate and will make less noise than conventional craft.

The U.K.-based airline EasyJet is partnering with Wright on the project and plans to put the plane, called Wright 1, into service by 2030.

By posting a comment you confirm that you have read and accept our Posting Rules and Terms of Use.
Advertisement
RELATED ARTICLES
Aviation-grade motor tested for transport-category zero-emissions aircraft
Flying car hub to launch in 2025 in central Florida
NASA’s Ingenuity helicopter takes flight on Mars
Fuel Cell-powered Plane Takes Flight
NASA’s Hybrid-electric Concept Aircraft Could Slash Jetliner Fuel Use by Ten Percent
Advertisement