Emissions continue to decline at US power plants, says EPA

Emissions of major air pollutants from power plants in the contiguous U.S. declined in 2019 relative to 2018 as 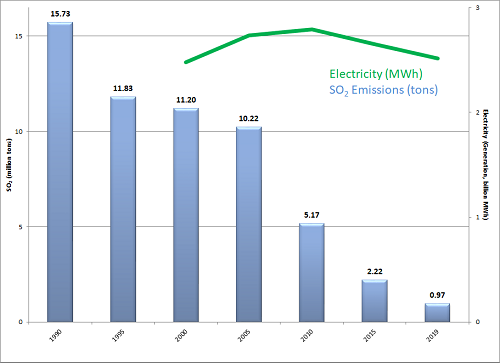 The data also reflect a longer term downward trend in power plant emissions: Annual sulfur dioxide emissions declined by 94% to 0.97 million tons and nitrogen oxide by 86% to 0.88 million tons between 1990 and 2019. Greenhouse gas emissions from power plants dropped by about 20% since 2011.

The graph explores data depicting emissions and heat input from power plants, and compares annual emission data from 2018 with 2019 and longer term data at the facility level.

By posting a comment you confirm that you have read and accept our Posting Rules and Terms of Use.
Advertisement
RELATED ARTICLES
EPA Data Show GHG Emission Declines in the U.S.
EPA Says Greenhouse Gas Emissions Are Down 9% Since 2005
Air emissions will remain flat through mid-century, EIA says
US GHG emissions post recent decline
EPA’s Clean Power Plan: How It Will Affect You
Advertisement