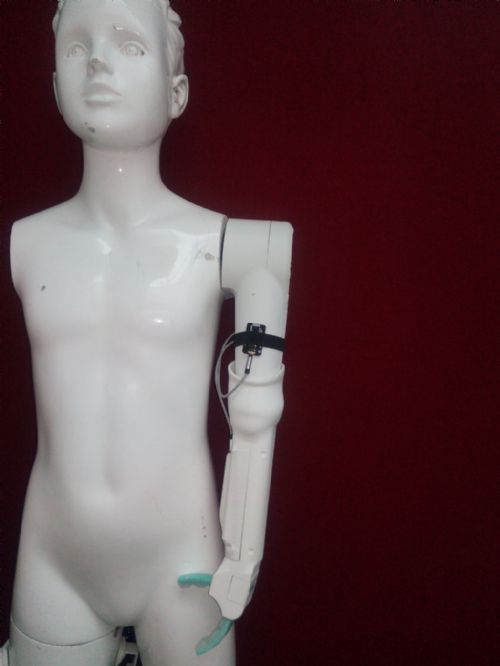 Source: University of Lincoln, U.K.While muscle-stimulated prostheses are common for adults, the expense of frequent replacements has been a deterrent to creating them for small children. Because children are constantly growing, they need new devices more often. Thanks to 3D-printing, however, engineers at the University of Lincoln, U.K., have developed a prototype for a myoelectric, sensor-operated prosthetic arm specifically for toddlers under two years old.

The SIMPA (Soft-Grasp Infant Myoelectric Prosthetic Arm) can be 3D printed at a much lower cost than a conventional prosthesis and the device can be custom fit to the child without having to use traditional plaster casting techniques. The process also allows for the early fitting of the myoelectric device, which reduces the risk of rejection.

The SIMPA is lightweight, has soft grip fingers and a seven-channel pediatric armband fitted with motion sensors that detect the electrical signals naturally conducted by muscles. Gripping and picking up objects with the prosthesis is similar to doing so with a natural arm.

According to Dr. Khaled Goher, lead engineer on the project, the device has been tested for grasp force and effectiveness using everyday objects such as toys, bottles and blocks. The next stage — testing the design on toddlers — will incorporate algorithm training, using games to engage with the toddlers and adjust the system to the "grab" signals from the armband.