Prosthetic hands have a steep learning curve for users as the devices can be challenging to control and to move exactly as the wearer intends. Neural interfaces used to amplify electromyographic signals from an amputee’s remaining muscles do not always result in intuitive control of a prosthetic and may cause scar tissue formation. An improved biological interface from the University of Michigan can now provide enhanced individual finger 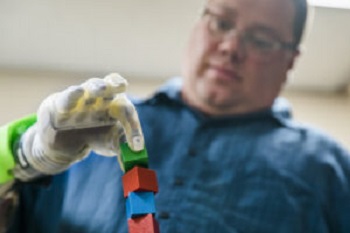 A study participant naturally uses his mind to control a DEKA prosthetic hand to pick up a small block. Source: Evan Dougherty, University of Michigan control of robotic hands.

The technology centers on the regenerative peripheral nerve interface, a small graft of muscle tissue surgically attached to the end of a severed nerve in an amputee’s arm, typically recorded by electrodes placed on the skin. Severed nerves attach to the new tissue, preventing the growth of neuromas and providing a platform for nerve signal amplification that results in naturalistic prosthetic control.