The Electron Ion Collider (EIC) would be designed and constructed over 10 years at an estimated cost of between $1.6 and $2.6 billion. Once it becomes operational, the collider would smash electrons into protons and heavier atomic nuclei in an effort to penetrate the mysteries of the “strong force” that binds the atomic nucleus together. 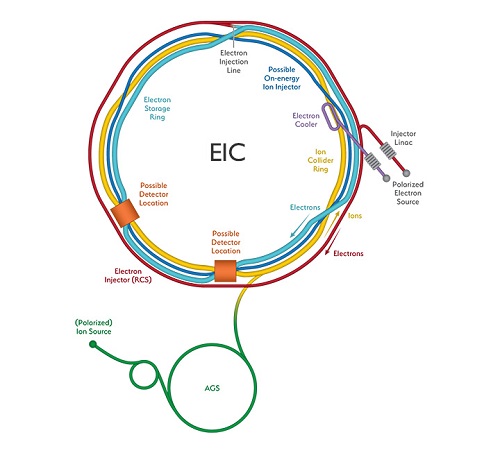 Schematic of the proposed EIC. Credit: Brookhaven National LaboratoryThe EIC’s high luminosity and highly polarized beams are expected to push particle accelerator science and technology and provide insights into the building blocks and forces that hold atomic nuclei together.

Design and construction of an EIC was recommended by the National Research Council of the National Academies of Science. Plans for an EIC were also endorsed by the federal Nuclear Science Advisory Committee.

Thomas Jefferson National Accelerator Facility in Newport News, VA will be a major partner in realizing the EIC. Several other DOE laboratories are expected to contribute to EIC construction and to its eventual research program.

By posting a comment you confirm that you have read and accept our Posting Rules and Terms of Use.
Advertisement
RELATED ARTICLES
The LHC Successfully Accelerated Its First Atoms
Video: Restart of the world’s largest particle collider
This camera can see deep into the universe
Video: Designing the future circular collider
Keeping the Large Hadron Collider cool with CO2 refrigeration
Advertisement