Tunnel boring is set to begin for the Coxwell Bypass Tunnel in Toronto, the first stage of the Don River and Central Waterfront Wet Weather Flow System.

The project is one of five projects with a price tag of C$3 billion ($2.29 billion) intended to improve water quality in the Lower Don River, Taylor-Massey Creek and along Toronto's Inner Harbor.

A tunnel boring machine nicknamed Donnie will dig the 6.3 m diameter, 10.5 km long Coxwell Bypass Tunnel parallel to the Don River. The tunnel will capture, store and transport combined sewer overflows, a mix of rainwater and sewage, for treatment at the Ashbridge's Bay Treatment Plant. 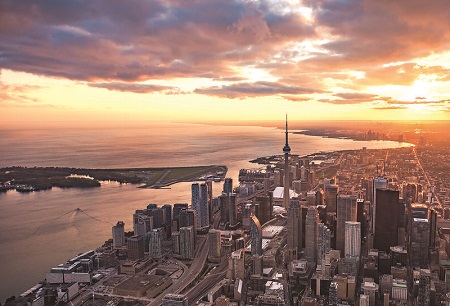 Toronto city skyline. Source: City of TorontoThe project is intended to keep combined sewer overflows out of Lower Don River, Taylor-Massey Creek and Inner Harbor by capturing it within the tunnel system and storing it during extreme rainstorms until system capacity can be restored and the water can be transported for treatment.

The project includes 12 wet weather flow storage shafts along the tunnels, 27 connection points to the tunnels for stormwater and combined sewer overflow, seven off-line storage tanks and controls to regulate flows in the city’s sewer system.

In 1987, the International Joint Commission identified Toronto’s waterfront as one of 43 polluted “Areas of Concern” in the Great Lakes Basin. It cited impaired water quality and sediment conditions in the Don River and Inner Harbor.

The city of Toronto said that water quality is degraded due to several factors, including:

Combined sewer overflows: Toronto’s original sewer system dates back more than a century and was built with combined sewers. Today, fewer than 25% of the city is serviced by combined sewers, where stormwater runoff and sewage travel in one pipe and can be discharged, untreated, into local waterways during extreme rainstorms.

Stormwater runoff: Stormwater runoff can include oil, grease, bird/animal droppings, pet waste, cigarette butts and other litter, bacteria and other pollutants that flows from impermeable surfaces into nearby streams and waterways.

Erosion and sediment conditions: Following construction of Ashbridge’s Bay Park in the mid-1970s, sediment eroding from the Scarborough Bluffs began to be deposited at the mouth of Ashbridge's Bay in the Coatsworth Cut navigation channel. Erosion and sediment conditions created the need for regular dredging to maintain safe passage for boats in the area. Currently, this is being done annually; however, the increasing dredging volumes and costs have been identified as unsustainable.

The boring machine is 115 m long and weighs nearly 1,000 tons. It was lowered into the 50 m deep and 20 m diameter shaft at the Ashbridge's Bay Treatment Plant in sections and then assembled. Once testing is complete in early 2020, the machine will work its way west along Lake Shore Boulevard East to Don Roadway, north up the Don River valley to the North Toronto Treatment Plant and then east to the Coxwell Ravine Park shaft site where the tunnel ends.

The machine is designed to bore at least 20 m of tunnel per day. The Coxwell Bypass Tunnel is expected to be completed in 2024.

By posting a comment you confirm that you have read and accept our Posting Rules and Terms of Use.
Advertisement
RELATED ARTICLES
25-km Sewage Tunnel to Be Built Under Thames
NYC Builds Rain Gardens to Ease Burden on Sewers
Developing a Skilled Green-Infrastructure Workforce
Preventing combined sewage overflows
Can a Rating System Ensure Infrastructure Sustainability?
Advertisement