25-km Sewage Tunnel to Be Built Under Thames

After years of planning, construction is set to begin on the Thames Tideway Tunnel—the largest infrastructure project ever undertaken by the UK water industry. The 25-kilometer, 7 meter-diameter interception, storage and transfer tunnel will run up to 65 meters below the river in London and, upon completion, provide a long overdue upgrade to the city's sewage system, which currently dumps tens of millions of tons of untreated sewage into the tidal Thames every year.

Like many older cities around the world, much of London is served by a combined sewage system that collects waste water from toilets, sinks, showers and washing machines, together with rainwater runoff from roads, roofs and pavements. Interceptor sewers, constructed by Sir Joseph Bazalgette following the "Great Stink" of 1858, still serve as the backbone of London’s sewer network today.

Bazalgette's design centered on using the city's natural drainage system of "lost rivers," such as the Fleet and the Tyburn, which had already been built over before Victorian times, to flow into the new interceptor sewers and transfer to balancing tanks in east London. In times of severe storms, the system was designed to overflow through discharge points on the banks of the river into the Thames, rather than flooding streets and homes. When it was first built, this happened once or twice a year. It now happens almost every week.

Rebuilding and separating this system using modern methods would cost £50-60 billion at today’s prices. Instead the city government chose a full-length tunnel solution as the most timely and cost-effective solution to tackle the problem. 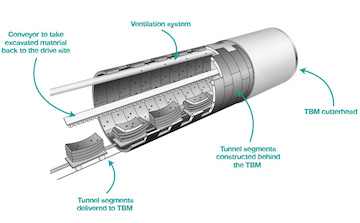 Cross-section of a tunnel-boring machine. Image credit: Tideway.Starting in west London, the main tunnel generally follows the route of the Thames to Limehouse, where it then continues northeast to Abbey Mills Pumping Station near Stratford. There it will connect to the Lee Tunnel, which will transfer the sewage to Beckton Sewage Treatment Works. Following the route of the Thames will enable it to connect to the combined sewer overflows that are located along the riverbanks, passing underneath all other infrastructure in London and through a variety of different ground conditions.

There will be three main "drive sites"—in Fulham, Battersea and Southwark—where tunnel-boring machines (TBMs) will be lowered into the ground and driven below the river bed to construct the tunnel from the east, west and central locations. The TBMs will excavate a circular tunnel using a rotating cutter head, while simultaneously creating a tunnel wall using concrete segments. As it excavates, it also transports material from behind the machine via conveyor belt or pump.

Innovative engineering in the design phase reduced the tunnel from the initial 32 kilometers proposed to 25 kilometers and lowered the number of construction sites required from 45 to 24 (11 of which are located along the riverbank).

The tunnel is expected to take up to seven years to build, at a cost of £4.2 billion. Its architects say the system is designed to cope with the demands of the city well into the 22nd century.