In the last decade, major events such as the I-35W bridge collapse in Minneapolis, Minn., and hurricanes Katrina and Sandy have highlighted significant problems in the United States’ aging infrastructure.

The 2013 Report Card for America’s Infrastructure, published by the American Society of Civil Engineers (ASCE), gave a D+ grade in assessing the current conditions and needs of all infrastructure across the country. The ASCE has identified sustainability as a strategically important priority in raising the America’s infrastructure grade point average.

“The goal of Envision is to change how we think about infrastructure, taking into account the triple bottom line of economic, environmental and social benefit,” says Terry Neimeyer, CEO of civil engineering firm KCI Technologies Inc. and spokesman for ISI. “We don’t want to be in dictation mode where we are saying, ‘These are the things you must do in order to be sustainable.’ We are here to influence the philosophy of how infrastructure projects are planned, designed, constructed, maintained, operated and decommissioned.”

Although Envision sets forth recommendations on how to approach sustainability through an infrastructure project’s lifecycle, civil engineers acknowledge challenges that need to be overcome when it comes to funding, public policy constraints and perception of sustainability. Despite the obstacles, engineers are showing their creativity in developing new infrastructure and retrofitting or repurposing the old.

Envision offers a checklist of 55 criteria across five categories: quality of life, leadership, natural world, resource allocation and climate and risk. (A second version of the program comprises a point system for users who seek a verified rating or recognition, similar to the levels of recognition described by U.S. Green Building Council and its LEED rating system for buildings.)

Another important factor in evaluating existing infrastructure is that the system or structure fit within existing physical space constraints. Addressing these considerations can help guide decisions on whether to replace, repair or upgrade infrastructure in light of its projected long-term use.

“Rather than the traditional design approach of open trenching and replacing the whole line with new, larger pipe, which can cause water outages and huge disruptions to the community, the engineer can consider pipe-bursting technology, which does not require excavating the existing pipe,” Hunt says. “Trenchless technology such as pipe bursting (which replaces existing pipelines in the same alignment without physically removing the existing pipeline) can increase the pipe size, minimize disruptions to the community, prevents the old pipe from going to a landfill and is often performed at a lower total cost than traditional methods.” 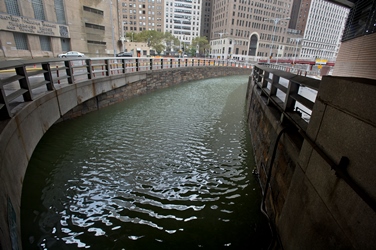 The Hugh L. Carey tunnel between Manhattan and Brooklyn flooded during Hurricane Sandy. Source:MTA/Patrick Cashin Stormwater, water supply and wastewater management are other areas for sustainable innovation, says Peter Binney, vice president of sustainable infrastructure at Merrick & Co. and a collaborator on the Envision rating system;s development. “The conventional approach for addressing combined sewer overflows was to build large tunnels and then to pump wastewater to sewage treatment plants for treatment before discharge,” he says. “That was very expensive, but now some cities are embracing green approaches that enhance infiltration of rain, promote community open space planning” and similar goals.

Philadelphia, Penn., for instance, has signed an agreement with the U.S. federal government for a $1.6-billion green infrastructure program that promotes watershed management. That's instead of a $6-billion tunnel and treatment option for managing combined sewer overflows. What's more, the city of Los Angeles in California is embarking on a Green-Blue City One Water Program to reduce its reliance on imported water supplies by pioneering sustainable water management programs including conservation, reuse and conjunctive-use approaches, says Binney.

Other examples of retrofitting within the existing physical space include smart grids for water systems, energy distribution and traffic management. Binney also says that high-voltage electric transmission corridors in the U.S. are likely to add significant performance capacity.

“There is a greater preponderance of public policy inaction as opposed to action,” Binney says. “Of the bold solutions we need, the government is directionally correct, but are they getting us to the economy of scale we’re going to need for infrastructure solutions that are needed 10, 20, 40 years down the road?" Binney expresses skepticism, but says public policy makers eventually will get to the point where they have to say , "We need to go more muscular with infrastructure solutions as opposed to the cosmetics of nice-to-have versus need-to-have.”

A related challenge is the public and political will to fund these projects.

“Infrastructure projects tend to be high-cost projects that benefit everyone, but no one individual wants to pay to do it,” Neimeyer says.

The “if it ain’t broke, don’t fix it” perception that many people ascribe to further complicates the issue of implementing sustainable infrastructure practices.

“Our infrastructure is somewhat taken for granted in that it works,” Neimeyer says. As a result, the public doesn't always respond positively to higher taxes or tolls to pay for infrastructure improvements. "Sometimes you don't get the ‘yes’ answer even though the needs are there,” he says.

When a government agency decides to fund an infrastructure project, “in a majority of instances the selection very much is based on identifying the lowest bidder,” says Burak Tanyu, assistant professor of geotechnical engineering at George Mason University’s Volgenau School of Engineering.

“To implement a sustainable design, the solution may not always align with building the project the cheapest way you can at the present time,” Tanyu says. That is different than looking at a lifecycle analysis, which provides information about the benefits now and in the longevity of the project in the future. He says this sort of approach is missing in most, if not all, of our infrastructure decisions. 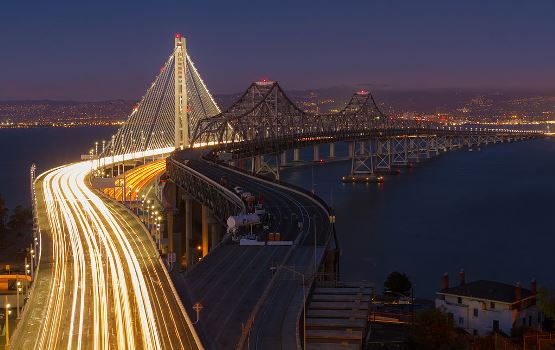 San Francisco Bay Bridge extension. Source: Wikipedia/Frank Schulenberg"We have to start looking at not only how much money we’re spending now, but also how do we benefit from this in the next 10 to 15 years," Tanyu says. "We should not be selecting to implement sustainability in our projects only based on if it makes economical sense at the present time.”

Furthermore, resiliency links to sustainability. In October 2012, Hurricane Sandy caused billions of dollars in damage to infrastructure systems in the northeastern United States, include transportation, power transmission, and water and sewage treatment facilities. “We have seen recently with cataclysmic events that if we would had done something a little more on the front end, we might not have these back-end issues that we are dealing with now,” Neimeyer says.

One example is the Envision tool's climate and risk section known as CR2.3, Prepare for Long-Term Adaptability. The tool asks if plans and designs have been created to prepare for long-term climate change, including the effects of increased intensity and frequency of extreme weather events, water scarcity, sea-level rise, extended droughts and increased ambient temperature. On one recently verified project, wetlands were being supplied water from two sources in an area subject to droughts.

Tools such as the Envision rating system may lay a foundation for more sustainable infrastructure. To build and restore infrastructure that considers people, planet and profit, however, both a shift in mindset and commitment to funding may be necessary to attain sustainability in the built environment.

“We must educate and advance sustainability knowledge of all stakeholders” and still remain profitable, Skanska’s Bishop says. “This is not an extremist approach but a sensible approach towards stewardship."

By posting a comment you confirm that you have read and accept our Posting Rules and Terms of Use.
Advertisement
RELATED ARTICLES
Smart Sensors Hit the Road
Engineering Solutions That Support Resilient Infrastructure
Clean Water, Big Price Tag
Companies to transform jack-up drilling rigs for green hydrogen production
Toolkits for sustainable manufacturing
Advertisement