How does a jet engine work?

Jet engines generate thrust by harnessing the principles of jet propulsion, expelling large volumes of fluid in one direction to propel a vehicle in the opposite direction. In aircraft, this forward motion creates a flow of air over the wings that produces lift to keep the airplane in the sky.

The thrust generation is accomplished by exploiting Newton’s third law of motion, which states that for every action (force) there is an equal and opposite reaction (force). As air and combustion gases are forced out of an engine, they exert a corresponding force back on the engine, pushing the aircraft forward. In this way, jet engines are a type of reaction engine.

The term "jet engine" encompasses a variety of propulsive devices. From ramjets to turbofans, each jet engine design converts energy to propulsive power in different ways.

A typical type of jet engine known as a turbojet ingests air from the atmosphere, compresses and heats it, and allows it to exit at high velocities. At the front end of a turbojet, air is sucked into a duct. After entering this inlet, the air encounters the compressor section of the engine.

The compressor is comprised of multiple stages of rotors and stators, which are rotating and stationary discs tipped with blades that compress air into smaller volumes, raising its pressure. The rotor’s blades are shaped like tiny airfoils that impel air toward the stator. The stator’s fixed blades function as a diffuser, lowering the air’s velocity and increasing its pressure. The rotors and stators are installed in an alternating arrangement (rotor, stator, rotor, stator), working in tandem to raise air pressure.

This high-pressure air then enters the combustion chamber where atomized jet fuel is injected into it and ignited, producing very hot, high-pressure gas. Fuel is fed to the engine from the fuel tank by a low-pressure booster pump. Before entering the combustion chamber, fuel pressure is further increased by a two-stage main fuel pump to achieve adequate pressure for nozzle spray atomization. A portion of the pressurized fuel is sometimes utilized for purposes other than combustion, such as in “fueldraulics” fluid power systems that actuate variable compressor geometry, bleed air valves and turbine cooling valves.

The combustion products are channeled through a turbine section made up of several more stages of spinning-blade discs. The turbine extracts energy from the hot gases to power the compressor, to which it is connected by a shaft. Finally, the gas exits the engine through a converging nozzle at the rear, decreasing in pressure as it gains velocity. The high-velocity mass of gases provides the thrust that propels the airplane forward. 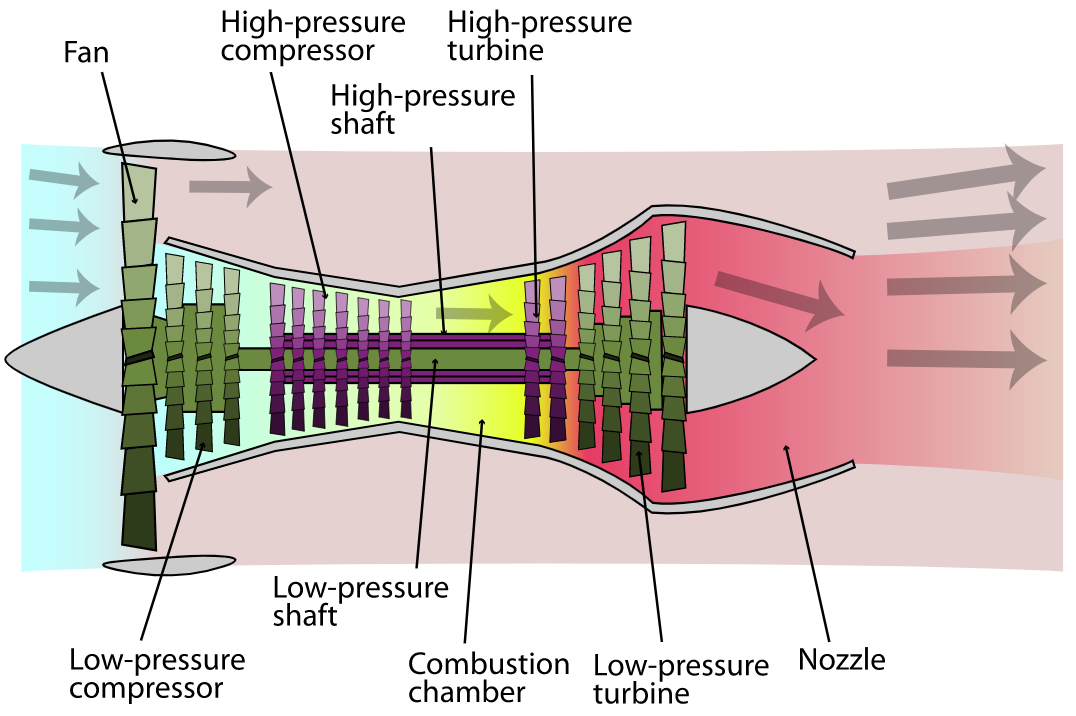 Modern commercial passenger aircraft are equipped with jet engines known as turbofans. These engines are similar to turbojets — with fan, compressor, combustor, turbine and nozzle sections — but they do have some significant design differences.

Just inside the inlet of a turbofan engine is a large fan that draws in a much larger volume of air. Some of this air is directed into the compressor, but most of it is transported around the core gas turbine to the rear of the engine. Turbofans derive a majority of their thrust from this bypass flow of air. The large volume of air moving at slower velocities creates less noise than a turbojet and results in more fuel-efficient operation.

Turbofan engines have better overall fuel efficiency than turbojets at the cost of increased mechanical complexity. In addition to the core compressor, turbine and shaft, the fan is powered by another shaft connected to an additional turbine.

This configuration allows each spool to function at its optimal operating point, improving engine efficiency. On some engines — in particular, Rolls-Royce turbofans — the high-pressure spool is further split into two sections, resulting in a total of three compressor-turbine spools: low-pressure, intermediate-pressure and high-pressure.

Other types of jet engines include turboprops, turboshafts, propfans and ramjets.

Turboprops consist of a propeller driven by a turbojet-type engine. Unlike turbojets, turboprops extract more energy from combustion gases in the turbine section to transmit almost all of their power to a shaft that drives the propeller instead of generating high-thrust exhaust. 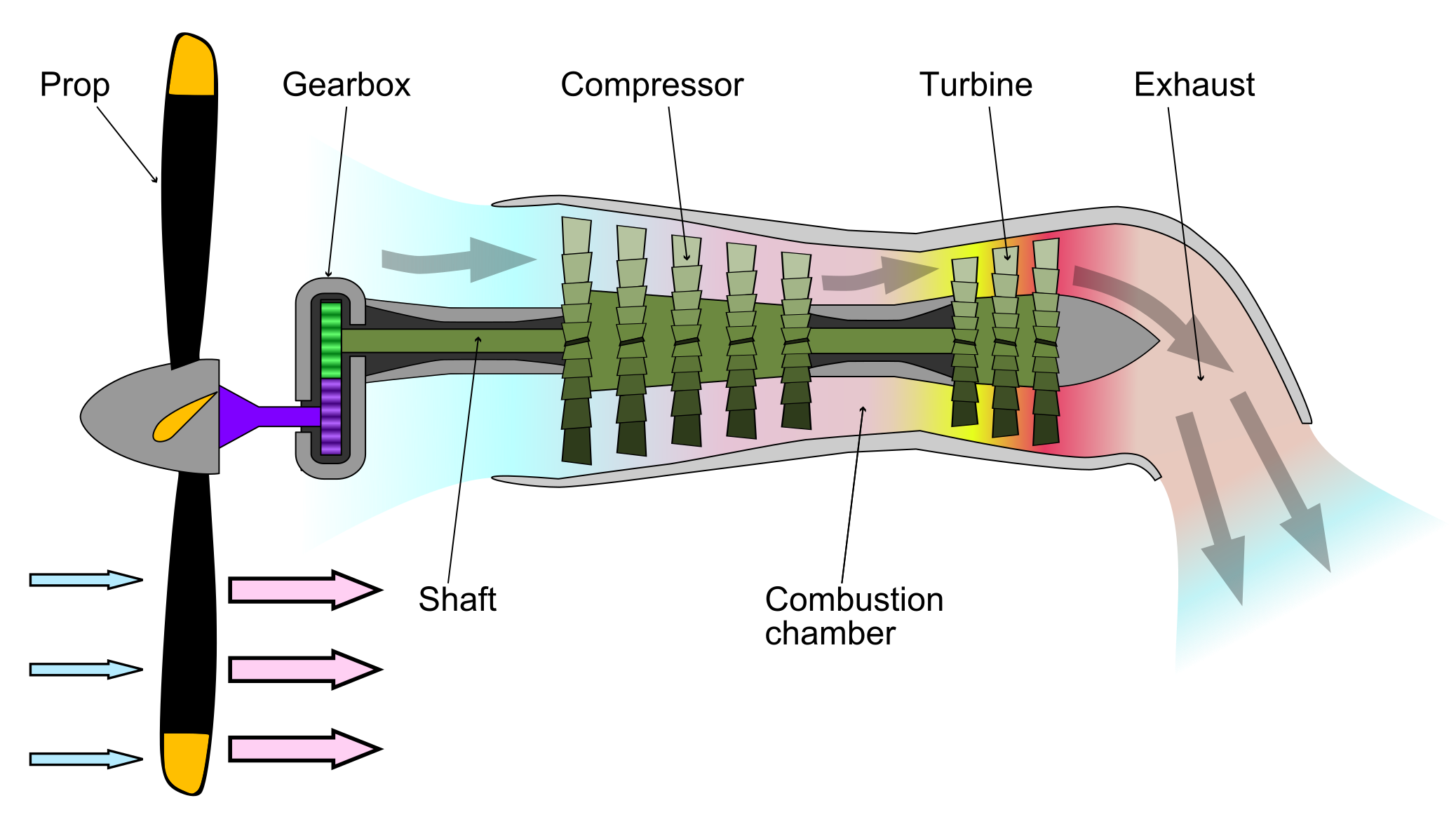 Turboshafts are similar to turboprops in that they employ a turbojet-type engine to drive a shaft. Instead of direct shaft attachment to a propeller, however, turboprops drive transmissions in applications like helicopters, ships and tanks. 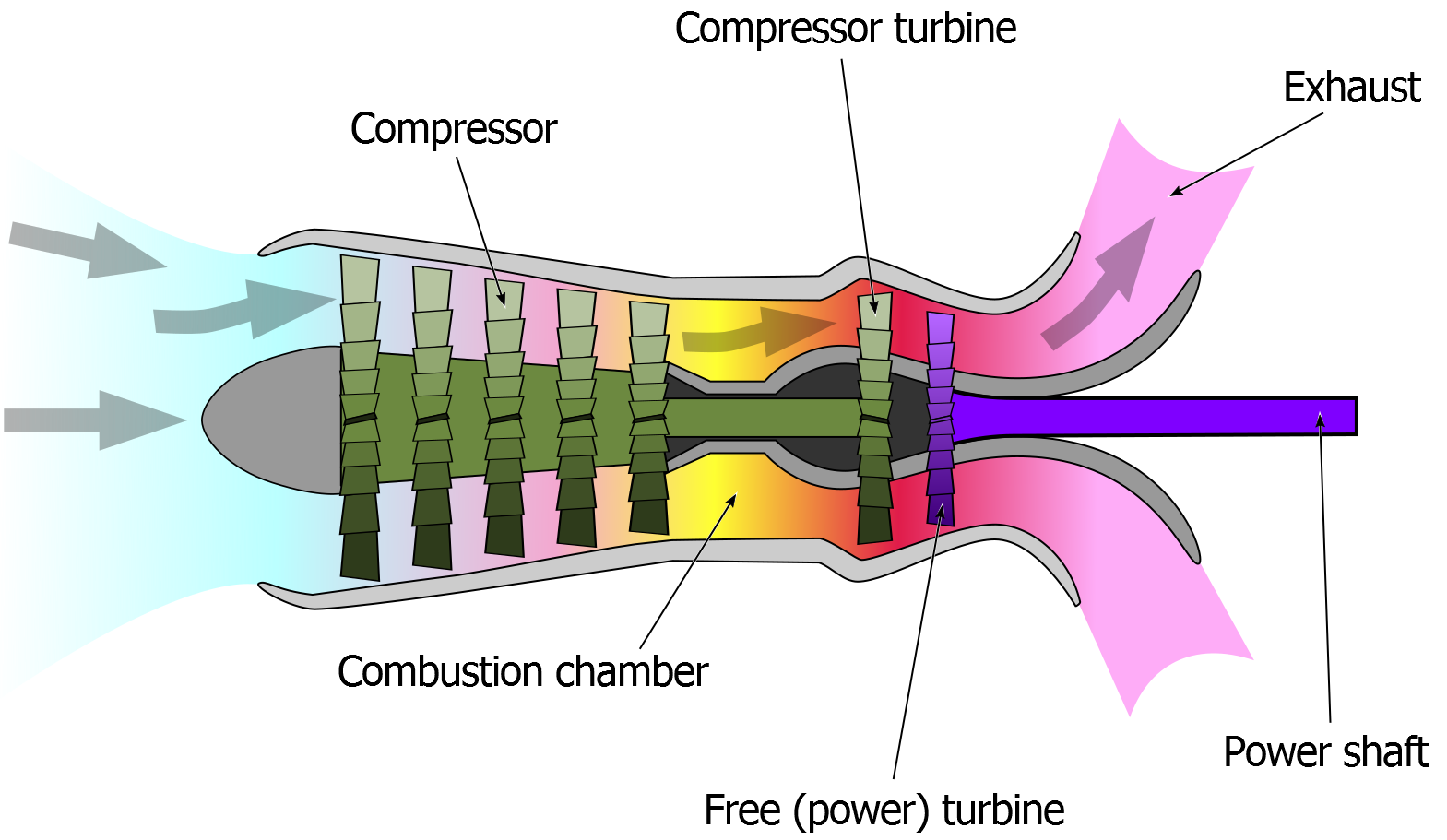 Propfans, also known as open rotor engines, are similar to turboprops, but instead of typical propeller designs, propfans are equipped with a large number of specially-contoured blades mounted externally at the front, mid or rear of the nacelle, in some cases in a contra-rotating configuration consisting of two rotors rotating in opposite directions. Propfans offer high fuel efficiency but they produce more noise compared to designs that enclose the propeller or fan sections within a nacelle.

Ramjets are simple jet engines that lack the rotating machinery contained in turbojets. Instead of compressing air using spinning compressors powered by a turbine section, ramjets exploit the forward motion of the aircraft as a means to generate high-pressure air. Fuel is then injected into the flow, ignited and exhausted through the nozzle to produce thrust.

Ramjets generate no thrust without forward aircraft motion and very little thrust until the aircraft approaches the speed of sound, reaching peak efficiency at supersonic speeds around Mach 3. Scramjets are ramjets that carry out combustion in fuel/air mixtures flowing at supersonic speeds, allowing them to operate more efficiently at aircraft speeds above Mach 6. 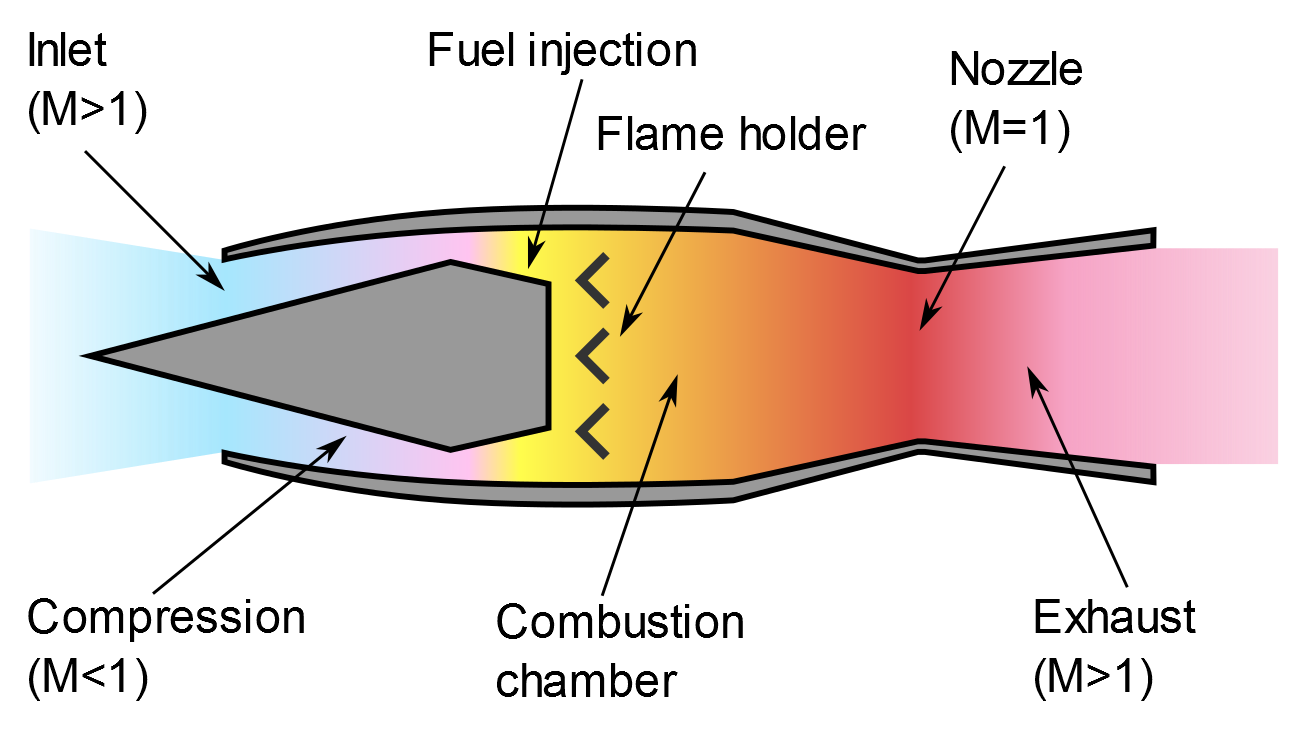 Rocket engines use jet propulsion to generate thrust by burning propellants and exhausting the combustion products through nozzles. Unlike jet engines that ingest atmospheric air to utilize its oxygen in the combustion reaction with fuel, rockets store both the oxidizer and fuel onboard, allowing them to operate in the vacuum of space in addition to Earth’s atmosphere. The propellants are stored in separate tanks in liquid-fuel rockets or as a fuel-oxidizer mixture known as a grain in solid rocket motors.

To get a feel for typical working temperatures and pressures through the various stages of a jet engine, consider the figure below, which shows a cross-section of the Pratt and Whitney JT9D-7 high-bypass turbofan engine. The JT9D-7 powered the original Boeing 747 when it entered service in 1970. Variants of the engine also powered later versions of the 747 as well as the 767, Airbus A300, A310 and McDonnell Douglas DC-10. 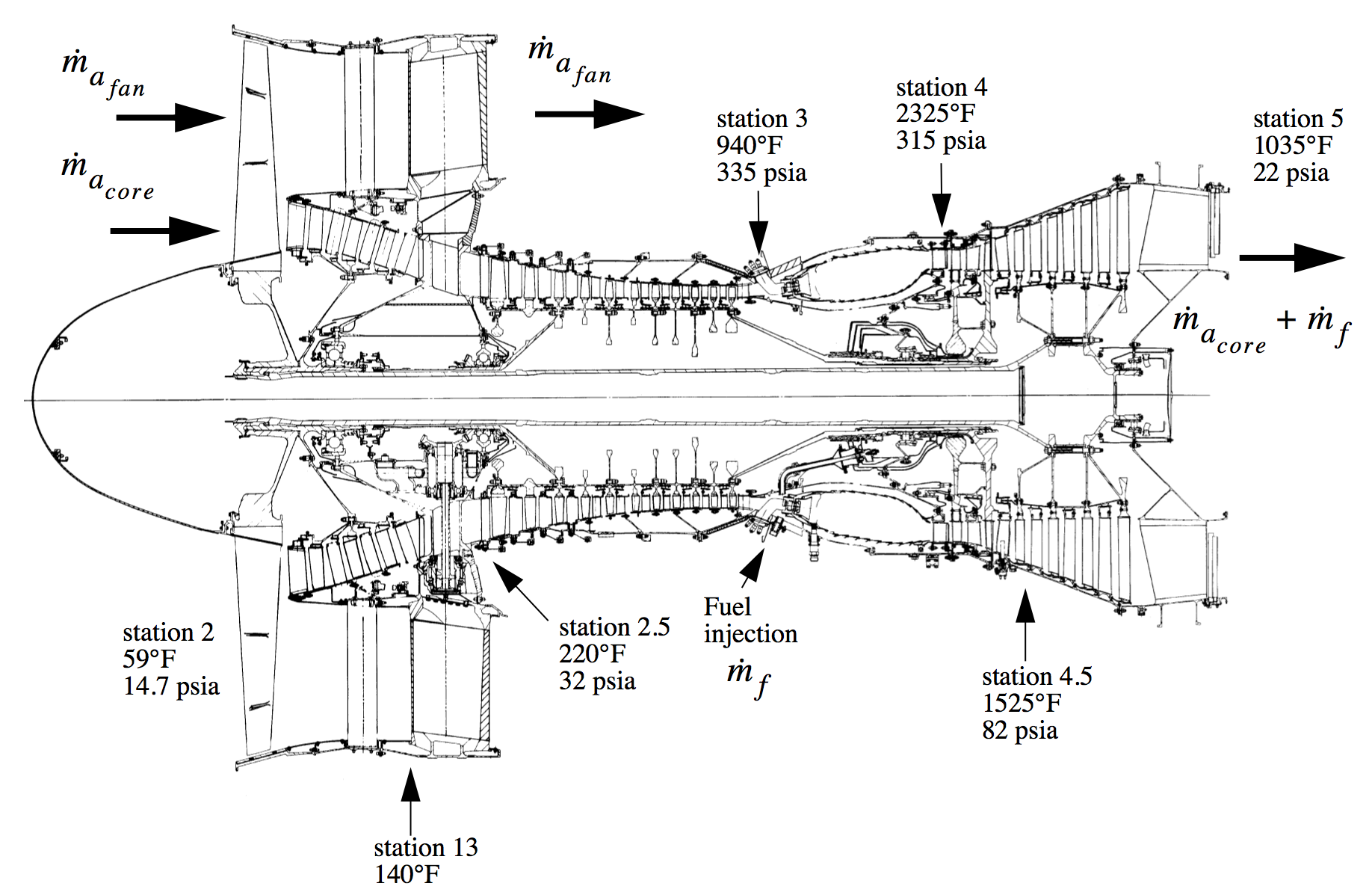 Station 13 is located in the fan bypass path at the exit of the fan but before the entrance to the fan exhaust nozzle. At this station, bypass air temperature has increased to 140° F after passing through the inlet and fan.

Station 3 is located at the exit of the high-pressure compressor before the combustion chamber. By this point, engine core air has reached a temperature of 940° F and its highest pressure of 335 psia.

Station 4 is located at the exit of the burner before the high-pressure turbine. Combustion has resulted in a spike in gas temperature to 2325° F. Pressure has decreased slightly to 315 psia.

Station 5 is located at the exit of the turbine, where gas has dropped to 1035° F and 22 psia. After station 5, the gas is exhausted through the nozzle and mixes with freestream air, expanding back to freestream pressure conditions and returning to ambient temperature.

Part 2 of this series will examine the fundamental thermodynamic cycle that describes jet engine operation as well as review two measures of jet engine efficiency.

How does a jet engine work? | NASA

By posting a comment you confirm that you have read and accept our Posting Rules and Terms of Use.
Advertisement
RELATED ARTICLES
How does a jet engine work? Brayton thermodynamic cycle and efficiencies
SABRE: A Hypersonic Precooled Hybrid Air-breathing Rocket Engine
GE’s New Jet Engine is a Modern Engineering Marvel
PurePower: An Advance in Aircraft Propulsion
A look at aircraft HVAC systems
Advertisement