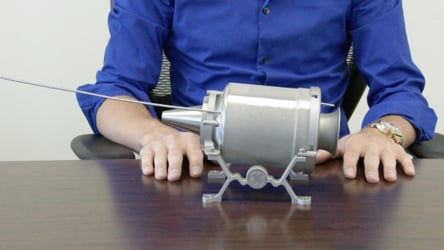 GE engineers made a 3D-printed mini jet engine that roared at 33,000 rotations per minute. Image credit: GEEngineers at General Electric (GE) created a 12-inch-long jet engine using direct metal laser melting (a type of additive manufacturing or 3D printing), and tested the engine by spinning it up to 33,000 rotations per minute. The manufacturing technique builds 3D objects by melting metal powder layer upon layer.

The jet engine is based on a design for a radio-controlled aircraft and was subjected to a similar workout as a full-sized engine.

The engine is mainly a proof-of-concept. In April, the Federal Aviation Administration in the U.S. cleared the first 3D-printed part to fly in a commercial jet equipped with GE engines. The part is the housing for a compressor inlet temperature sensor within the jet engine.

By posting a comment you confirm that you have read and accept our Posting Rules and Terms of Use.
Advertisement
RELATED ARTICLES
NASA Close to Building a 3D-Printed Rocket Engine
Factors to Consider When 3D Printing or Additive Manufacturing Metal Parts
3D Printed Parts from General Electric Set for Retrofit in 400 Jet Engines
How Strong Are 3D-Printed Metal Parts? Metallurgical Integrity in Metal Additive Manufacturing
How does a jet engine work? Brayton thermodynamic cycle and efficiencies
Advertisement