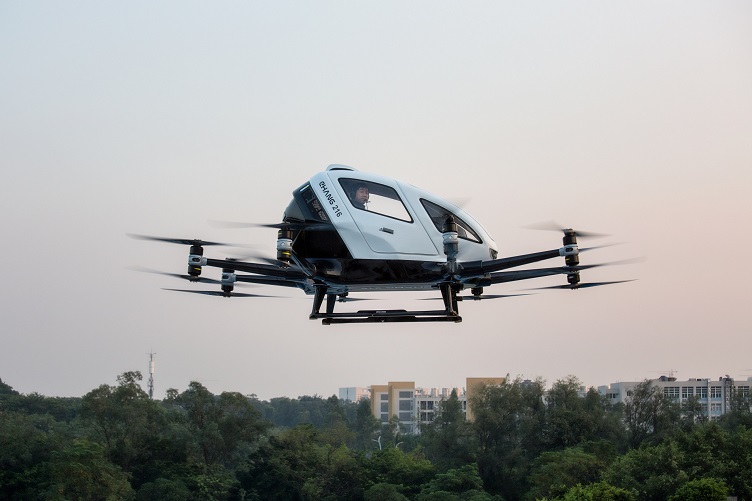 About a year and a half ago, EHang was one of the first flying car companies to show an actual prototype in action, carrying passengers. The EHang 184 autonomous flying car performed a series of manned flight tests carrying one and two passengers.

The certification for safety Level 2 was issued by the China Academy of Civil Aviation Science and Technology (CAST) and is recognized as a member of the China National Accreditation Service for Conformity Assessment (CNAS).

EHang said the command-and-control system on the flying car manages the vehicle’s flight routes with real-time remote communications via 4G and 5G telecom networks. This is a safer and simpler approach than conventional drones that are manually controlled by radio frequency within limited distances.

EHang is just one of a number of startups developing flying cars. A few years ago, AeroMobil began accepting preorders for its flying car that has both driving and flying modes. Pal-V has been in development of its own dual-mode flying car, the PAL-V Liberty, for two years, setting up its design and production process as well as its supply chain. Even DeLorean Aerospace has returned to develop something out of the motion picture “Back to the Future” with its own two-seat vertical takeoff and landing (VTOL) personal air vehicle.

While none of these vehicles are available yet, products are already being tested to help develop them such as Goodyear’s concept tire, which functions as both tires for the road and as the propeller for flying. The online university Udacity is even offering a program for engineers to learn how to build, design and proliferate the flying car technology.

While the novelty of flying cars is producing hype, it is still unclear if that hype will translate to any environmental impact compared to standard ride-sharing cars or commuter vehicles. A recent report from the University of Michigan found that flying cars may not be an environmentally friendly option for short commutes, but for longer routes the flying cars could play a niche role in the future of sustainable mobility.

Shouldn't it be an aerofence since it affects objects in flight?

I wouldn't be ready to trust this device with my life or loved ones due to the demonstrated unreliability of Chinese materials, welding and assembly. I think that they are still buying jet engines from Russia due to theirs not meeting their own standards.