The paper, Interoperability of Public Electric Vehicle Charging Infrastructure, addresses four challenges and how each may impact customers, site hosts and electric companies:

The eight-page paper frames interoperability as the "harmonizing of standards, technology and practices" for EV charging.

Charging network-to-charging network: The paper said that EV service providers tend to operate their networks as islands that lack communication or integration with other networks. In the current context, interoperability refers to a vision in which EV drivers can access public charge points from any owner/operator through a common platform and a single network subscription or contract (also called “e-roaming”). 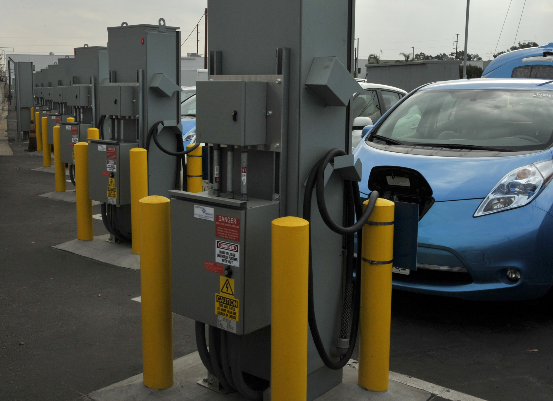 Network structures could borrow from ATM connectivity used in banking. Source: U.S. Air Force photo/Sarah CorriceThe paper said that this sort of customer-friendly, public charging infrastructure depends on a web of business-to-business contracts between network providers and interoperability among their respective back-end systems. The structure could be similar to the interoperability of financial and banking systems to enable interbank and cross-border automated teller machine usage and mobile roaming capabilities enabled by interoperability among multiple wireless telecommunication networks.

Charging station-to-network: The paper said that networked charging stations must communicate with their supporting networks. Proprietary protocols can create “vendor lock-in” challenges that commit customers to a single, closed-network provider for the lifetime of the charging equipment.

An open standards-based approach that includes both technical capabilities and contractual rights would allow owner-operators to switch between network service providers without having to buy new charging stations and to install new charging stations without having to change network service providers. The report said that this can help stimulate competition and protect infrastructure investments against obsolescence.

The report said that the Open Charge Point Protocol (OCPP) is an open networking standard that is widely used in Europe and is growing in acceptance in the U.S. It said that while current versions (OCPP 1.5, 1.6 and 2.0) exhibit functionality gaps, their acceptance by most network providers and continued development may be important to addressing network interoperability.

Physical charging interface: The white paper said that a single standard for common AC charging is widely accepted in the U.S. (with Tesla vehicles requiring an adaptor), three different DC charge ports are used today. Issues with fragmentation of the early Level 2 AC charging market were mitigated by adoption of the SAE J-1772 standard. This provides automakers and those deploying charging infrastructure with a common system architecture. Meanwhile, the report said the lack of a single accepted standard for DC charging for light duty EVs increases operational complexity and costs, and can lead to customer confusion as public DC fast charging expands.

Vehicle-grid: Collaboration among EV and charging station manufacturers, network operators, site hosts and electric companies will be necessary, the report said, to implement emerging vehicle-grid integration technologies. At present, electric companies and grid operators are limited in their engagement to support secure, cost-effective, reliable public charging stations at scale by the lack of interoperability among networked systems and limited implementation of open protocols for electric company communications.

No truer words have ever been spoken......however, don't forget what free enterprise is all about! If somebody insists on a proprietary charger for their vehicle, then who are we to stop them from shooting themselves in the foot? There are far too many examples of "Non standardization" and the accompanying pitfalls that result. That being said, they should remember that pain is instructive!!!!

(but they're the exception, not the rule.)

I believe we have two standalone charging providers nationwide and several regional utility based. The only actual, worldwide charger network is the one Tesla built. The technology patents have all been public for years now. Any company could have used it as their network also.

The problem with the Tesla network is you have to be serious about electric cars and not CAFE credits. You have to have a good battery to charge fast and most companies don't. Nissan never did. Its Leaf Battery can't even handle level 1 (120kw) charging from a Tesla charger. All Model three batteries can handle up to 450KW surge. When level three goes on line end of this year Ill be able to charge from 0 to 100% in 10 minutes.

Our local Walmarts are putting in chargers up to 300kw even though no cars other than Teslas currently on the road use that level of power. It look like they are going with the European Chademo connectors. So one can assume Volkswagon has been instrumental.

The rest of their concerns are smoke and mirrors. You use a credit card at the charger just like you do at the gas pump. As long as the batteries are standardized and the charges are "smart" then you pay at point of purchase. it matters not whose point.

EV's are on track for rapid ramp-up. Though vehicle range continues to improve, it remains the primary consumer concern, along with the related concern of charging accessibility. A limited overall availability of charging facilities would only be compounded by a lack of interoperability between different providers/networks. Governmental/public interest in promoting rapid adoption would argue for universal connectivity regulation.