Electric vehicles could benefit from this deployment plan

In a filing with state regulators, the utility outlined its three-year plan to offer incentives to customers. The proposal would help fund the adoption of electric school buses and public transportation, and also could lead to almost 2,500 charging stations across the state. 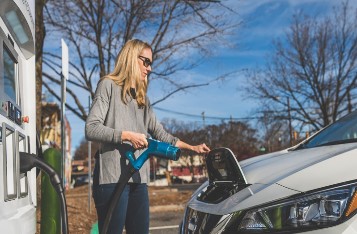 The proposal could lead to almost 2,500 charging stations across the state. Source: Duke EnergyCurrently, North Carolina has more than 10,000 plug-in hybrid and all-electric vehicles and around 600 public charging stations.

The utility said that it intends to recover the costs of the pilot program through base rates charged to customers.

The proposal has several components:

The program would provide a $2,500 rebate for 900 qualifying charging stations for commercial and industrial customers that operate fleets that are moving to electric and plug-in hybrid vehicles. Municipalities and universities also would qualify for these rebates.

The utility would provide financial support to eligible customers to procure up to 85 electric school buses. Duke Energy would install the associated charging infrastructure.

The program follows a similar $10.4 million program being considered by the utility regulators in South Carolina. And it would follow a number of other utility-backed initiatives across the country to promote EV adoption.

By posting a comment you confirm that you have read and accept our Posting Rules and Terms of Use.
Advertisement
RELATED ARTICLES
Video: Utility Given Green Light for Vehicle Electrification Pilot
Beijing EV Filling Station Charges 30 Buses at a Time
This Midwest Utility Is Expanding Its EV Charging Network
Opportunity Charging for Electric Buses in the UK
Got an Idea for an EV Charger? Tell Con Edison!
Advertisement