Turbulent heat exchange, a method used in many HVAC systems, has been shown to get a substantial boost to its capacity for moving heat from the addition of an organic solvent, according to researchers from Tsinghua University and Brown University. 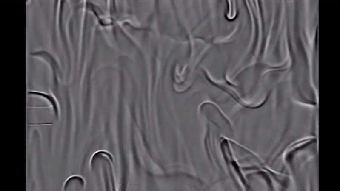 Some heat exchangers use hydrofluoroether (HFE) as the liquid; others use only water. The researchers were able to achieve a 500% improvement by applying an idea conceived by Chao Sun, professor at Tsinghua, to add HFE to water-based systems.

“Other methods for increasing heat flux — nanoparticle additives or other techniques — have achieved at best about 50% improvement,” said Varghese Mathai, a postdoctoral researcher at Brown and co-first author of the study.

Over a three-year period Mathai, Sun and the study’s co-first author Ziqi Wang tried adding small amounts of HFE in order to maximize its effectiveness in speeding heat exchange. The team found that concentrations of around 1% HFE maximize the heat flux enhancements. They used high-speed imaging and laser diagnostic techniques to show how the HFE quickly boils and rises in the form of biphasic bubbles of vapor and liquid and then quickly falls back down as liquid after reaching the cold plate. The amount of heat carried by the bubbles as well as the speed of their movement accounts for the overall improvement in heat flux.

“This basically stirs up the system and makes the plumes move faster,” Sun said. “Combined with the heat that the bubbles themselves carry, we get a dramatic improvement in heat transfer.” The video below (courtesy of Brown University) shows a conventional turbulent heat exchanger with an injection of ink on the left and the same heat exchanger with the addition of HFE on the right. The HFE mixes all the ink into the system in about four seconds.

These results are only applicable to vertical heat exchangers, but the team is working on adapting this technique for side-to-side exchangers. The researchers believe this process could also benefit other systems that mix two or more liquids.

“This biphasic approach generates a very large increase in heat flux with minimal modifications to existing heating and cooling systems,” Mathai said. “We think this has great promise to revolutionize heat exchange in HVAC and other large-scale applications.”

HFE7000, the additive used in the study, is non-corrosive, non-flammable and ozone-friendly.

The paper on this study is published in Nature Communications.