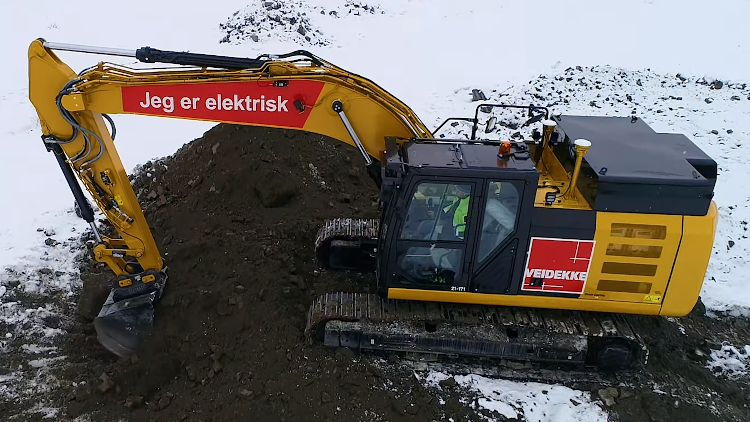 In the construction vehicle market, large-scale mobile machinery has largely been powered by internal combustion engines. But as electric powertrain technologies including motors and batteries advance, heavy construction machinery powered by electricity is becoming a reality. 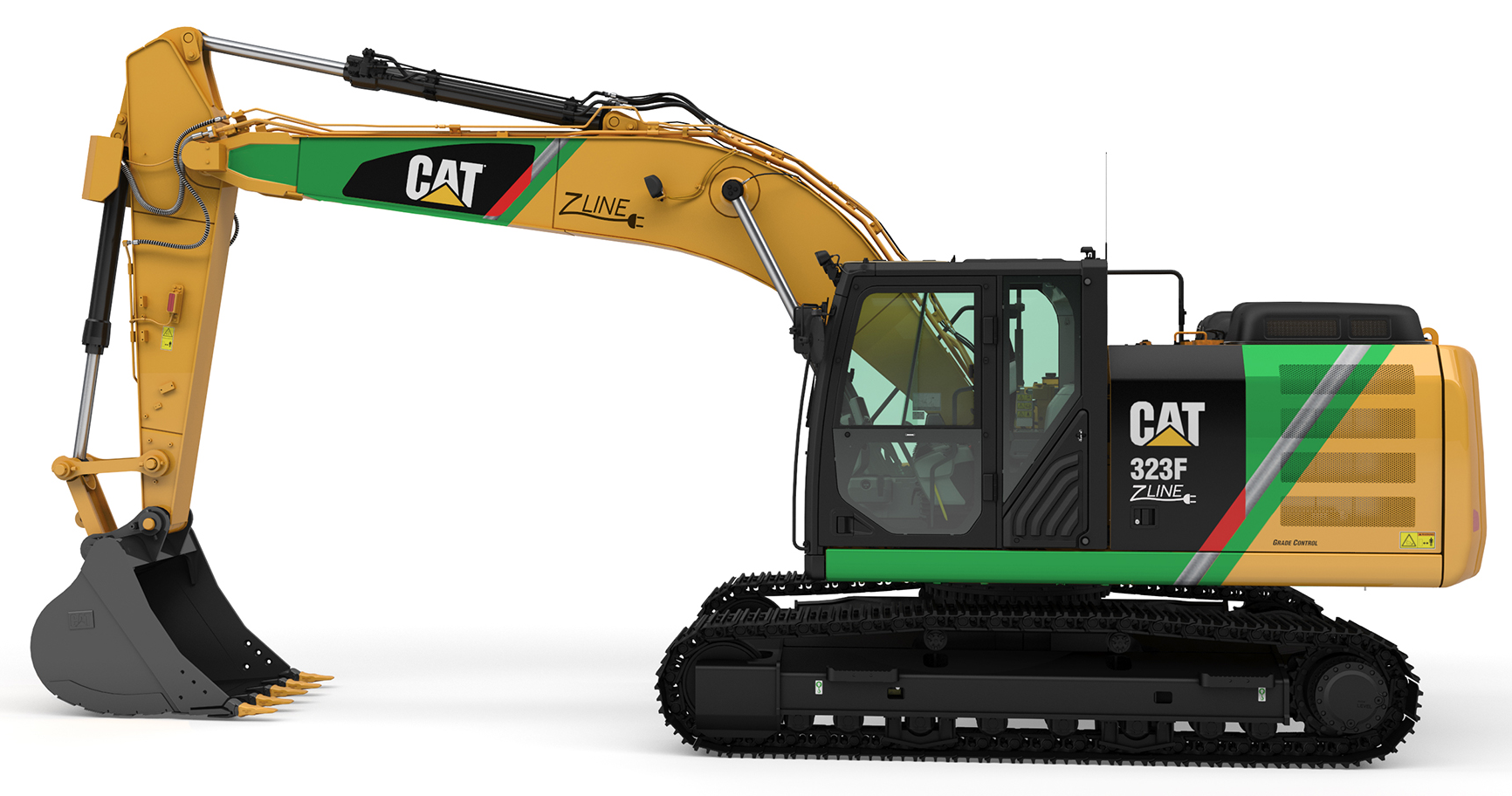 The world’s first large-scale electric excavator, the 25 tonne Cat 323F Z-line, operates on battery power alone without the help of a diesel engine. The excavator is nearly identical to the diesel-powered Cat 323F excavator, except its diesel engine has been replaced with an electric powertrain.

The conversion was carried out by Pon Equipment, the official Caterpillar dealer in Norway, Sweden, Denmark and the Netherlands. The company was spurred by Norway’s pledge to become carbon neutral by 2030 along with a push by the country’s capital city, Oslo, for zero-emission construction sites. 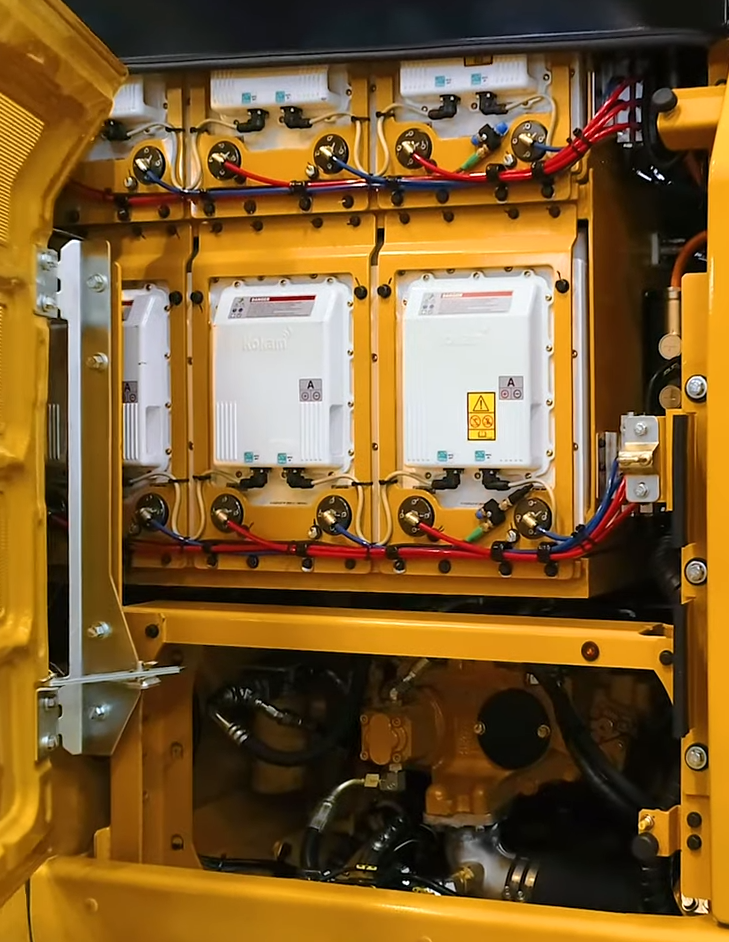 Behind the hatch of the Cat 323F Z-line. The hydraulic pump is seen below a large stack of batteries. Source: Pon Cat

The electric excavator’s powertrain system — provided by Danfoss Editron, a subsidiary of Danfoss Power Solutions — eliminates the noisy, dirty diesel engine in the 323F and replaces it with a battery pack and electric motor to power the excavator’s hydraulic system.

The electric powertrain enables the 323F Z-line excavator to operate emission-free without sacrificing power or performance compared to the diesel version. With no combustion engine, the electric excavator also consumes no diesel fuel, produces no direct CO2 emissions and generates much lower noise than its diesel counterpart.

A key element of the powertrain is the 300 kWh battery pack that powers the 122 kW electric motor. On a full charge, the battery provides enough power for five to seven hours of excavator operation. The machine can also operate continuously if plugged into an external power source.

[Discover AC motors and batteries and filter products by specification on Engineering360.]

Weighing 3.4 tonnes, the battery pack has three times more capacity than the largest battery available for Tesla vehicles. The significant weight of the batteries required a redesign of the ballast block that balances the weight of the digging arm; the ballast was downsized from the massive 6 tonne version in the diesel excavator to a smaller steel block.

The batteries are ruggedized, heavy-duty storage cells rated for use in maritime applications, ensuring they can withstand the harsh vibrations and shocks of the construction environment. The batteries are also designed for longevity, rated to retain 80% of their charging capacity after 10,000 hours of operation.

One hour of charge over a 400 V mains connection provides one hour of operation. A fast-charge option fills the battery completely within two hours from a 1,000 V source. 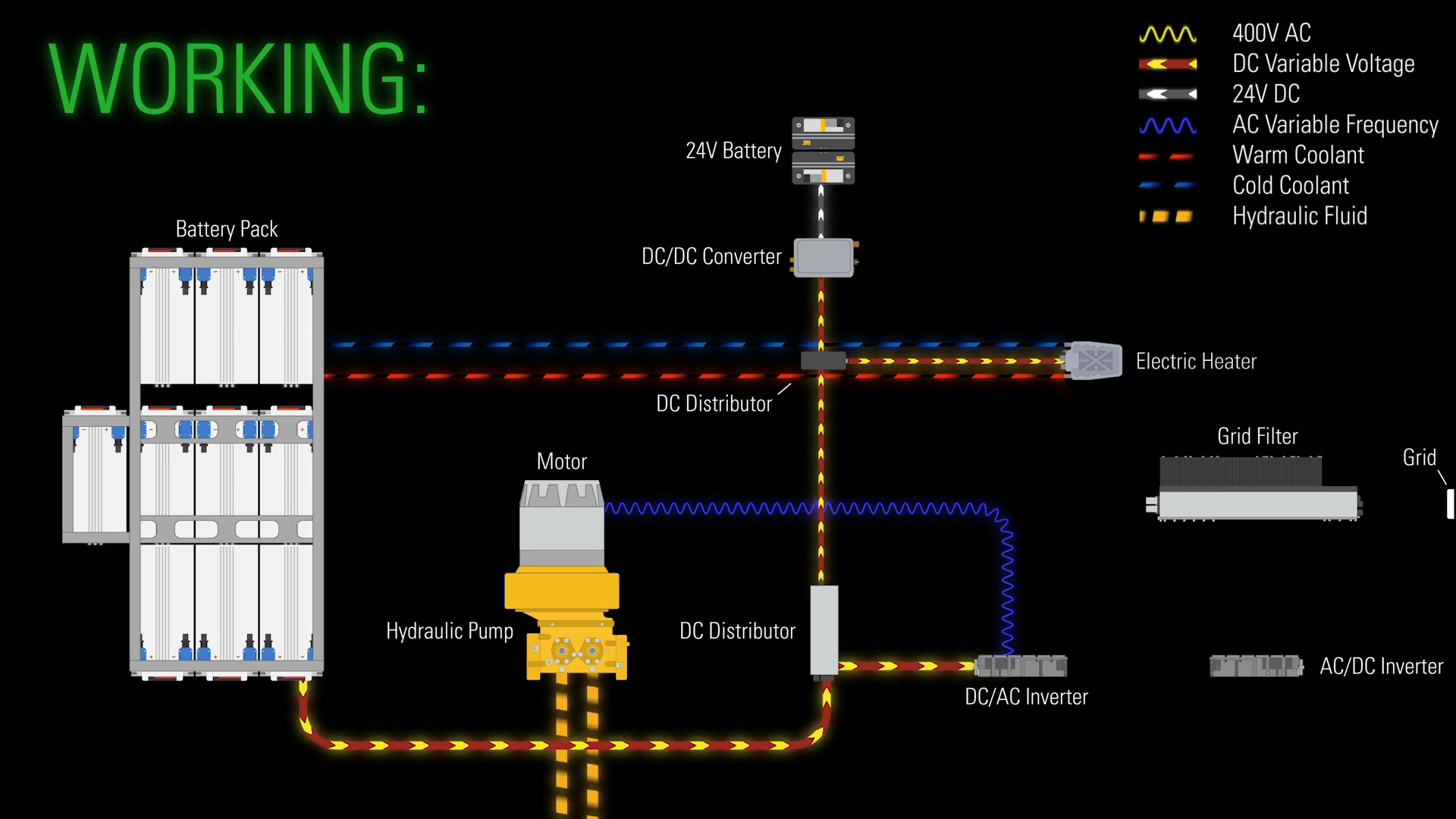 In operation, the 323F Z-line electric excavator is powered by electricity according to the following steps: 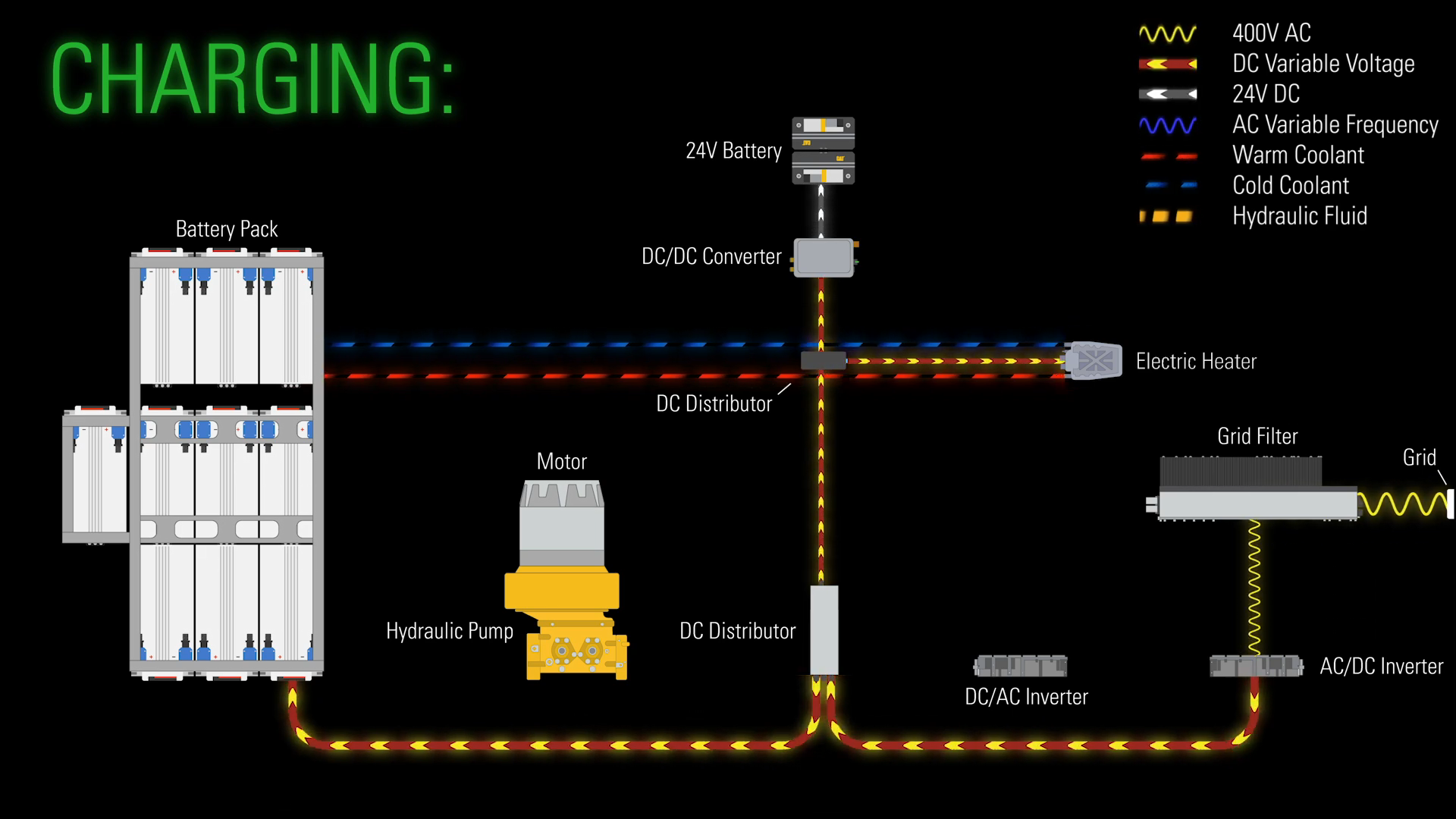 Power flow schematic for the 323F Z-line electric excavator as it recharges from the grid. Source: Pon Cat. (Click image to enlarge.)

To recharge its battery pack, the 323F Z-line electric excavator draws power from the grid according to the following steps: 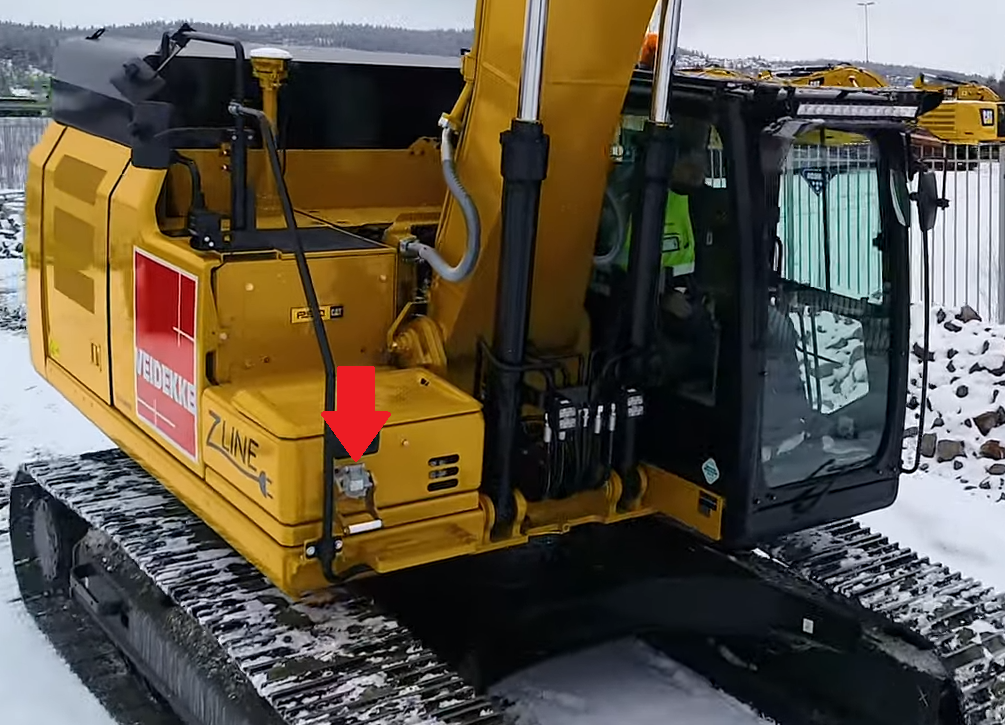 The charging port is located on the front of the excavator’s house on the opposite side of the operator’s cabin. Source: Pon Cat

[Discover DC-AC inverters and DC-DC converters and filter products by specification on Engineering360.] 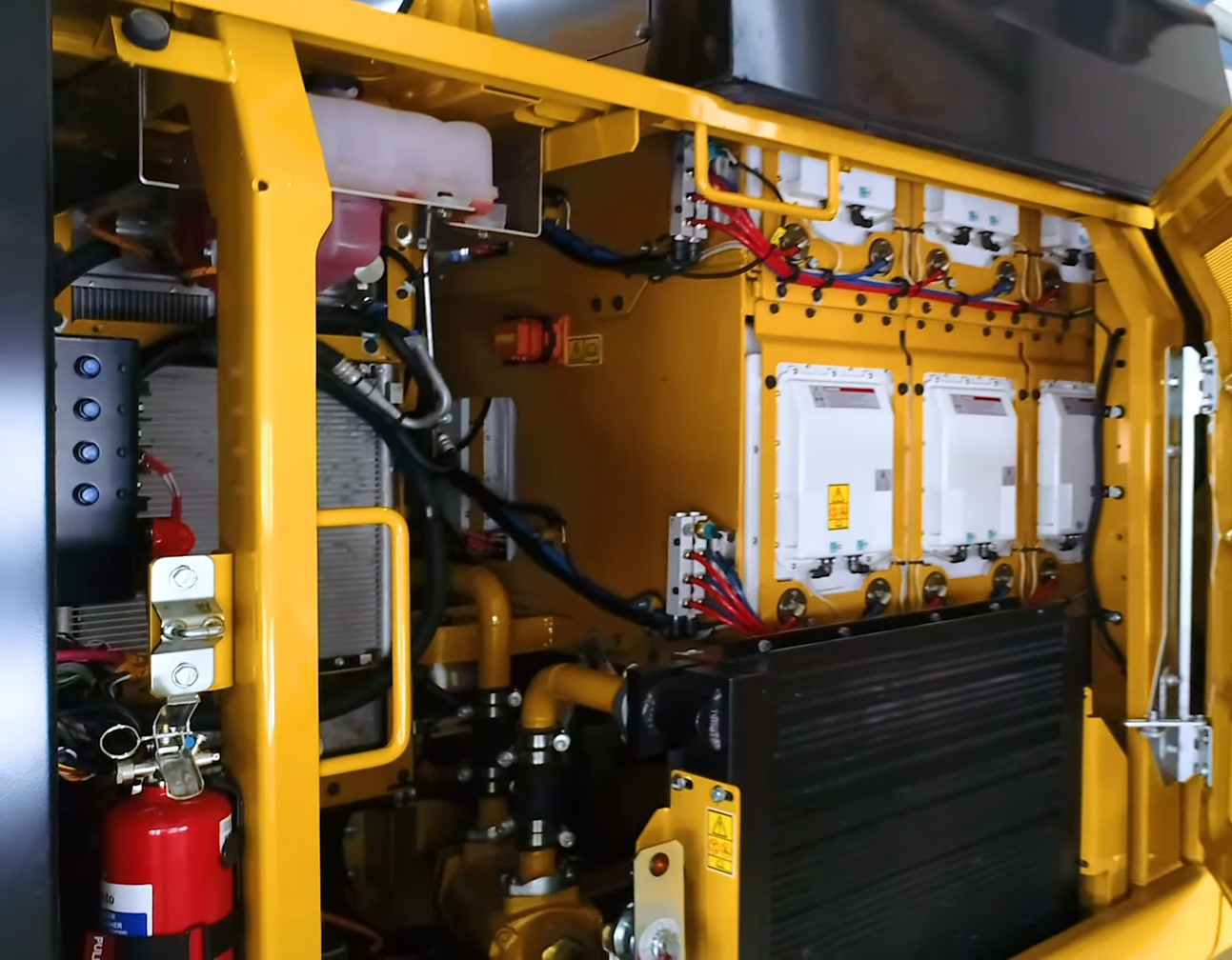 Behind the hatch of the Cat 323F Z-line on the same side of the vehicle as the cabin entrance. A stack of batteries is mounted above a heat exchanger for the hydraulic system. Source: Pon Cat

As the world’s first large-scale electric excavator, the Cat 323F Z-line has a price tag that reflects its innovative electric powertrain and sizable dimensions. The excavator costs approximately $680,800 (620,000 euros), around three times more than the diesel-powered Cat 323F.

The asking price is high, but the benefits offered by the vehicle are significant: no use of diesel fuel, no direct CO2 emissions, much lower noise and less maintenance than a diesel excavator. If electric excavators prove popular on the market, technology improvements and economies of scale could lower production costs, increasing their affordability.

In the meantime, regulations like those in Norway are driving adoption of environmentally friendly construction machinery. Norwegian construction company Veidekke has purchased eight of the electric excavators. The company estimates each 323F Z-line excavator will prevent the release of 52 tonnes of CO2. Replacing all of Norway’s approximately 2,500 excavators would offset carbon emissions equivalent to taking 60,000 cars off the road.

Re: How the world’s first large-scale electric excavator works
#1

Here's a picture of an even larger electric excavator- that could easily pick up one of these Cats in its' bucket! 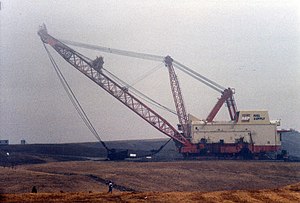 I guess a dragline isn't quite the same as a hydraulic excavator, so how about these?

Yes, I guess these are still wire rope shovels, not hydraulic excavators, but...

...this 1,800,000 plus pound midget still far outdoes the Cat! Although the model shown appears to be a diesel unit, Hitachi's website notes that it, as well as a number of its smaller siblings, are also available with an electric drive instead.

In all reality, the big keynote here is that someone's finally producing a battery powered unit that can give the versatility contractors look for in these units, as opposed to the dedicated requirements of a mining shovel.

Re: How the world’s first large-scale electric excavator works
#2

When I read this article I had to check the calendar to make sure it wasn't April the first. Pay three times the price for an excavator to run for quarter of a day of continuous work and then have it down for a similar time to charge.

Might be good in town but they are more often used in remote areas where there is no power source for recharging. So what do you do, buy three of them and a low loader to cycle them through the charging station so one is working, one is travelling/parked and one is on charge.

Then there is the statement that they can be connected to a supply for continuous work except that means trailing cables to a supply or have a "nasty smelly diesel" generator set to power them. I have worked with machines needing trailing cables and the logistics of shifting substations and cables limits the mobility.

I think one of these may excite a Tesla driver or a green regulator but for get them for general use and what about the ROI on one of these?

Re: How the world’s first large-scale electric excavator works
#3
In reply to #2
JNB

Pretty simple- just the same way that our former Ontario government managed to vastly increase our cost of electricity!

There's no question that these will have some advantages over a diesel unit- mainly in terms of maintenance and long term operating costs. But to pay off that price jump?!?!

Re: How the world’s first large-scale electric excavator works
#4

This Z-line machine points toward the power future. Battery-electric machines currently serve in especially emissions- and heat-sensitive environments such as in underground mining and urban earthworks, but remain cost-prohibitive for general adoption. Diesel-electric machines which are now rapidly proliferating will fill the gap for many years. Though still powered by diesel engine, they employ a generator, motors and power electronics to greatly reduce wear-prone drivetrain parts, enhance operator control and increase both fuel and operational efficiency. Battery-electric heavy machines will remain both a cost-control and feasibility challenge for years to come, but the nearer-future of diesel-electric will lay an ongoing groundwork for their eventual practicality.

Re: How the world’s first large-scale electric excavator works
#5

A good start... But shouldn't the advantages of servo motors be used to better advantage, by installing them in strategic points or combining further linkages to make the most of mechanical and electrical efficiency. "Just" "electrifying" machines is not the solution (assuming the reason for its conversion to an electrical digger is for efficiency purposes" "The excavator is nearly identical to the diesel-powered Cat 323F excavator, except its diesel engine has been replaced with an electric powertrain".

Obviously these machines need to be robust but to me some parts seem a little "over engineered" (therefore there is/would be a waste of material and energy in their original production and consumption of energy in their daily use), something for the design engineers to look at...

Re: How the world’s first large-scale electric excavator works
#6
In reply to #5
JNB

The simple fact is, servo motors would have limited facility in most excavation equipment except for propulsion and possibly excavator swing.

Additional linkages and gear train that would be required to provide the torque needed for arm movements and bucket breakout using servo motors will add lost efficiency due to friction etc., increase cost and wear points (which also means more grease points, not something an operator wants to hear), and some will be located on the arm and dipper stick- both place subject to dirt, abrasion and impact. Not a good place for this.

As far as being over-engineered, I'd beg to differ. The point of these machines is that the manufacturers want to sell them, and the only reason the purchasers want to buy them is so they can complete the work that justifies purchasing them. Comparing an excavator design to something like a car isn't even an apples and oranges comparison, it's more like apples and carrots. These machines have to be designed to work at near capacity for one or two shifts a day. What may seem over-engineering is the level required to let a typical machine reach a 10,000- 15,000 hour lifetime of this.