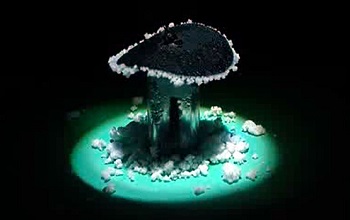 The performance of previously developed solar-assisted salt separation schemes is undermined by the crystallization of salts on photothermal materials. This can lead to a decline in the water evaporation rate or result in a final product with a less than desired drinking quality.

The problem is eliminated by using an evaporation disc composed of super-hydrophilic filter paper coated with light-absorbing carbon nanotubes. A 1 mm-diameter cotton thread channels seawater to the center of the disc, where the filter paper pushes remaining salt to the structure’s edge.

Tests demonstrated continuous steam generation and salt harvesting in over 600 hours of non-stop operation. The solar steam technology could be deployed in remote areas to supply freshwater resources and may find potential application in industrial wastewater and mine tailings treatment.