Desalination is used to produce water that is potable for drinking, industrial use and irrigation. The engineering challenges of desalination projects include not just technology, but also geography, environmental impact, finance and politics.

This second of two articles describes desalination facilities from four different parts of the world, each offering different features. The first article described an array of technologies used to desalinate seawater and brackish water sources.

Major seawater projects require the commitment of a great deal of capital before they begin. The earliest stages of the design process must consider operating costs in addition to the amortized repayment of the cost of design, construction and equipment. Construction cost often includes building long pipelines for the water input and even longer ones for delivering the processed water.

These expenses must be balanced against the expected income from water fees. For political buy-in, there has to be a generally acknowledged need. In some cases, even though the need is obvious, weighing that against cost and environmental impacts may cause hesitation.

For example, two large plants built on the eastern coast of Australia in the Gold Coast and Wonthaggi, Victoria, began in response to the so-called Millennium Drought, which lasted roughly from 1995 until 2009. By the time the plants were ready to provide water, the drought had abated. These plants have not been used but still need to be paid for. This has caused considerable debate, with one side arguing that the plants were a waste of money and the other saying that they remained a hedge against future droughts.

Neil Palmer, CEO of Australia’s National Centre of Excellence in Desalination (NCEDA), says that the desalination plants will last more than 50 years, “by which time they will have more than earned their keep by providing new water to our cities to compensate for weather variability (droughts), climate change and new demand from population growth.”

The government of the State of South Australia decided in 2007 that it was necessary to eliminate the dependency of more than 1 million residents, businesses and industrial plants on the Murray River, whose flows were becoming increasingly unreliable. Officials approved construction of a 50 gigaliter (GL) per year seawater reverse osmosis (SWRO) plant. This was followed by a second SWRO plant of equal capacity. The combination is projected to supply 50% of Adelaide’s water needs, although since the drought has ended for the moment, the plants are running at about 10% of capacity.

Seawater entering the plant goes through three progressively finer pre-filtration stages. The first stage is a series of screens that eliminate particles larger than 3 millimeter (mm). Next are disc filters that remove material greater than 0.1 mm, and the last stage is ultra-filtration membranes that remove material including bacteria and most viruses larger than 0.04 microns (µm).

Pre-filtering prolongs the intervals between cleaning and ultimate replacement of the reverse osmosis membranes. Salt is removed in a two-pass RO system and all water passes through two banks of membranes. About 48.5% of the water is retained for use, while the remainder, a highly saline concentrate, is returned to the sea. The desalinated water at each plant is stored in 25 GL storage tanks. From there it flows by gravity to a pumping station, which moves it through a transfer pipeline to an existing water treatment plant, where fluoride, lime, chlorine and carbon dioxide are added before the water enters the South Australia water system. An important feature of the Adelaide plant is that, it is powered by alternate energy sources, as required throughout Australia.

The desalination project at the 300-family village of Kotri stands in contrast with the 50 GL per year plants at Adelaide, although both use RO technology. The Kotri plant is self-contained and produces 600 liters per hour during a six-hour operating period, enough to provide for the needs of about 1,000 families. The villagers earn their livelihoods by drawing water from adjacent Sambhar Lake, which has 4,000–6,000 parts per million (ppm) of total dissolved solids (TDS), in order to produce salt by evaporation. However, the evaporated water is still too brackish to consume. 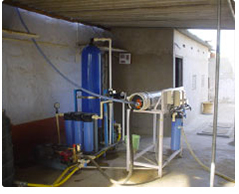 The Kotri desalination plant in India largely was built using locally available parts. Source: Barefoot College.org. The village's RO plant is constructed from readily available components: a booster pump, sand, carbon and cartridge pre-filters, along with the RO membranes. The desalinated water (450 ppm) is stored in a 5,000 liter tank. The entire plant is operated for six hours a day by a 2.5 kilowatt (kW) solar photovoltaic array, with enough electricity remaining for a computer, fans and light.

(Watch a video about the Kotri desalination facility.)

A desalination plant was commissioned in 2011 in the Almanzora Valley in the Province of Almeria in southeastern Spain on the Mediterranean Sea. It was built to compensate for the decreasing availability of water from underground aquifers and surface sources. Those water sources are needed as irrigation for fruit and vegetable agriculture as well as for the growing urban population.

One unusual feature of this plant is that the seawater intake is from 14 beach wells that provide a natural first stage of pre-filtering through the sand. The seawater is pumped to a 1.3 meter cubic (m3) regulation tank where it is retained for up to 14 minutes. From there it is transferred by four variable frequency driven (VFD) centrifugal pumps to the filtration system. The VFD pumps enable optimum control over flow and pressure.

Pre-filtration is managed through 10 pressurized sand filters followed by 20 µm microfilters. From there, the water is delivered to high-pressure pumps for the two-pass RO racks. The desalinated water is sent to a 72,000 m3 tank as an irrigation source and a 12,000 m3 tank where it is remineralized for human consumption. The plant can produce 60,000 m3 of desalinated water per day and can irrigate more than 12,000 hectares of agricultural land.

The Sahara Forest Project AS (SFP) is a Norwegian company established to “create profitable innovation and environmental solutions within food, water and energy sectors.” The company proposes to use restorative practices to establish vegetation in arid areas and reverse the trend of desertification. A collaboration between SFP researchers, fertilizer distributer, Yara ASA and Qatari fertilizer producer, Qafco, made possible construction of a pilot production facility in Qatar to demonstrate the feasibility of these goals. 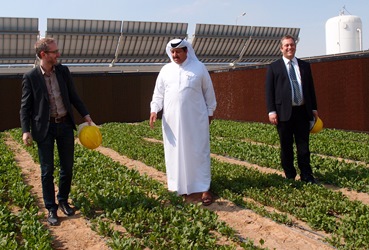 Cucumbers grown in the desert using seawater and solar power were harvested at the Sahara Forest Project pilot facility in Qatar. From left: Bard Vegar Solhjell, Norwegian Environment Minister; Khalifa A. Al-Sowaidi, CEO of QAFCO; and Joakim Hauge, CEO of Sahara Forest Project. Source: Sahara Forest Project In the pilot project, the only external inputs are seawater and sunlight. The system is driven by a concentrated solar power (CSP) unit that drives a multistage evaporative desalination system for producing fresh water, primarily to irrigate crops grown in a greenhouse. Waste heat from the CSP is used to warm the greenhouse in winter.

For a larger-scale installation, the CSP could be used to drive a steam turbine for electricity generation. For this pilot project, however, electricity is generated by a bank of photovoltaic panels. At one end of the greenhouse, seawater flows over a grid-like curtain through which desert air is blown into the interior. This process cools and humidifies the air, optimizing it for growing crops such as cucumbers, tomatoes, peppers and eggplants. The cool moist air coming out of the greenhouse flows over an array of evaporative pads that further concentrate the brine while creating a moist area for growing desert vegetation. The concentrated brine can be used to produce salt, halophytes(salt tolerant plant species) and algae, which may be sold for additional income.

The Future of Desalination

He suggests ways in which these costs could be significantly reduced. For example, rather than a single large plant, several smaller plants installed along the coast to deliver desalinated water into existing water supply systems could reduce the capital costs for building new pipelines.

“A number of identical plants would enable a production line to approach to construction” says Palmer, and “could enable efficient local manufacture of components. Smaller plants could also be staged and built when needed, reducing the need for large land acquisition.” These plants could be powered by their own generators rather than relying on electricity purchased from the grid.

Another cost-saving suggestion is to draw seawater from beach well intakes so that it is filtered through natural beach sand or subsurface strata. This, he says, could reduce the need for pre-treatment, which normally requires expensive multi-media or membrane filtration. This was the technique implemented in the Almanzora Desalination Plant.

“Growth in desalination is not linear, and it is tied to many other factors including the cost of oil, prices of certain commodities and availability of financing," says Patricia A. Burke, secretary general for the International Desalination Association. However, she says the underlying factors that have driven the growth of desalination remain in place, including population growth, industrial development, pollution of traditional water resources and climate change. To address these challenges, Burke says “The desalination industry has done much to lower the cost of desalination by developing technologies that lower energy requirements, by implementing practices that achieve greater operational efficiency and by adopting measures to enhance environmental stewardship.”