For Independence Day EIA profiles energy use since 1776

A combination of petroleum, natural gas and coal have made up at least 80% of energy consumption in the United States for more than a century. 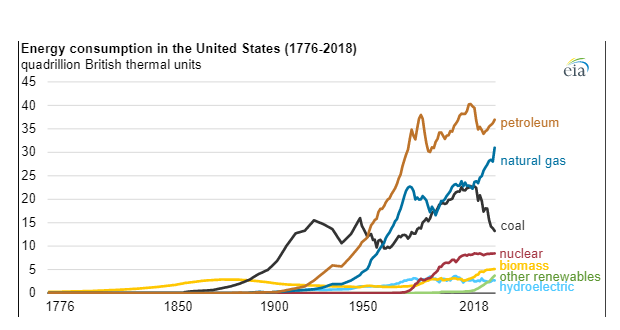 Energy consumption has undergone many changes in the nation’s history, from wood as a primary resource in the 18th and 19th centuries, to the onset of coal and petroleum use, and to the more modern rise of nuclear power in the late 20th century and renewables in the early 21st century. 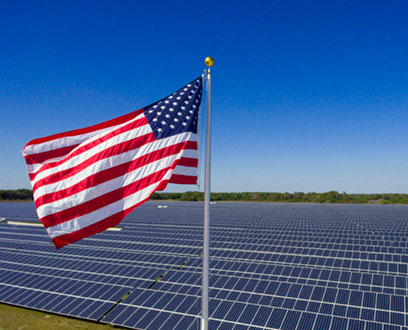 American flag with solar energy facility. Source: NextEra EnergyPetroleum consumption also increased in 2018 as petroleum product supplied reached the equivalent of 20.5 million barrels per day. EIA said that despite the increase, consumption remains lower than the peak level set in 2005. Petroleum has been the largest source of energy consumption in the United States since surpassing coal in 1950.

The renewable share of energy consumption in 2018 — which EIA said includes hydroelectricity, biomass and other renewables such as wind and solar — was 11.4%, slightly less than its 2017 share. The largest growth in renewables over the past decade has been in solar and wind electricity generation.

By posting a comment you confirm that you have read and accept our Posting Rules and Terms of Use.
Advertisement
RELATED ARTICLES
See How U.S. Energy Consumption Has Changed Since 1776
EIA projects 50% rise in world energy use by 2050, led by Asia
Coal Transport Declined in 2017, Continuing a Trend
Fossil Fuel Use for Power Fell in 2017, EIA Says
Manufacturing Shift Is Driving Down Energy Intensity
Advertisement