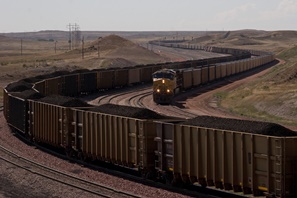 Coal train in Wyoming's Powder River Basin.The Energy Department's Energy Information Administration (EIA) says that nearly 70 percent of the coal consumed in the power sector in 2017 was shipped either completely or in part by rail. The remainder was shipped by river barge, truck and other methods.

In late May, EIA said that fossil fuel consumption for electric power generation fell to 22.5 quadrillion British thermal units (quads) in 2017. That was the lowest level since 1994. The trend was driven by a drop in the use of coal and petroleum, and was offset somewhat by an increase in the use of natural gas. 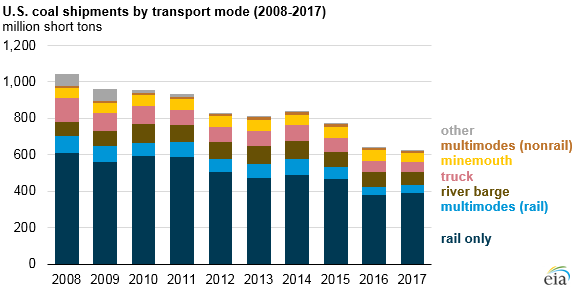 Source: EIAEIA says that the cost of transporting coal can vary greatly along different routes. In addition to costs associated with a particular mode of transport, factors such as route length, availability of transport mode, supply source options and the competition between coal and other commodities for transport can affect the transportation cost.

The real delivered cost of coal for all transport modes (commodity cost plus transportation cost) has fallen in recent years, most recently lower than $40 per ton in 2017. The real delivered cost of coal has fallen nearly $8.00 per ton (16 percent) since 2008, with most of the reduction attributable to declining commodity costs. Over that same period, overall coal transportation costs have fallen by 4 percent, as declines in truck (down 9 percent) and river barge (down 39 percent) costs more than offset a 3 percent increase in rail shipping costs.

By posting a comment you confirm that you have read and accept our Posting Rules and Terms of Use.
Advertisement
RELATED ARTICLES
Coal Exports Were Up in 2017, and India Was a Big Market
Which basin produces the most coal? The answer may surprise you
A Shipping Rebound on New York's Canals
U.S. Energy Growth and Dominance May Be Solid for Decades
No Coal Growth Through 2040, EIA Says
Advertisement