Electro-pneumatic (also known as E/P or I/P) transducers typically accept a standard current loop, often 4-20 mA, or a 0-5V or 0-10V voltage signal. As in all transducers, the device's output values must be calibrated with the input range to ensure accurate output pressure. Important calibration specifications include zero, the lowest possible pressure matched to the lowest input value, and span, the numerical value between the minimum and maximum output. Adding the span to the zero value yields the maximum output pressure for a calibrated device.

Analog E/P transducers were common in most pneumatically controlled automation systems during the mid- to late-20th century. Digital pressure controllers are now standard in most applications, although analog devices are still commercially available. This guide covers both types.

Marsh Bellofram Type 1000 I/P TransducerAnalog transducers contain a coil that, when magnetized by an input signal, creates a force imbalance on a piloted diaphragm. A typical device has three stages of varying pressures: an atmospheric pressure stage containing the coil, magnet, and input; a supply pressure stage consisting of a supply valve; and an output stage involving the regulated pressure produced as a result of the diaphragm's motion on the supply. The image at right shows each stage by means of color-coding.

E/P transducers like the one pictured use the piloted diaphragm to vent excess supply pressure through an exhaust valve to provide a proportional output pressure. Some transducers include an intermediary boost stage involving a second diaphragm and a valve seat to increase the regulated output pressure beyond the maximum supply pressure. Analog devices are capable of relatively low pressure outputs, typically up to 40 psig, when compared to newer digital regulators.

Analog transducer calibration involves the manipulation of two screws to adjust the zero and span values. If properly calibrated and maintained they are reasonably accurate, achieving repeatability of around 0.5% with 1% linearity and hysteresis. Digital regulators improve on these specifications and provide electronic feedback. 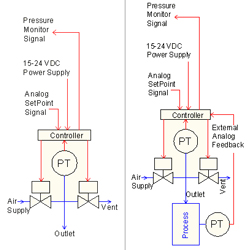 A typical EPR (left) and two-loop EPR, showing the addition of external feedback. Image credit: EquilibarElectronic pressure regulators (EPR) are effectively modern electro-pneumatic transducers and are referred to as electronic pressure controllers, electronic pressure valves, or electronic pressure transducers. EPRs require a power supply and a digital or analog set-point signal, and employ a push valve and a vent valve to regulate output pressure. These devices often include a feedback signal to increase accuracy and repeatability and may incorporate a bleed valve for venting low gas volumes. An EPR's maximum output pressure is greater than an analog device's, typically falling between 600 and 1000 psig.

Two-loop EPRs are specialized devices that incorporate a second pressure transmitter connected directly to the process. These are often used when pressure must be maintained in a remote location or when the quality of an existing transmitter exceeds that of the transmitter within the EPR. The external feedback signal results in improved accuracy and process efficiency. 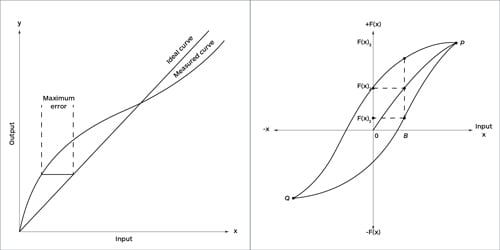 By posting a comment you confirm that you have read and accept our Posting Rules and Terms of Use.
Advertisement
RELATED ARTICLES
Valve positioner with explosion-proof housing for use with natural gas applications
Precision Regulators that Achieve Exceptional Repeatability and Accuracy
Pressure Gauges: How They Work and How to Specify Them
Digital Pneumatics: This Single Valve Device Replaces Over 50 Components
Verify product performance and reduce downtime with Himmelstein torque sensors
Advertisement