The spring thaw brings a welcome change from snow, wind and below-freezing temperatures. For residents of the Eastern and Midwestern U.S., the spring thaw also brings potholes. According to the Spring Pothole Report, the 2019 pothole season is already a doozy, brought on by an early freeze, then warmer weather, more freezing and ultimately a bomb cyclone. What are science and engineering doing to alleviate the suffering of motorists and highway departments?

Quite a lot – with improvements in all phases of pothole management, from predicting where potholes will develop to reporting locations to repair methods and materials. Tools include big data, non-Newtonian fluids, drones and 3D printing.

Where are the potholes?

Professor Pothole – Lucius Riccio, a Columbia professor and former Commissioner of New York City’s Department of Transportation – pioneered the use of big data for predicting the number of potholes to expect in a year. To this end, he developed a pothole prediction equation, derived from studying years of New York data: P=s+g.

This equation includes the resurfacing gap because Riccio concluded, again based on data, that poor resurfacing is responsible for 80% of potholes and harsh weather for 20%. Emphasizing bad maintenance contradicts the standard wisdom that snow, road ice and the freeze-thaw cycle are solely responsible for pothole formation.

On the market now

CarVi, which is a windshield-mounted camera that monitors driver alertness and beeps when a driver accidentally swerves out of their lane, is planning an over-the-air software update to teach the device to identify potholes. The company plans to share this information with local governments.

Houston’s Potholes Tracker asks residents to report pothole locations online or via smartphone. The tracker’s homepage provides an updated map with pothole locations and status of reported holes. City personnel, not drivers, identify the vast majority of these road hazards. Other cities have similar systems to collect driver reports. 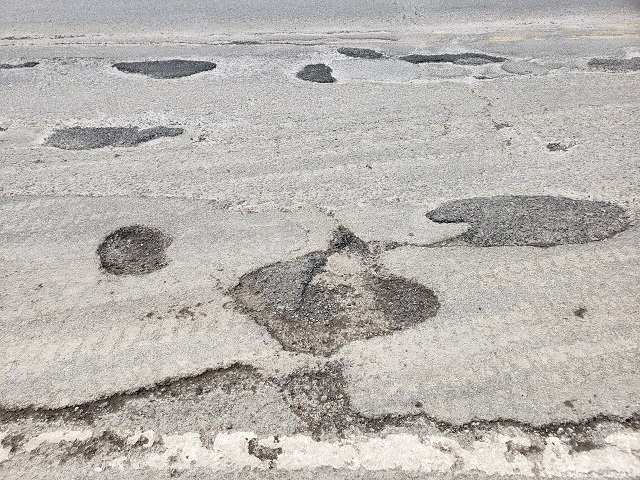 Syracuse, New York, implemented a GPS-based system that not only tracks the locations of the city’s public works trucks but also reports what each truck is doing – spreading salt, patching potholes – and records every instance when the hose that sprays patching emulsion fires off into a hole. This system eliminates the need for crews to record this information and creates a rich and accurate dataset for visualization and production of multiple reports. An additional benefit of this system: the data tell whether a patch is adequate or a complete street resurfacing is in order.

Public works trucks are not the only vehicles equipped to detect potholes and warn drivers to take action. Ford introduced a Fusion model with the capability in the 2017 model year and started offering the technology as an option for the 2018 Focus. Land Rover made a splash in 2015 when it introduced its pothole avoidance system, but the system is not yet a consumer option. Also in 2015, Google patented a pothole detection system; this system might find its way into the company’s driverless cars.

Several cities are collecting road-condition data using sensors attached to road-repair trucks and analyzing the data to develop pothole location prediction models. A Pittsburgh-based company, RoadBotics, hires drivers to collect smartphone video of city streets and then applies artificial intelligence to analyze road surfaces the way an engineer would. Kansas City’s pothole prediction incorporates weather and traffic data with pavement conditions in its prediction model. This comprehensive model allows the city to proactively repair a street deemed highly likely to develop problems before a motorist loses a tire – or their temper.

Researchers at Purdue University are working with the city of West Lafayette, Indiana, to enable cost-effective, precision pothole location. Using a sensor system rather than humans to identify potholes would be suitable if the sensor system was reasonably priced. The Xbox Kinect, a gaming platform, meets several requirements: it is inexpensive; it detects distance and color like a camera; and it can handle the large amounts of data generated when a maintenance department deploys multiple detection devices. The Purdue team paired the Kinect with a GPS to create a complete detection-and-location system.

How to fix a pothole

An understanding of current pothole repair practices is a useful precursor to reading about new methods. Standard pothole repair protocols depend on the severity of the defect, air temperature and road temperature. To fill a garden-variety hole, a road crew cleans out the hole, evens up the edges, fills the hole with hot-mix asphalt and compacts the fill material. Shallower holes and pavement cracks can usually be repaired with surface patching.

This method works when temperatures are warm enough. The definition of warm enough varies, Using a propane torch to heat asphalt in a quick pothole repair. Image source: U.S. Air Forcedepending not just on air temperature, but the temperature of the road and the roadbed at the bottom of the patch. Asphalt has to stay at 185° F to be successfully placed and compacted. Cold weather dictates emergency patching if a pothole is severe enough to warrant a temporary repair. Throw-and-go patches are just that: clean debris from the patch area, throw hot asphalt in the hole and compact it using the asphalt truck tires. Throw-and-roll requires preparation more like that required for a permanent patch.

Asphalt mixes can vary with location. As most drivers will attest, no asphalt patch is permanent for a road with more-than-minimal traffic, regardless of the recipe followed to make the patch. A Scottish company, MacRebur, uses granulated plastic waste in its asphalt mixture. Pelletized plastic enhances and extends the bitumen used in asphalt. The company has laid roads worldwide, including in its homeland of Scotland, and claims that the plastic gives the asphalt more flexibility. Each kilometer of plastic road contains the equivalent weight of 684,000 plastic bottles or 1.8 million one-time use plastic bags. MacRebur is putting its Scottish roads to the test to develop new paving and pothole repair technology in research sponsored by the British government.

In 2016, University of Minnesota Duluth researchers started testing a locally sourced, non-asphalt patching material, taconite. Taconite tailings, a byproduct of the production of iron pellets in Minnesota’s Iron Range, are ground up, mixed with an activating fluid and stuffed into the pothole. When the researchers checked on their two-plus-year-old patches in March 2019, they were pleased with the results. They are currently testing samples taken from these patches in the lab. The taconite mixture is not yet ready for market, but it does show promise as a future patch material.

One approach to improving pothole repair is to prevent potholes from forming by using self-healing asphalt. Researchers at TU Delft have paved 12 roads in the Netherlands with a special asphalt mix that includes small steel fibers. When a crack appears, just add heat using a large induction machine and the cracks disappear. Lead researcher Erik Schlangen speculated that roads with these embedded fibers might also work as chargers for electric vehicles. Schlangen founded Epion to bring the new product from the lab to the street.

A team at the University Of Leeds' School of Mechanical Engineering is leading research on a combination pothole search-and-repair system. The project, which started in 2016, uses a drone to spot pavement cracks and holes. The drone then flies down and sprays 3D-printed asphalt onto the fault. This system offers two big advantages over other pothole management protocols. The drone’s camera spots problems when they are still small and easier to repair, and it does its work at night when traffic volume is low.

Developing the 3D printer presented some difficulties, particularly because asphalt behaves as a non-Newtonian fluid when moving through the printer’s extruder. The printer also needed to maintain a temperature high enough to extrude and place asphalt in the road fault. A team at the University of London resolved the printing problems in part by determining an optimal printing temperature. They also noted that 3D-printed asphalt has superior ductility to conventional asphalt and this ductility introduces microstructural changes that produce crack-bridging fibers – a boon to asphalt repair.

The pothole-plugging drone is part of the Self Repairing Cities project headquartered at the University of Leeds. The project’s goal is zero disruption from street work in U.K. cities by 2050.

Some students at Case Western Reserve University tested a clever temporary patching method that, sadly, has gone nowhere since they were awarded a patent. Their idea exploited a characteristic of some non-Newtonian fluids – their tendency to solidify when exposed to pressure – to develop a temporary pothole patch.

Rather than use familiar forms of oobleck like silly putty and cornstarch and water, the students tested different fluids to find an optimum pothole filler. The powder precursor is stored in a Kevlar bag. When a road crew needs a patch, they add water to the bag and deposit it in the pothole, covering the bag and hole with a sheet of heavy rubber. When a car tire runs over the patch, the car’s weight converts the fluid to a solid. Testing in Cleveland during temperate conditions went well, but the oobleck’s sturdiness in a typical Ohio winter is yet to be determined.

Take care of the repair trucks too

Passenger vehicles are not the only victims of potholes and other road hazards. When a public works truck blows a tire, that truck and its crew are off the job for several hours. A Michigan company claims that their new product, SuperMag, contributes to pothole repair by removing debris that can puncture tires and knock a repair truck offline. Storch Magnetics designed SuperMag to fit on a standard snowplow mount, or it can be towed behind a road maintenance vehicle. When lowered to the road surface, the powerful industrial magnet picks up metal debris, leaving a safer stretch of road for other repair trucks and vehicles.

The future of potholes

Potholed roads are one element of the U.S.’s crumbling infrastructure, and an element that is not difficult to repair but is unavoidably recurrent. The research projects described here could contribute to longer-lived road patches. Other factors, such as reduced road traffic as drivers become Uber or Lyft riders, could also help patches and resurfaced roads last longer.

Improved road construction and maintenance technology, including design, roadbed preparation and construction materials, will also reduce potholes. The National Center for Asphalt Technology is currently researching methods for preserving and rejuvenating existing asphalt. Likewise, the National Concrete Pavement Technology Center is sponsoring research on concrete curing and the use of geotextiles in concrete. The American Society of Civil Engineers (ASCE), through its Grand Challenge program, invites engineers to propose novel ideas for infrastructure improvement.

Since implementing any improved technologies will depend on government funding, the future of road construction and maintenance lies in the hands of local, state and federal legislators. Given the height of this hurdle, in all likelihood, potholes will continue to plague drivers and public works departments.

There seems to be some controversy in using plastics with the asphalt for repairs and/or paving, it seems as it wears it introduces micro plastics to the environment...and in doing so introduces it into the food chain...if true, this is a really bad unintended consequence and should be halted immediately, and possibly remediation is required....burn it...

Can you point us to articles about the controversy? I didn't run across anything when I was researching this article but I wasn't looking specifically for plastic-enhanced asphalt.

Vulgar/Rude/Improper Behavior: This post was deleted because it did not adhere to the behavioral policies of the site. Please review Section 14 of the CR4 Site FAQ and the Rules of Conduct.