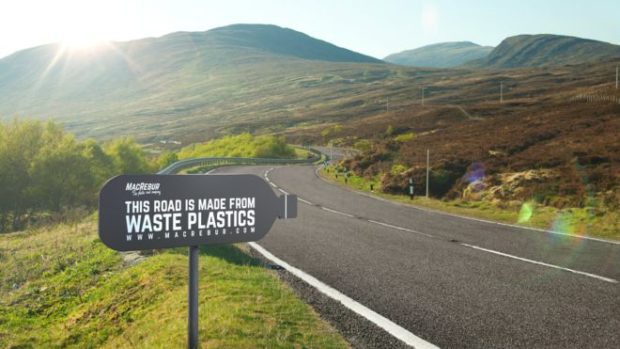 The company, called MacRebur, has been creating asphalt mixtures using granulated plastic waste. Once collected, the plastic is pelletized and added to an asphalt mixture. The MacRebur mixture enables the bitumen commonly used in asphalt production to be enhanced and extended, thereby cutting down on the amount of fossil fuel used.

Inspired by his work with a Southern India charity where he assisted people working in landfills gathering waste to put to other uses, CEO Toby McCartney noted that some of the plastic waste recovered from landfills was used to fill potholes. The waste was placed in potholes and set on fire, melting into the craters and forming a plastic pothole filler.

Looking on their recipe as a possible solution to the issue of ocean plastic pollution, the company explained that a 1 kilometer road composed of their asphalt could be the equivalent of 1.8 million plastic bags or 684,000 plastic bottles, diverted from the ocean or landfills.

According to McCartney: “Our technology means that we can not only help solve the problem of plastic waste but also produce roads that cope better with changes in the weather, reducing cracks and potholes.

“That’s because our roads are more flexible thanks to the properties of the plastic used in them, so although a MacRebur road looks the same as any other, it has improved strength and durability.”

“Our technology also means there are no plastic microbeads present in the mix and we can even recycle the road at the end of its lifespan, creating a circular economy that is sustainable and cost effective.”

By posting a comment you confirm that you have read and accept our Posting Rules and Terms of Use.
Re: Company paves roads with plastic
#1

That is fantastic!! BUT there are not enough plastic bottles AVAILABLE to get very far down the road.

Re: Company paves roads with plastic
#2

What about road degradation: tons of plastic fines will end up in the ambient. These fines are much more dangerous.