First flight with renewable fuels from the desert

In response to growing regulatory demand for sustainable aviation fuel and emissions reductions, the commercial aviation sector has started to witness a gradual shift from the use of conventional aviation fuel to renewable fuel. More than 100,000 commercial flights have already successfully flown on biofuel blends, and 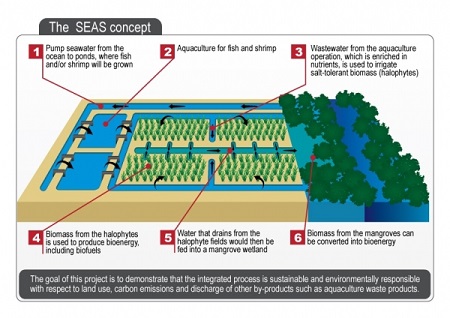 In the U.S., United Airlines is the first to commit to reducing its own greenhouse gas emissions by 50% by 2050, relative to 2005. The company recently operated a flight from San Francisco to Zurich with the fuel-efficient Boeing 787 and 16,000 gallons of biofuel at a 30/70 blend with conventional jet fuel. Virgin Atlantic’s VS16 flight on Oct. 2, 2018, from Orlando, Florida, to Gatwick Airport in London marked the first commercial flight to use an advanced aviation fuel produced by recycling waste industrial gases.

More recently, a flight from Abu Dhabi to Amsterdam has been hailed as the world’s first commercial flight using locally produced sustainable fuel on an Etihad Airways Boeing 787. As a partner in the non-profit Sustainable Bioenergy Research Consortium, the airline sourced the fuel from the Seawater Energy and Agriculture System, an integrated platform of aquaculture, halo-agriculture and mangrove silviculture to produce sustainable biofuels for aviation and food products from seawater in the desert.

The two-hectare farm cultivated Salicornia plants, which were processed to yield the renewable fuel for the flight. UOP-Honeywell’s Ecofining technology, used to refine the seed oil, produces a renewable aviation fuel that can be blended seamlessly with petroleum-based fuel. Use of the alternative fuel requires no aircraft modifications.

By posting a comment you confirm that you have read and accept our Posting Rules and Terms of Use.
Advertisement
RELATED ARTICLES
Qantas 787 Flies From LA to Melbourne Using Mustard Seed Biofuel
High-density aviation fuel produced from plant wastes
Airline Uses Renewable Biofuel for Regular Flights
Cellulosic Jet Fuel for Use on Commercial Flights
Alaska Airlines to Test ATJ Biofuel Blend
Advertisement