A shift from conventional petroleum-derived fuels to biomass-based aviation fuel is being increasingly promoted to curb greenhouse gas emissions and improve sustainability in the transportation sector. A biofuel production process engineered by researchers from the Chinese Academy of Sciences and Tianjin University can contribute to this transition by exploiting agricultural and timber harvesting wastes.

A high-density aviation fuel, which can increase aircraft range, is derived by converting cellulose into a polycycloalkane mixture. Tuning the reaction conditions also supports the selective production of methyl 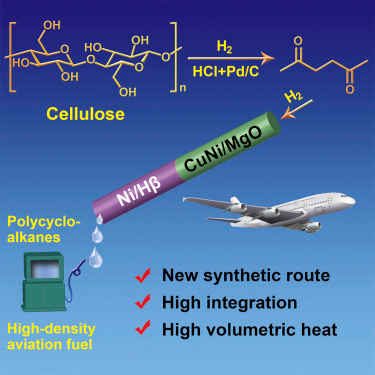 Polycycloalkanes derived from lignocellulose can be used as high-density aviation fuel or fuel additives. Source: Chinese Academy of Sciencescyclopentane, which can be used as a high-octane gasoline additive. Benefits of the technology, described in a paper published in Joule, include the use of cheaper feedstock, mild reaction conditions, fewer steps and a lower freezing point of final products compared to traditional fuel.

Hydrogenolysis results in the selective conversion of cellulose to 2,5-hexanedione using hydrogenolysis. A mixture of branched polycycloalkanes is then obtained in a carbon yield of 74.6% by the aldol condensation-hydrogenation and hydrodeoxygenation reaction of 2,5-hexanedione and hydrogen over a dual-bed catalyst system. The final product is a mixture of C12 and C18 polycycloalkanes with a low freezing point and a density about 10% higher than that of conventional jet fuels.

Initiatives to use emissions-reducing alternative aviation fuels are expanding globally. As part of a commitment to halve greenhouse gas emissions by 2050 relative to 2005, United Airlines recently operated a flight from San Francisco to Zurich with the fuel-efficient Boeing 787 and 16,000 gallons of biofuel at a 30/70 blend with conventional jet fuel. Virgin Atlantic’s VS16 flight on Oct. 2, 2018, from Orlando, Florida, to Gatwick Airport in London marked the first commercial flight to use an advanced aviation fuel produced by recycling waste industrial gases.

Increased use of biomass-based aviation fuels can reduce soot emissions and subsequent contrail formation, according to analyses conducted by German Aerospace Center researchers. An 80% reduction in soot-related ice crystal formation associated with the use of a 50:50 blend of biofuel and Jet A aviation fuel can halve the climate impact of contrail cirrus.

By posting a comment you confirm that you have read and accept our Posting Rules and Terms of Use.
Advertisement
RELATED ARTICLES
Biofuel use reduces aviation emissions and contrail cirrus climate effects
Sourcing sustainable aviation fuel from stinkweed
First flight with renewable fuels from the desert
United Airlines Buys Stake in Biofuels Producer
Revised ASTM Standard Allows for More Biofuel Contamination in Jet Fuels
Advertisement