A four-volume conceptual design report prepared by the Future Circular Collider (FCC) collaboration presents different options for a new large circular collider. The collaboration has involved more than 1,300 contributors from 150 universities, research institutes and industrial partners who actively participated in the design effort and the R&D of new technologies. The group aims to prepare for the sustainable deployment and efficient 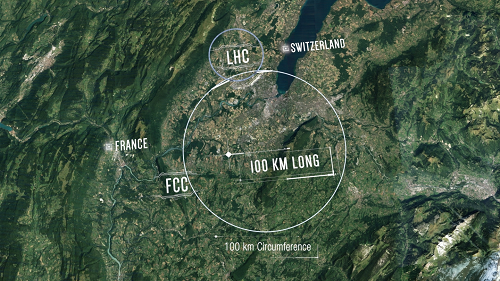 The particle physics community plans to update the European Strategy for Particle Physics and develop a research roadmap that extends beyond the horizon of the now-closed Large Hadron Collider (LHC). The discovery of the Higgs boson at the LHC opened a new path for research, and detailed studies of its properties are a priority for any future high-energy physics accelerator.

The initiative seeks to build a 100-km superconducting proton accelerator ring with an energy of up to 100 trillion electron volts — an order of magnitude more powerful than the LHC.

The FCC proton collider would deploy new-generation high-field superconducting magnets to enable observations of how a Higgs particle interacts with another Higgs particle and support exploration of the role of electroweak symmetry breaking in the history of the universe. The facility would also collide heavy ions, sustaining a heavy-ion physics program to study the state of matter in the early universe.

An initial step is envisioned as a 90 to 365 billion electron volt electron-positron machine with high luminosity, which would make it possible to detect new, rare processes and measure known particles with unprecedented precision.

The cost of a large circular electron-positron collider is estimated to be in the 9-billion-euro range, including 5 billion euros for the civil engineering work for a 100 km tunnel. This collider would serve the worldwide physics community for 15 to 20 years. The physics program could launch by 2040 at the end of the High-Luminosity LHC. The cost estimate for a superconducting proton machine that would afterward use the same tunnel and begin operation in the late 2050s is around 15 billion euros.

By posting a comment you confirm that you have read and accept our Posting Rules and Terms of Use.
Advertisement
RELATED ARTICLES
Upgrades Planned for LHC During Two-Year Shutdown
Watch: First Precise Measurement of W Boson Mass
The LHC Successfully Accelerated Its First Atoms
The New Couple in Particle Physics: Higgs Boson and Top Quark
DOE taps Brookhaven Lab for particle collider
Advertisement