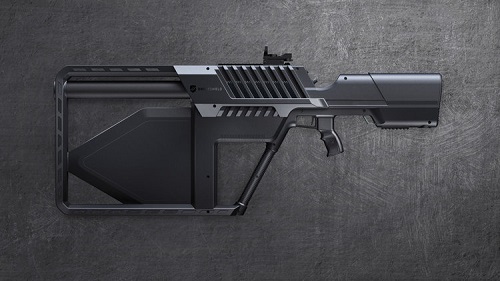 The jammer is a safe countermeasure to drone dangers. Source: DroneShieldDroneShield believes it has a drone deterrent called DroneGun Tactical, a portable, rifle-shaped jammer for military and commercial use.

The company said DroneGun Tactical provides a safe countermeasure against a wide range of drone models and safely manages drone payloads, including dangerous ones like explosives, with no damage to the drone or environment. The jammer forces a controlled vertical landing or returns the drone back to its starting point.

The drone countermeasure has a range up to 1 km, is battery powered and requires no training to operate, DroneShield said. The rifle jammer ceases video transmission to the drone operator, simultaneously operates on multiple RF frequency bands and has an optional global navigation satellite system (GNSS) disruption capability.

With a growing number of drone incidents and drone threats to the public, the counter-drone market is heating up in conjunction with the growing consumer and military drone market.

Among those drone incidents is a recent scare at England’s Gatwick Airport, where a number of drones flying near the runway shut down the airport for two days, leaving 1,000 aircraft grounded and affecting about 140,000 passengers.

The dangers of drones colliding with airplanes has yet to be fully realized and some experts are examining what might happen. Mid-air collisions need to be taken seriously, given how drones have been used as weapons against military in the Middle East.

Interesting tech. And only to be expected, not only for the reasons cited in the article (public safety and military op disruption) but also for the use of private citizens wishing to "Stay Private" (at least in their activities). And, as all will no doubt note, the obvious spinoffs then are:

2) Plans (and KITS!) to build your own (with obvious applications of improvements thought of and worked out by the private sector)

3) Leading to, vapors in Congress and among the unelected bureaucrats resulting in bans on such horribly lethal weapons in private hands

I love the tech, but I see all kinds of legal miscondu... shenanig... um, hang it, trouble, on the horizon.

Anti-drone systems have become a need with the proliferation of drones and their multiple, and sometimes nefarious applications. Govt regulations to prevent drones from causing harm to private and public assets need to be formed and effectively implemented. At present, I think, the governments are a bit lagging in this aspect, whereas drone designers and manufacturers are galloping.

It is however, very heartening that technologists are doing their best to evolve technologies that will deter drones from being naughty and/ or destructive.

Re: Video: DroneGun jams UAVs to prevent attacks
#3
In reply to #2
micahd02

Govt regulations to prevent drones from causing harm to private and public assets need to be formed and effectively implemented.

In the USA is why I mentioned unelected bureaucrats in my post. They basically panicked and created a stupid regulation so far-reaching as to be unenforceable, which makes them look as stupid as many no doubt are, and invites miscreants to transgress in the certain knowledge that so many otherwise innocent flyers with no prospect of carrying or delivering enough of anything, nor enough mass/range/ceiling to even remotely interfere with flight safety or do something else deliberately nefarious will, solely by their ownership of drones, overload any hope of catching the real bad actors. And as usual it requires taxes/fees just to be allowed to fly, and MORE fees should the flyer even THINK of letting someone make even one penny from a photo or video, (even if Facebook uses MY photo from MY page, I'M guilty if I didn't pay to be allowed to make money on MY photo. Which, note, I didn't sell or authorize for sale. Read the regs. I personally spoke to one of their authors.), thus demonstrating that the real intent of the regulatory saturation was to get more money into the coffers.