Bennu is visible in motion against a backdrop of stars in the constellation Serpens in OSIRIS-REx’s first images of the asteroid taken with its PolyCam camera on August 17. Source: NASA/Goddard/University of Arizona

A spacecraft that will return the largest specimen from space since the moon rocks of the Apollo era is on the final approach to its target asteroid. The Origins, Spectral Interpretation, Resource Identification, and Security-Regolith Explorer (OSIRIS-REx) has snapped its first photograph of asteroid Bennu, still 2.2 million km in the distance. In just a few months’ time, OSIRIS-REx will arrive at Bennu to begin survey operations, ultimately culminating in a sample recovery to return a piece of the asteroid to Earth.

OSIRIS-REx is the third mission in NASA’s New Frontiers space exploration program, following in the footsteps of New Horizons, which charted Pluto for the first time in 2015, and Juno, which has been studying Jupiter since July 2016.

Getting their hands on a piece of Bennu will give scientists a chance to analyze part of the remains of the original building blocks of the solar system. Bennu is a carbon-rich B-type asteroid, a category of asteroids believed to be nearly unchanged since their formation in the early solar system 4.5 billion years ago. Understanding these objects is important for the knowledge of how planets form.

Bennu might also provide insights into the origin of life. The asteroid might contain organic compounds like amino acids, which are the building blocks of proteins, or macromolecules, which are an essential component of all living organisms.

Studying Bennu will also give scientists a better understanding of the hazards posed by near-Earth asteroids. Bennu travels around the sun in an orbit similar to Earth’s, coming close to our planet once every six years. There is a small chance the asteroid will collide with Earth in the late 22nd century. 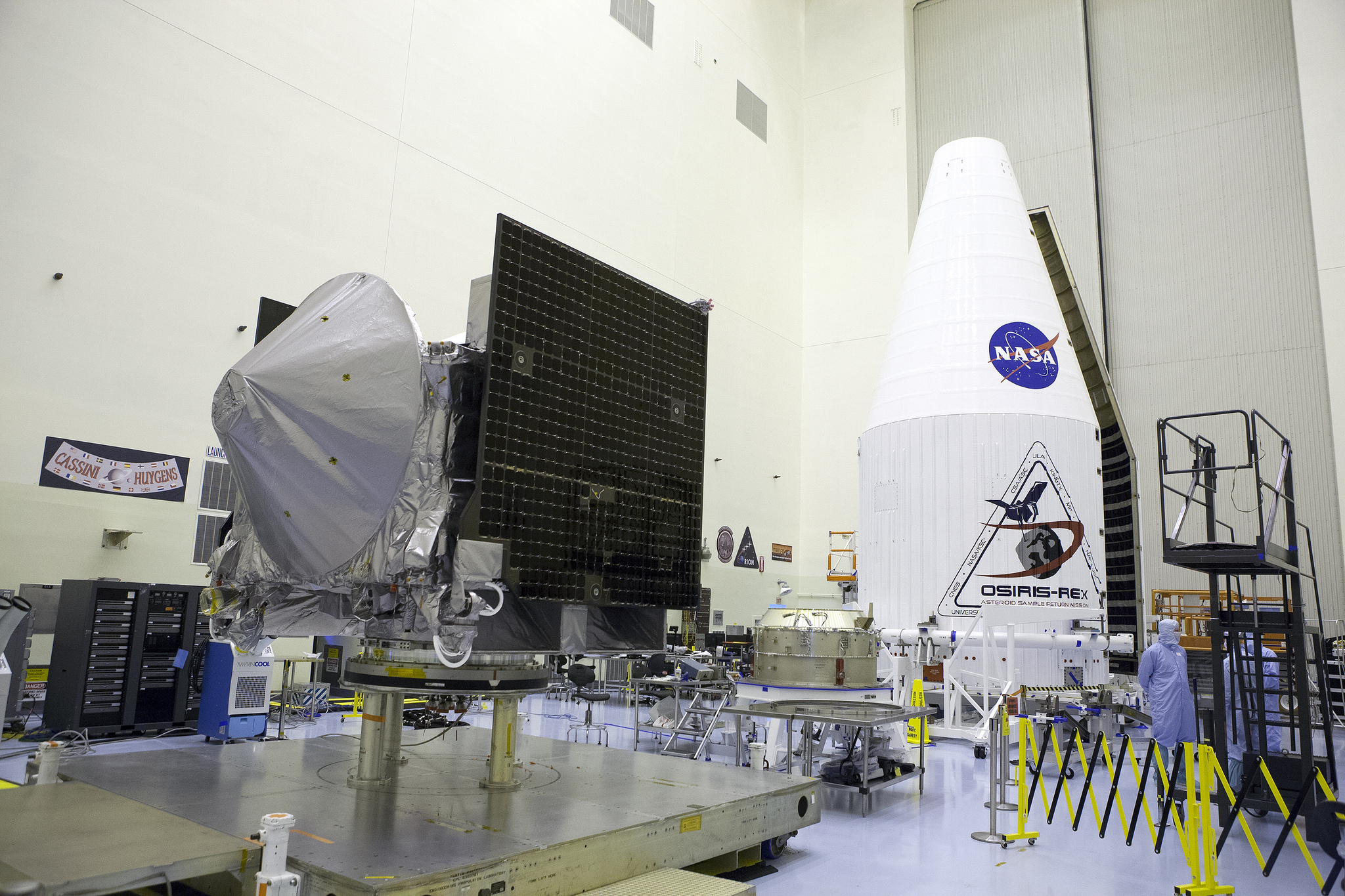 OSIRIS-REx sits on the floor of the Payload Hazardous Servicing Facility at NASA’s Kennedy Space Center next to the payload fairing that will protect it during its launch atop an Atlas V rocket. Source: NASA/Glenn Benson

After launching from Earth in September 2016, OSIRIS-REx orbited the sun for a year before exploiting the planet’s gravity to slingshot itself onto a path to rendezvous with Bennu. OSIRIS-REx is currently traveling at an average speed of 28 km/s as it catches up to the asteroid. To slow down, the spacecraft will fire its thrusters in a sequence that begins on October 1, ultimately shaving 0.53 km/s off its velocity to approach Bennu at a relative speed of just 20 cm/s.

Precise navigation in the vicinity of Bennu will be no easy task. Only half of the forces acting on OSIRIS-REx will be due to the 500 m diameter asteroid’s gravity. The remainder will be due to variable solar winds and the pressure of sunlight. Navigators will compensate for this by frequently observing Bennu’s surface and the backdrop of stars to precisely locate the spacecraft in relation to the asteroid. The dominant method of navigation at Bennu will be landmark-based, in which location will be determined by referencing maps created by the spacecraft’s instruments.

Once OSIRIS-REx reaches Bennu on December 3, the spacecraft will begin surveying the asteroid with its suite of five instruments. The process, lasting over a year, will characterize the object’s shape and composition and generate a detailed map of the rocky body so that scientists can select the most promising site for sample collection. 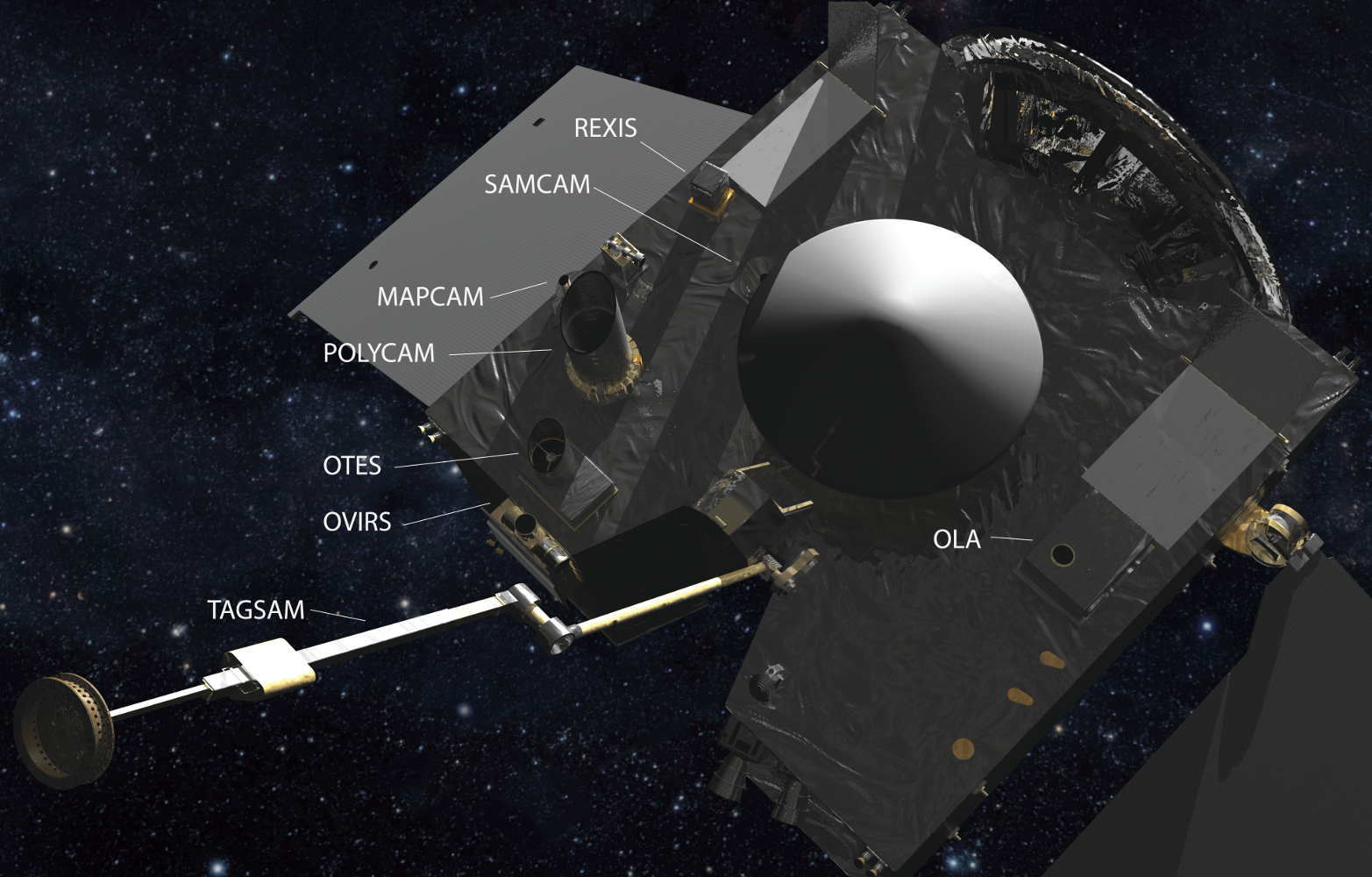 OSIRIS-REx’s instrument deck consists of various imaging devices that will study Bennu at a variety of wavelengths. Source: NASA/Goddard/University of Arizona

OSIRIS-REx’s collection of instruments includes multiple cameras and spectrometers. The spacecraft’s three imaging cameras are named PolyCam, MapCam and SamCam. PolyCam was the first instrument onboard OSIRIS-REx capable of resolving Bennu, capturing the asteroid as a few grainy pixels 2.2 million km away. The 20 cm telescope will also provide high-resolution, close-up images of Bennu once OSIRIS-REx is in orbit about the asteroid. MapCam, meanwhile, will image Bennu in 4 colors down to a resolution of 1 m, while SamCam will snap a picture as quickly as once every 1.6 seconds, recording the critical moments during which OSIRIS-REx collects a sample from the surface of the asteroid.

The spacecraft’s Regolith X-ray Imaging Spectrometer (REXIS) will image the X-ray fluorescence line emissions of the asteroid’s rocky exterior to identify the presence and abundance of elements on the surface. As a student collaboration experiment, students at Harvard and MIT will analyze data from the instrument as part of their studies.

OSIRIS-REx’s Visible and Infrared Spectrometer (OVIRS) will identify the minerals and organic materials on Bennu by detecting their unique spectral signatures from 0.4 to 4.3 microns. The spacecraft’s Thermal Emission Spectrometer (OTES) will study the asteroid at infrared wavelengths from 5 to 50 microns to detect its mineral composition and map the surface’s temperature distribution. A precise plot of the asteroid’s thermal profile will allow scientists to advance their understanding of the Yarkovsky effect, a phenomenon that describes how the heat that an asteroid absorbs from the sun is then re-emitted, causing a thrust effect that slightly alters its orbit.

OSIRIS-REx is also equipped with a laser altimeter (OLA), a scanning lidar instrument that will chart the topography of the asteroid.

Following the survey phase, mission controllers will verify OSIRIS-REx’s flight performance by performing two sample collection rehearsals in which the spacecraft approaches the asteroid’s surface without actually making contact. Once the spacecraft’s approach plan is confirmed, it will descend toward Bennu to collect a sample of the asteroid at the site selected by mission scientists.

The container at the end of OSIRIS-REx’s sampling arm will gather up to 2 kg (4.4 lbs) of Bennu’s regolith with contact pads and a puff of nitrogen gas that directs material into the collection chamber. Source: NASA

To complete this operation safely, OSIRIS-REx will avoid the dangers of landing. Instead, it will essentially bounce off the asteroid in a touch-and-go maneuver during which its sampling arm – the Touch-and-Go Sample Acquisition Mechanism (TAGSAM) – will be in contact with the asteroid’s surface for only five seconds. During this brief period, a strong puff of nitrogen gas will blow between 60 g to 2 kg of pebbles and dust into the sample collection chamber. The sample container will then be stored in a capsule attached to OSIRIS-REx for return to Earth.

When the spacecraft reaches Earth’s vicinity in September 2023, it will release the capsule and fire its thrusters to enter an orbit around the sun. The capsule will travel another four hours until it slams into the atmosphere at 12.4 km/s. Protected from the violence of re-entry by a heat shield, the capsule will first deploy a drogue parachute and then a main parachute before touching down in the Utah desert, where the mission team will collect the sample nestled within.

It is only then that scientists will begin probing this primordial cache to reveal the secrets it might hold. The sample will be a source of continuing insight into the early solar system; three-quarters of the material returned from Bennu will be set aside for future generations of scientists to analyze with increasingly advanced equipment.

Re: Spacecraft Will Snatch a Piece of an Asteroid and Return it to Earth in Daring Touch-and-Go Maneuver
#1

Sure sounds like the "Andromeda Strain" story line to me.